In 99 days, this painful, divisive election will be history. Who will we as followers of Jesus be after November 8th?

Again I ask: who will we be as followers of Jesus after November 8th? Will we join in the fear, anger, and finger-pointing that inevitably will be going on around us?

This question was crystallized for me during the last few days when I was surprised by the surprisingly rabid, militant support of one of the candidates by an old friend. My friend was once known for his gentle pacifism, but has taken a hard, fearful turn from those convictions this year.

History has given us some really great Christian counter-cultural role models beginning with the early church, who accepted the reality that they had to honor God by disconnecting from syncretistic political involvement though it made martyrs out of some. At the same time, this community of called-out ones were identified by their willingness to care for society’s most vulnerable in self-sacrificing ways. When some church leaders cozied up with those in political power by the time of Constantine in the fourth century, it instigated a quiet exodus of spiritual revolutionaries into the desert. For generations, reformers and rebels embraced their outlier status, living the gospel in word and deed, though it cost almost all their social standing and others their lives. The understood themselves to be, as the King Jimmy Version puts it, a peculiar people.

What will it look like for us to be peculiar people at this moment in American history?

Christians in this country have gotten quite comfortable with being a majority voice, so much so that our pilgrim muscles have gone soft. Our last attempt to hold on to the privilege this majority status has given us has been a generation-long Moral Majority/Christian Coalition et al bed down with the Republican Party. No matter who wins the election, we who wish to be serious followers of Jesus must recognize it is time to hit the spiritual gym and begin exercising those pilgrim muscles once again so we can walk with self-control, strength, courage, and love.

The gym is our local congregations. There are contrasting and intense opinions about both major party candidates held by members of many churches this year, more so than in any election in my lifetime. We’ve gotten the candidates we’ve asked for, which is a topic for about 30 other posts. But there’s no doubt the opining on social media has fueled the intensity of our national conversation. (I’ve shared some op-ed pieces and retweeted other bits that have resonated with me, so I am aware as I write these words I’ve done my part to add to the noise.) You don’t have to be a prophet to recognize that things are only going to get more intense in the next 98 days leading up to election day.

But now is the time to consider who we want to be the day after the election. I am sobered by remembering that we become more tomorrow of the people we are today.

Who do you want to be in 99 days? What would you add to my list?

If you’re looking for things to spur your own moral imagination in this age of shortcuts, I commend to you Sharon Miller’s excellent post. 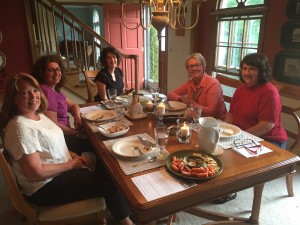