The Spring Equinox is important to the plant magician or green witch for a number of reasons.  First and foremost it is the beginning of the growing season, time to start seeds, prepare soil and plan out our gardens.  All of these practices can be ritualized, and by utilizing specific plants for their sanctifying properties we are able to provide fertile ground both physically and magically for optimum yields.  Planting seeds, awakening the life within their tiny little bodies is an act of magic in its own right.  Through germination methods we can mimic the ideal conditions necessary to awaken even the most stubborn of plant spirits.  In addition to fertilization and turning the soil, green practitioners will often lay out their flower beds in a ritual grid, often adding crystals, bones and other more permanent charms to the soil.  Ritual fumigation using the smoke of these sacred herbs may also be performed.  Offerings may be made to the spirits of the land by digging offering pits or shafts and depositing libations of milk and honey directly into the earth.  Another method is to build a ritual fire over the intended planting are to make offerings via the flames.  Allowing the fire to burn down to ash and turning the remains into the soil is beneficial for many plants, and can help to change to soil’s pH.

Certain plants have been used throughout history for their cleansing and sanctifying properties.  Many of them naturally fight disease, protect against parasites and inhibit the growth of bacteria.  Through their sympathetic magic, they raise the vibration through intention to create sacred space.  In additional to being herbs of purification, many are also healing, protective and inviting to beneficent spirits. 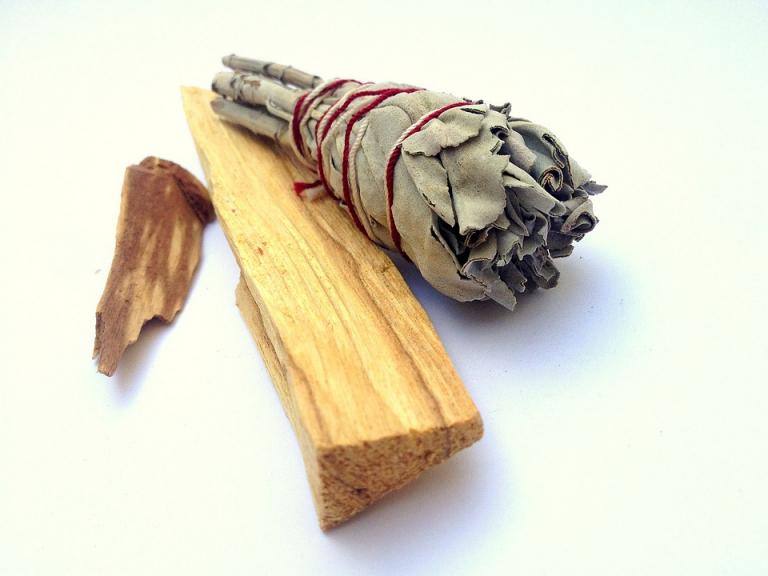 Palo Santo- Bursera graveolens: These fragrant wooden sticks are becoming just as popular in New Age circles as White Sage, and are used in much the same way.  The fragrant wood can also be hung or placed in an area to slowly release its scent and cleansing power.  In Spanish, palo santo means “holy wood.”  It is used in Central and South America where it is native to combat negative energy.  It cleanses a space, making it sacred by removing misfortune, negative thoughts and emotions, and has been used to chase away evil spirits.  Traditionally only fallen branches are harvested for use, and they must go through a curing period.  it is believed that they must sit for 4-10 years before their medicinal and magical effects are activated.  Lighting strikes, further enhance the power of the wood and are much coveted.  High demand has resulted in increased production and farming of the trees that produce Palo Santo.  They are related to Frankincense, Myrrh and Copal; part of the Burseraceae family.

Palo santo smoke is used to keep away mosquitos and other insects, and medicinally it is used for a wide range of symptoms for which it offers relief.  As a medicinal smoke it relieves symptoms of cold and flu, stress, asthma, headache, anxiety, depression, inflammation and emotional pain.

Thyme: Thymus vulgaris: Used for its protective and cleansing properties, Thyme also inhibits the growth of bacteria and fungi.  It was employed by the Romans to purify rooms.  Its name comes from the Greek word meaning, “to make a burnt offering.” 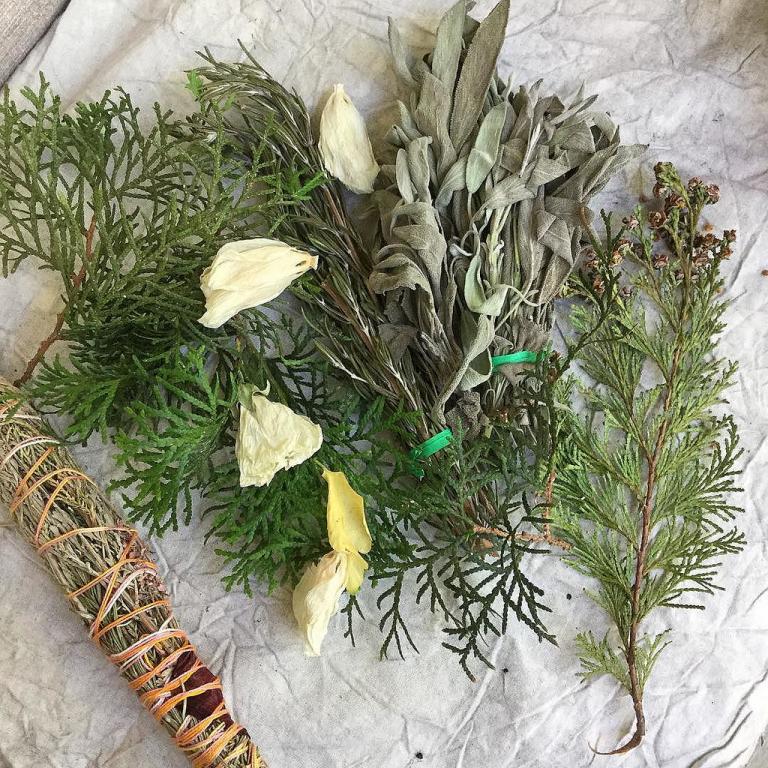 Red Cedar- Juniperus virginiana:  Cedar wood is used to make closets, chests and armoires because of its ability to repels bugs and inhibit the growth of mold.  It protects clothing, documents and other fibrous material from damage. It has been used by ancient cultures in the embalming process for its preservative capabilities.  This Solar tree is masculine in nature, and represents male divinity.  Cedar of Lebanon was highly prized in ancient times and was said to have been used in the construction of the Hanging Garden of Babylon and in Solomon’s Temple.  It is a most popular and widely used ritual incense in Mesopotamia and by Native American cultures.  The scent promotes spiritual consciousness and deepens our contact with the divine.

Juniper- Juniperus communis:  Juniper has been used throughout the Old World for protection, purification, and healing.  It was used in ancient Sumer, Babylon and Egypt to honor deities and is used throughout norther Europe in recaning rituals.  Recaning is also spelled reconning (reek-en-ing), and is the Northern European equivalent to smudging, known in Scotland and Ireland as saining.  Juniper is also a solar and fiery plant, and is associated with both male and female energies.  It is a plant of the Sun, but also of the Underworld.  It can be used medicinally to detoxify the body, like many other cleansing herbs.  Its essential oil is antiseptic and destroys parasites.  Use Juniper to purify the home and purge it of negativity.

Lavender-Lavandula spp.: Lavender is a well known herb, commonly used for its relaxing effects.  It is associated with the element of air and the planet Mercury.  It is sacred to Hermes and Hekate, and like many plants contains both light and dark virtues.  It is mostly known for its healing and calming energies, and can be burned for purification or to asperge blessed water.  The essential oil deters fleas and moths.  It is antiseptic and antibiotic, healing cuts, burns, bites etc.  It is also naturally detoxifying, and is one of the safest essential oils.  Lavender invites tranquil, soothing energy and cleans the air making it perfect for purification, especially after a long winter.

Myrtle-Myrtus communis: An herb of Venus and the Moon, Myrtle is used in rituals of love, fertility, and is used to enhance youth, bring peace and attract money.  As an herb used in cleansing it has the benefit of creating a peaceful and loving atmosphere.  It was used in ancient Roman festivals dedicated to the goddess Venus, in which women bathed in Myrtle scented baths and wore wreaths of the plant material.

Mugwort– Artemesia vulgaris:  A quintessential witching herb, Mugwort has many uses of interest to the magical practitioner.  Mugwort is used for spiritual cleansing, protection, healing and consecration.  It is associated with the Full Moon and the Summer Solstice, although it is used throughout the year.  It is one of the Nine Sacred Herbs of Germanic lore.  Smudge sticks can be made from bundles of dried Mugwort, and wands can be fashioned from large mature stalks.  It is also left as an offering on the shrine, and placed around tools used for divination.  It is quick to burn, and makes good kindling for sacred fires.  The plant infusion is traditionally used in washes for spiritual objects, amulets, psychic tools and the like.  In Northern Traditions, Mugwort is known as the plant of Midgard.  It is used in purifying magic to create a sacred space, and ensure the return of a journeying spirit to the Middle Realm. 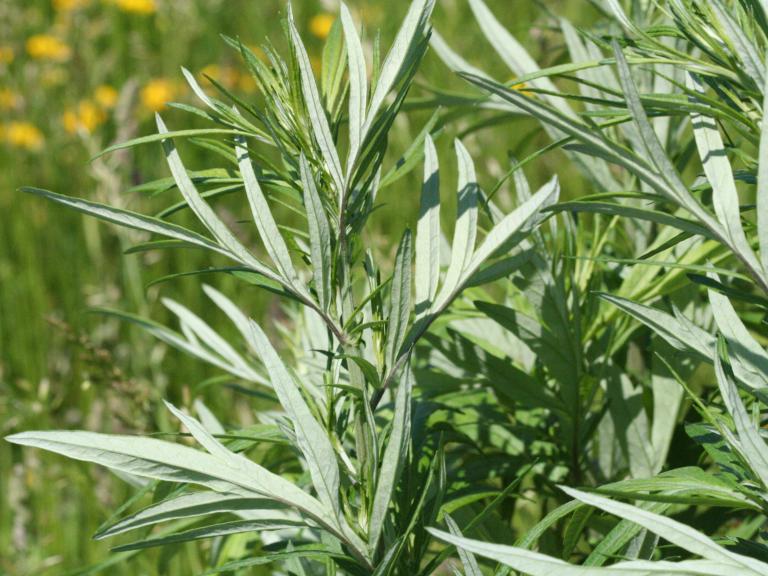 As the weather gets nicer, Springtime is our first opportunity since late fall to get outdoors and connect with the awakening spirits of the growing half of the year.  This is the perfect time to perform cleansing and rededication rituals to pursue your goals for the new seasons.  Take advantage of this time to make offerings and renew your relationship with the spirits of the land as they awaken from their wintry sleep. 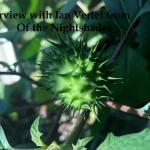 March 16, 2019
Of the Nightshades: Interview with Ian Vertel
Next Post 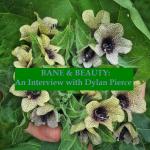 Energy For Witchcraft When Your Personal...
3 Pagans and a Cat
Related posts from Poisoner's Apothecary