Taking the Merry out of Christmas: The Offense of the Gospel

It only takes one person to be offended. If it can be shown that an offense was caused, then we have something we can really work with.

I think a lot about the giving and receiving of offense because I’ve got children, and children are perfect at locating offense, whether intended or not, and lovingly appropriating it so that it can sink down deep and grow into the tender tree of bitterness and irritation. For example, I have one child who loves to sing, and another child who hates to listen to anyone sing, ever. Both are prepared for other person to be the wrecker of their day, their week, their entire existence. There is a constant picking of one at the other, because they were born that way, made that way, and more than anything, they enjoy living that way.

Offense taking, and its sister, offense giving–and this, I really think, is why there is such an incredible proliferation of it everywhere–is a pleasure. It is enjoyable. If you can find yourself to be injured in some way, however slightly, or even better, about to be injured, well, then you can knock the other person ever so slightly back. They should do something to make you feel better. If they don’t, well, the offense increases and there you are, with an even greater measure of power in your hand. The Other has made himself, or herself, to be your enemy, and it’s not your fault.

I am always interested in the timely intersection of the day’s cultural news items. I am sure that various unrelated events must somehow be talking to each other. I, therefore, watched, in horror, over the weekend, a clip of a young Yale student screaming at a professor. The professor had not done what she believed he should have done. She was offended beyond the point of coherence. She was screaming with anger. The professor stood on his heels with a baffled look on his face as the mob formed and she raged away. And then the clip ended.

Also, over the weekend, it was determined that Christians have been offended by the absence of the words ‘Merry Christmas’ on their Starbucks holiday coffees. I watched the clip of the guy who said we should all go in and say our names are Merry Christmas so that Starbucks will be forced to write those words on the cup and we will then have scored some tiny point. He smiled merrily and encouraged people to leave comments below the clip. His chief offense, as I can tell from reading this article in Huffpo, is, and it should be predicated with ‘shut up stupid Christians’, is that he is an ordinary beefy American who is ruining the gospel, which Huffpo knows all about, shut up shut up shut up.

How curious, I thought to myself, that Huffpo believes the gathering up of offense is a Good Thing–you can see it all up and down their page–but as soon as someone who might be identified as a Christian considers it, it becomes instantaneously a Bad Thing. I am a Christian and I am not particularly offended by not having Merry Christmas on a coffee I cannot actually afford to purchase. I am one of those poor rubes who have to drink coffee at home, made by myself to my own exact specifications, through a cone, pouring in the hot water gradually, heating the milk, adding a precise amount of Lyle’s Golden Syrup, nursing it through the school day as I mediate between various warring factions of children singing and complaining about the singing. No, what really offended me was when I briefly worked at a store called The Christmas Tree Shop, and was reprimanded by the floor manager for, on Christmas Eve, when wished a Merry Christmas by a nice old lady, I responded with “And a Merry Christmas to you.” The manager called me over and said, in a whisper, “don’t say that, it might be offensive.” The irony of this moment was not lost on me. She had “Christmas Tree Shop” emblazoned on the front of her apron. I smiled a bright, cheerful smile, laughing uproariously in my heart, and promised to try to do better.

I don’t have time to be offended, because I’ve got other things to do. Also, a regulated and self disciplined mind, which should be the purview of Christians who read and meditate on the light of scripture, should be able to take an offense, both real or only perceived, and deal with it properly, through forgiveness and rational thought. The young Yale student who thinks she has been hurt because of a Halloween costume someone might have worn, has more problems than anyone in that crowd could possibly be expected to deal with. The trouble is that she is not alone. She is everywhere, measuring up the world by the plumb line of her own broken mind and everywhere finding it wanting. The emotional and spiritual pleasure of being offended will leave in her wake a culture ruined and devastated.

I think the true offense, and why Christians must, absolutely, be constantly told to Shut Up, is because it is the Christian’s job to reveal and speak about the very dire reality of humanity’s true offense. Offense is a problem, but it’s not ours to take. It is God’s to measure and judge. We offend him, every single tiny second. Our sin is a stench rising up in his nostril and sometime he will have enough and come and destroy the offender. If you haven’t flung yourself on his mercy before that you will find all your angers and minute micro aggressions have brought you to a place eternally perishing. The Christian’s job isn’t to take offense, it is to announce the offense of the sinner and plead with the sinner to repent. Starbucks has a lovely, carefully crafted little pagan deity on its cheerful red cup, a cup that pours out coffee to a humanity spiraling into the depths of depravity and sin. That young lady, screaming her rage, later cupping her warm coffee and scrolling down her expensive handheld device, is a sinner in need of mercy from God. She is the offender, not the offended.

Christians do have a purpose in this dark time, but it’s not spread a message of peace and love. Not initially. It’s to say to the person who is gathering their threads of offense and weaving then into a warm, cozy blanket of offense, “Stop It.” And that is the best, most sure way to offend everyone that I can think of. 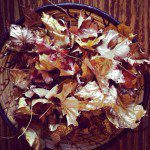 November 11, 2015 Rain and Chicken and Dumplings
Recent Comments
0 | Leave a Comment
"Do you take dish soap with you? Or just rely on the boiling water to ..."
LucyL Some Reasons To Go Camping
"This is brilliant. The fam has been watching the re-make, but I have avoided it ..."
LucyL Of Pies and Men
"The depraved don't know that they are depraved."
Charlie Sutton Don’t Lose Heart
"I'm sorry to hear that (ie 2.) I do hope if you get to enjoy ..."
LucyL 7 Takes In All Directions
Browse Our Archives
Related posts from Preventing Grace