My favorite airport in the world is the Brussels Airport. In the shadowy distant past of my childhood, that airport was the gateway to many particular kinds of bliss–the stark, brisk rush of cold air, so different from the heavy bright humidity of Abidjan and the fierce dry heat of Bamako. You climb out of the plane and the world outside is all concrete and stone, petrol fumes, elegance, and frites avec mayonnaise. You gather your luggage and your exhaustion and make pilgrimages to the place of the waffle, the chocolate shop, the moules frites, Grand-Place, and, the very reason for going there, the grandparents. Going to Belgium meant being with them, for a few days, or maybe a whole week.

The curious thing about Europe in general, and Brussels in particular, was how seriously they took airport security in those far off days. Whereas in Bamako, when you were trying to board a plane, they would shove your luggage through a prehistoric scanner and hope for the best, if you were flying to Europe, you would certainly be stopped on the Tarmac so that the flight attendants could personally and meticulously examine everything you had, before you got on board. While America was still under the illusion that anybody could just walk up to the gate and say hello or goodbye, in Belgium, I would be descending the long escalator, waving desperately and crying, miles before any of the real airport began to appear.

So it seems, the centers of all my formative mental furniture have been bashed and assaulted by ISIS and its tentacled arms–Bamako, Grand Bassam, Paris, Brussels. If I was more of a narcissist, I would think they are out to get me.

Except that they don’t really care who they get, they just want death and destruction everywhere. They want violence and chaos. They are Lamech, boasting about killing a child over a trifle, calling for their wives to sing a song for their glory.

But this is Holy Week. And the chaos of human sin is what’s on the menu.

The trouble with Jesus, of course, is that we are all against him. The only moment in human history where we’ve had true and perfect unity was when we all agreed that Jesus should die. There wasn’t any question. There wasn’t any debating and arguing about what to do. It made the most sense to everyone there. Since then, as before, who should die is up for debate. Each believe strongly it should be the other person. Not me. Somebody else. Imagine the relief of there being perfect agreement about the corruption of this single man.

Except that he wasn’t corrupt, didn’t deserve to die, wasn’t in the wrong, didn’t ‘have it coming’. He was the only one of us who didn’t deserve it. The only one who could bring any kind of order and peace in the face of so much bloodshed.

We have deluded ourselves, in the west, for a while now. It probably makes sense that somewhere like Bamako–dusty and chaotic–would be assaulted and bombed. But Paris? Brussels? The many miles of smooth, gracious architecture, the politesse and grace of the person handing you a big paper cone of French Fries. We thought we were good. We thought our calm quiet speech would calm and quiet the world.

And it hasn’t. Turns out we are not immune to evil. That chaos is happy to go anywhere and disturb everyone. And we flap around for who to blame and what to do. But meanwhile, the cross of Jesus has been abandoned, a relic in those glorious temples of forgotten belief.

And what of America? Turns out our shining beacon of democracy is not interesting to radical Islam. Nobody wants to know how well we have organized ourselves. We are so well organized that we kill our young willingly, without the unpleasantness of coercion. Honestly, I don’t know why ISIS would bother to destroy us, when we are so busy doing it ourselves.

No, we wanted–all of us, the whole world–to achieve a gracious peace without God, but it can’t be done. We have to go back to the single good person in human history who could bear the weight of so much injustice, ugliness, violence, bloodshed, and rebellion. We have to back there and admit that we should have been the ones to die, but he died so that we wouldn’t have to. There is no other solution than this. There is no other Hope, no other prayer, no other peace. We need to be saved. And we need a real Savior to do it. 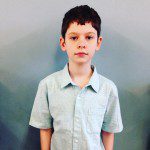 March 21, 2016
Do Not Hinder Him: Bringing the Child to Sunday School
Next Post

March 23, 2016 He Had One Job: Jesus, Terrorism, and Holy Week
Recent Comments
0 | Leave a Comment
Browse Our Archives
get the latest updates from
Preventing Grace
and the Patheos
Evangelical
Channel
POPULAR AT PATHEOS Evangelical
1