Because Of Course: The Transgender Jesus

Because Of Course: The Transgender Jesus May 19, 2016 Anne Kennedy

I was going to rail on about packing and laundry, because that could be funny, right? I mean, it’s not that funny. It’s more just So Much Work, especially since I haven’t started the packing part. Took me a whole day to catch up the laundry. LOL. (That’s an ironic LOL, just to clarify.)

Luckily, you’re saved from that because Huffpo came up with the amazing notion that Jesus, of course, is transgender. As I commented on Facebook, to quote myself, “Snerk.” Of course he is, what could be more obvious.

The writer of the piece self identifies as a Christian, and reasons it all the way out, sort of, and makes some amazing claims about the DNA of Jesus and Mary, which I guess she knows about by faith, or something. Funnily enough, we don’t have Jesus’ dead bones to DNA test, so we’ll just have to take her word for it.

Matt was all confused by the article. “I thought Jesus was married to Mary Magdalene, and was gay,” he said, “how can he be transgender?” Oh Matt, dear sweet Matt, How Could He Not Be. He has to be. Jesus is the receptacle into which self identifying Christians everywhere pour all their micro-aggressive hopes and dreams. Being Trans is where it is. It’s the thing. And Jesus, of course, gets on board with whatever most concerns us in the moment. He’s like that. He’s a nice guy. He is love and stuff. When it’s time to be gay, he’s gay, when it’s time to be Trans, he is more Trans than all the rest of humanity put together. If Jesus doesn’t absorb and bless our personal feelings and “convictions” of what use can he possibly be?

I mean, that’s why I self identify as a Christian. Jesus is my personal avatar and he gives me everything I want. He doesn’t so much lead and guide me, as scuttle along behind me like that woman in that picture carrying a big stack of hay on her back, while the man slouches down the road two steps ahead, smoking a cigarette. A compliant, servile Jesus, that’s when he’s at his best. Sometimes I might lean back and ask him how’s he’s doing and if I can “serve” him in any way, by buying local and offering to teach Sex Ed to the benighted and backward Sunday School. But we all know he’s there for me–affirming me, thinking about me, conforming 2000 years of Christian thinking to me. It’s the best kind of relationship.

I don’t want to be judgmental or anything (cough) but this tender-hearted self-identifying Huffpo Christian might want to take a glance at the holy bible. I mean, she does quote it and stuff, and she knows some things about Mary and Eve and Adam and Jesus. But it’s possible she’s grabbed on to the wrong end of whichever part of it she’s reading. See, the bible’s not about us. It is about Jesus. And Jesus isn’t the spiritual avatar of the age. He is God. And as God, he gets to say what kind of person he is, and what kind of people we are.

Honestly, letting Jesus be God, and not forcing him into our terribly unoriginal cultural foolishness, is a lot more interesting, and more dangerous, and potentially more beautiful. Except that beauty itself has been redefined.

That’s the part that is so tragic. Men and Women are different, and made by God. And they look different. And they reflect something about God, especially when they are joined together in marriage. A woman being entirely who she is, acting and speaking and dressing as if she is female, that’s so lovely, and occasionally glorious. And a man, being himself, that can be quite attractive.

But a woman trying to look and act like a man, and a man trying to look like and ape a woman, that’s not quite so lovely. I understand that by saying this I am committing a grave offense. We are supposed to pretend that a man putting on a dress, or a woman stereotyping her idea of masculinity and putting it on to try to make it her own is both charming and lovely to look at. But it’s actually tragic. It is a diminishment of both.

You know, we could look at Jesus to try to understand sexual differences, gender perhaps. We could look at him there, dying to rescue a bride. He did put on human flesh, he did cross over to be human. But he didn’t do it ironically, or mockingly, or cravenly. His humanity was perfect, worn perfectly, and integrated perfectly. He wasn’t trying to be somebody he wasn’t.

And we, I suppose, then, could be considered “trans”. We are supposed to change. But not from being one kind of person to another kind of person. We are to become like him, like his perfection, and more completely ourselves. The closer you come to Jesus, the more who you are as a particular person comes into focus, uncluttered and unburdened by so much foolish hiding and pretending–the sin and lies are gradually and painfully stripped away.

You know what’s beautiful? This song, sung by two women and a man. If you’re amazed and worried about the great confusion that has fallen over so many, you could pray the words that Jesus gave us to pray–that God would be worshipped, hallowed, adored, that we would forgive and be forgiven, that all creation would come under his sway.

That image, that woman laboring up the hill with her incredible burden behind the man who doesn’t do anything–that is a true image of us. We are staggering under an incredible illusory burden of our goodness, of our cleverness. But Jesus, the man, the bridegroom, doesn’t slouch down the road flicking his cigarette ash onto the path. He comes and takes that burden, and flings it away, farther than the east is from the west. 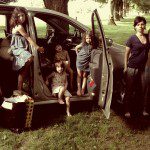 May 20, 2016 7 Quick Tips for Traveling With Children
Recent Comments
0 | Leave a Comment
Browse Our Archives
get the latest updates from
Preventing Grace
and the Patheos
Evangelical
Channel
POPULAR AT PATHEOS Evangelical
1