Mary and Jesus and Me 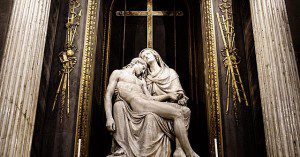 I am feeling some sort of obligation to write something about Mary today. It’s nearly Christmas after all, and that means that every single secularist is rubbing gleeful hands and preparing to bellow “There’s No Way She Was Really A Virgin.” And then there was that uber depressing piece by a devastated rape victim who decided to find solace in the fact that God raped Mary, so at least they have that in common. I actually stopped reading half way through because it was so depressing.

And really, the depression extends far deeper than just the ubiquitous denial of the power of God. That we get every high holy day. I would feel almost disappointed if there was no loud screech of anger. No, the greater sorrow is that even Christians, like me, in seasons like this (just days before the celebration of the nativity of our Lord) should be unable to properly focus and consider the radical nature of God’s character and action in the world. Mary is in the frame, certainly, but it is God and his extraordinary power that requires my attention, otherwise I can’t even properly understand her.

And I do want to understand her, now more than ever, because she stands at the center of human history, with her unusual child, and I stand afar off in a time and place where no one knows anything about themselves any more. From my vantage point, not only is ordinary identity confused, but sex and gender as well. The purpose of a human being, the worth and dignity of a person is entirely up for grabs. I can try to make a case that it’s worth it to be a human, and worth it to be a woman, but there is a cacophonous argument against any claim I might make. And often I am on shaky ground because I am unsure about the place I inhabit in my own sphere, let alone in human history. Is it ok that I bear children? Should I work quietly at home, or in the public square, or both? What should I do? Who should I be?

It might have been that Mary was pondering some of these things in her heart but we don’t know because we aren’t told. Her state of mind in the days leading up to the Annunciation are not vouchsafed to us. We only know that when she got the news she was troubled, because, how could she not be. We also know that she didn’t ask for time to pray about it, to brood and consider, to check her privilege or her feelings. She looked reality straight in the face and said Yes. That alone is extraordinary.

But really, the astounding part is that God was finally going to do something. One possible Psalm for today is Psalm 80, which repeats several times the line, “Restore us O Lord God of Hosts, show us the light of your countenance and we shall be saved.” As shocking, truly, as it was of Mary to say yes without coming apart at the seams, is the fact that for hundreds of years prior any small group of people were praying and asking for salvation. Some small beleaguered believers in Israel were always able to see how bad things were turning out, how far they had fallen from God’s countenance, how little they could do to make anything better. And so, in Psalm after Psalm and text after text, they beg.

The way I do really. I stand in a hot shower and beg God for stuff. Like a humiliated beggar by the side of the road covered in sores. Many days I am not the least bit coherent. I mutter the names of people and troubles. I forget all of my promises to pray for others. I stand there in blind helplessness. And then I remember that I am wickedly wasting water and get out and stumble through my day. There is no strength, no wisdom emanating from my essential person. And yet, day after day, moment after moment, God restores my fortunes, he puts one of my feet in front of the other over and over.

And, not to be trite, nor treacly sweet, Mary has often been a help to me as I’ve tried to understand her curious and peculiar Son. The totality of her yes is such a surprise. The long years of shame culminating in complete heartbreak frames the weakness of human existence juxtaposed against the power of the cross. She is Job and Hagar and Sarah and Esther and Ruth and Naomi and Eve. She is the mother of Ichabod, the mother of the dead child in I Kings. She is a woman whose body brought life into the world. And, like all of us, a life that was constantly overshadowed by death. Death loomed at every corner. And she, like us, had to trust her creator, her savior, her God to rescue her from the power of Herod and her neighbors and the world.

Show us the light of your countenance and we shall be saved. It’s so simple. It’s so impossible. That if God will just look at us, will just consider our afflictions, our death, our sin, we can be saved. And he did. He looked at us, and more so he came, rescuing us out of many waters, out of many troubles, out of the years destroyed by the locusts. He filled our mouths with laughter and our tongues with shouts of joy.

And he did it, really, in the way foreshadowed by Mary. He absorbed it all in his body. His bloodied and destroyed body gave life to the world. We say it all the time, or at least I do, but I still have a hard time looking at it on its face, or rather, considering the countenance of one so marred, so battered, so destroyed by my sin. His countenance, my fortunes. His life for mine. So that death, always lurking around the corner, can’t any longer do any more than taunt. Death has become like Nat Geo and the History Channel at Christmas and Easter–angry, screeching, impotent.

Whereas I, I am settled and content that God did not forget his promises, did not lose track of his people, did not change his mind. And now I will get up with all the haste of Mary rushing off to her cousin Elizabeth, and go to church because there’s so much to talk over and consider about this great thing that God has done. 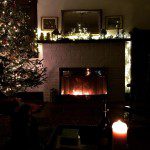 December 17, 2016
Notes from Home: Parenting and Reading
Next Post 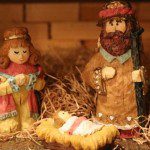 December 19, 2016 It's All About Me: Podcast and Links
Recent Comments
0 | Leave a Comment
""The open disdain that groups of people have for each other, the loud cries of ..."
Lynda Wilson Who Brings Princes To Nothing
"This is so good. Thank you."
Lifelong Learner I Know It’s Disappointing, But You ..."
"i'm reading Ann Coulter's Demonic... the section on the French Revolution is absolutely terrifying."
LucyL 7 Very Quick Takes
"You should blog more about your noise allergy. I think I have one too. Is ..."
LucyL Nothing to Blog About
Browse Our Archives
get the latest from
Preventing Grace
Sign up for our newsletter
POPULAR AT PATHEOS Evangelical
1