At Such A Time As This 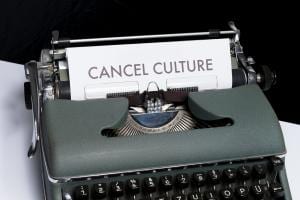 All my open tabs this morning are about Bari Weiss, Nick Canon, and Cancel Culture. I’ve tried to avoid clicking on anything in the NYT (I’m almost out of my free articles) as a matter of principle, but I keep getting sucked in anyway. This line from Ross Douthat strikes me as the one I’ve been searching around for:

The right and the left both cancel; it’s just that today’s right is too weak to do it effectively.

Douthat exposits this point with something or other about the Dixie Chicks and 911. I’m not particularly interested in whatever it is about journalism he is going on about. Rather, what strikes me as fascinating this morning is the question of power in general, particularly the subverted intoxicating victim status as power.

This has been coming down the wide rambling road of American culture for a while. Rather than the old and tired Hard Work and Working Your Way Up From Nothing, the angsty cries of boomers and even forgotten GenXers about the snowflakey youths—the millennials and all those who tumble after them—have not been enough to arrest the changing currents of cultural norms. The best way to be someone now is to have suffered deeply and tragically in any number of ways. Not suffering or being too materially comfortable is a liability. And so there is a rush to document and prove through the socials all the way in which one has been misused by “society,” by others, by the universe, by whole groups of people, and most of all by the Bible.

All this has been swirling around in my head as Matt has worked through a Bible Study on Esther on Thursday nights. We are at the critical moment in the narrative where Esther is about the reveal her own identity and save her people. I hadn’t noticed how my own perceptions and expectations of women—as a whole class of people—have shifted and changed over the years.

It was only a few years ago that I was busy not reading that Bad Girls of the Bible book. Feminism meant that women had power and should be able to use it. No one wanted to be “weak.” If I thought about Esther at all, it was that she outsmarted Haman and all the spiritual forces of wickedness at his back. And yet, when I lately read the book, of course, it was the temporal forces of power swirling around her that came to the fore. I imagined that she had joined in the competition to be the new queen mostly against her will, because Mordecai or someone else made her. She could only be helpless. She must be pure and innocent. All women are. As she was gradually elevated in the harem, it was all God and certainly had nothing to do with her own wits or desires.

My own reading of Esther, in other words, flattened over the years. The complex picture of a woman dealing with men and circumstances much greater than herself, with her own ambition, with the wealth and status conferred to her when she “won,” all that went away in the smooth, emotionally effortless victim trope of our time. Indeed, I was initially offended by the idea that she might have wanted to win, that she might have done anything other than save her own people on purpose. The victim cult is so comfortable, like a well-broken in shoe. It’s a little bit dangerous to consider anything else. Read the rest here!

July 16, 2020 That's Not Helpful
Recent Comments
0 | Leave a Comment
Browse Our Archives
get the latest from
Preventing Grace
Sign up for our newsletter
POPULAR AT PATHEOS Evangelical
1