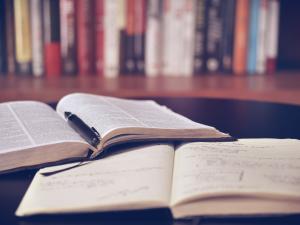 Well, I have still so so much to do, including cleaning my house and trying to figure out where to put three bookshelves worth of books that have been shoved into the hallway because the experiment of the two oldest girls trying to share a room has mercifully come to an end. Nature, as it were, is healing. And yet I have got now to figure out where to put all the stuff rejected by both girls. And one thing I have a hard time doing, which actually proves my overall virtuous piety, is getting rid of books. So maybe I should go into business, because the phenomenon of people just buying a lot of books and shoving them on their shelves so that they look smarter than they are hasn’t gone away since it was first reported, but is still very much a thing. Not gonna lie, I did watch the 16-minute video that apparently reignited the Twitter firestorm. And you know what, it’s a beautiful house, and that person clearly has a lot of more interesting things to do than read any books. Things like manifesting her house in the first place, and getting ready for the birth of her baby Jupiter, and watching a lot of movies about dinosaurs, and remodeling other people’s kitchens. She, like me, is very busy, and that is why she doesn’t read. It is also why I don’t read in weeks like this. Whenever I might think about doing it, I remember fifty other things that have to be done right then.

But still, I’m not getting rid of any books, not even to rich people who will take care of them, at least, most especially by never reading them. They are mainly all the books of the children’s childhood, the ones that made it out without becoming battered and torn. They are hardily used, necessary for future generations, and therefore have to go somewhere in this house and not some other one.

But still, it is Wednesday in Holy Week, and there are a thousand other tasks to consider, not least of all that tonight is the first service of the week, the one where we light all the candles and then put them out one by one as the scriptures are read. Not the whole scriptures, of course, but the body of Psalms that most peculiarly relate to the suffering and death of Jesus–his passion, his time of trial, the hour when he took up all of the sins of the world onto his shoulders and brought them to the grave of his own death. All of these things are recorded in a book that we can all variously read at any moment it suits us. This evening, they are read aloud and the candles go out, the light diminishing until there is a loud crash and only one flame is brought back in and left and the congregation departs in silence. It is my favorite service of the year.

So different from the bright, light, cheerful happy space of the person in that video, of Adele and Gwenyth, of all the people of the world who don’t even have a category of sin. The only hint of sadness appears in the word “anxiety” and the whole host of trouble the world endured under the other category of “lockdown.” But we don’t have to speak about it now, it is long past. Except in China, and in some other places I guess. For me, though, and for Christians who know that Jesus is both the Light and the Word, there is an irrepressible joy in watching the lights go out and out and out, to hear the sorrow fall off the page, to find all the trouble gathering itself up in one person who can handle it, and know that in a few minutes that single flame will come back, that nothing can ever put it out–no stupid foolish wreckage of human idiocy can ever put it out. That God knows all and yet is merciful to us mere creatures.

Hope to see you in church!

April 14, 2022 Thursday in Holy Week
Recent Comments
0 | Leave a Comment
"The depraved don't know that they are depraved."
Charlie Sutton Don’t Lose Heart
"I'm sorry to hear that (ie 2.) I do hope if you get to enjoy ..."
LucyL 7 Takes In All Directions
"I want any song I sing in the worship of God to make grammatical and ..."
Charlie Sutton That’s Not How Any Of This ..."
"I'd never heard of Norm McDonald and I'm glad you've introduced me to him. I ..."
Summers-lad Death on a Wednesday: John Shelby ..."
Browse Our Archives
Related posts from Preventing Grace