Get updates from Project Awaken delivered straight to your inbox

A Spiritual Revolution: 6,000 Turn Out To Hear Eckhart Tolle & Deepak Chopra In L.A. 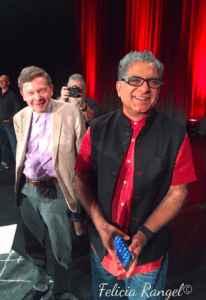 beginning to crest, breaking the world into a new level of consciousness and awakening. In every tradition- Christian, Buddhist, Agnostic- a reformation and revival is breaking forth, which for so many religious institutions looks like death and for so many nomadic religious guru’s brings life.

The spiritually interested among us, which seems to actually be the majority of the population, have found ourselves attracted to a new kind of spiritual teacher, one that doesn’t represent a singular brand or tradition, but embodies a truly integral approach that combines the best of all spiritual wisdom along with science, philosophy, sociology, and every other field of study, to create a holistic worldview and way of being.

Leading the way for this interspiritual revolution are two spiritual gurus who have garnered international popularity for their integral yet practical teachings and truly down to earth approach. On Saturday night on the campus of the University of Southern California, Deepak Chopra and Eckhart Tolle took the stage for a two and a half hour historic event where they taught on the basic premise of the spiritual revolution- awakening to expanded consciousness.

The Shrine Auditorium was packed with over 6,000 people who made their way through the Oscar-eve traffic of downtown L.A. to get their chance to hear these spiritual giants in conversation. Among the star studded audience were the likes of actor Jim Carrey who has been outspoken about his affection for and the impact of Eckhart Tolle’s teachings in his life. Both Eckhart and Deepak both took a half an hour to explain their summary of what it meant to “awaken to higher consciousness” and then spent an hour in dialogue with one another about some common questions that occur on the journey to awakening.

What is the appeal of these two men’s messages that could bring over 6,000 people including some of the biggest celebrities in Hollywood together on a Saturday night? It’s simple. “There are no nouns in the universe, only verbs. Everything is energy, nothing is real“, said Chopra in his opening remarks. Summarizing enlightenment, he said, “Be aware. This is the key to waking up.” Similarly, Tolle remarked, “Consciousness is where experience occurs. I am consciousness. Simply knowing that and slipping into the self beyond the self in this present moment is awakening.”

Both men’s messages are rooted in Christian, Buddhist, Hindu, and various other religious philosophies, who, at their mystical level, all seem to teach a message of interconnectivity and mindfulness, which is the core message of the spiritual revolution. The appeal of Chopra and Tolle is found in both men’s immense knowledge of and experience with spiritual awakening and yet a real lack of frills and glam to obscure the clear path towards finding meaning and fulfillment in life. This is what draws millions of people around to world to buy their books, attend their lectures, and join their programs.

As I sat in the audience of thousands, surrounded by celebrities and “normal folks” like myself, watching heads nod and jaws drop, seeing individuals taking frantic notes and others with their eyes glued to the stage, I realized that we as people are truly, desperately hungry for meaning and purpose, and we have entered an era where systems and structures no longer benefit us. We desire a much rawer spirituality, that is true to life, to science, to reason, and to our experience. A spirituality that removes the glitz and glamour and call us to the truth that we all already intuitively know deep within our souls.

And I realized that there was nothing all that special after all about Deepak or Eckhart, other than that they had the foresight to see this revolution coming and that they did the work to make the truth that religion so often abstracts and obscures and packaged it clearly, neatly, and accessibly. Their message isn’t new. It’s not unique. As the writer of the Book of Ecclesiastes said, “there is nothing new under the sun.” Nonetheless, these two gurus have proven themselves to be true gifts to the world, helping to boil down the deepest spiritual truths and making them accessible to every corner of the earth.

As I was leaving the Shrine Auditorium, I noticed the joy on peoples faces. The air felt lighter. We all had a palpable sense of determination and passion that seemed to say “We can really do this.” And it is the ability to make millions of people truly believe that spirituality and abundant life is accessible to them, right here, right now, that has made these gurus so influential and is at the very heart of this global spiritual awakening.

A little known fact about farting...
Spirituality Itself
Related posts from Project Awaken 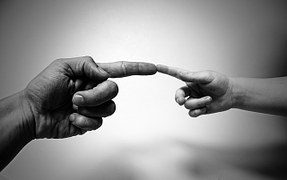 New Visions
You Are A Child of God
Project Awaken 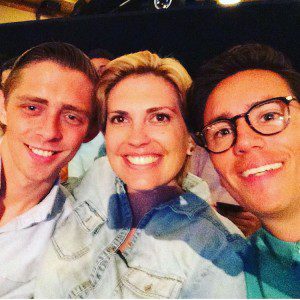