RIP Robin Williams: “I Only Knew That You Were Thirsty”

RIP Robin Williams: “I Only Knew That You Were Thirsty” August 14, 2014 Sr. Theresa Aletheia Noble

As most of you probably know, Robin Williams passed away this week in what is an apparent suicide. One of the sisters I live with came and told all of us the sad news. We paused and prayed, “Eternal rest grant unto him O Lord and let the perpetual light shine upon him, may he rest in peace.”

In the moment Robin Williams chose death over life he must have been standing over a yawning abyss of despair that he did not feel he could cross. Mental illness and addiction are mysteries few of us can comprehend so we often lack clarity in these tragic situations. I do not try to pretend I can understand the decision or the degree of culpability, if any, that another person has when they choose to take their own life. I leave that to God’s unfathomable mercy.

A story that Robin Williams’ character Parry tells in the beautiful movie, The Fisher King, seems to be an appropriate reflection for this tragic situation. It tells the story of us all, of the wounds of life and the healing power of grace that is available to every person up until the very last moment of their life.

It begins with the king as a boy, having to spend the night alone in the forest to prove his courage so he can become king. Now while he is spending the night alone he’s visited by a sacred vision. Out of the fire appears the Holy Grail, symbol of God’s divine grace. And a voice said to the boy, “You shall be keeper of the grail so that it may heal the hearts of men.” But the boy was blinded by greater visions of a life filled with power and glory and beauty. And in this state of radical amazement he felt for a brief moment not like a boy, but invincible, like God, so he reached into the fire to take the grail, and the grail vanished, leaving him with his hand in the fire to be terribly wounded. Now as this boy grew older, his wound grew deeper. Until one day, life for him lost its reason. He had no faith in any man, not even himself. He couldn’t love or feel loved. He was sick with experience. He began to die. One day a fool wandered into the castle and found the king alone. And being a fool, he was simple minded, he didn’t see a king. He only saw a man alone and in pain. And he asked the king, “What ails you friend?” The king replied, “I’m thirsty. I need some water to cool my throat”. So the fool took a cup from beside his bed, filled it with water and handed it to the king. As the king began to drink, he realized his wound was healed. He looked in his hands and there was the holy grail, that which he sought all of his life. And he turned to the fool and said with amazement, “How can you find that which my brightest and bravest could not?” And the fool replied, “I don’t know. I only knew that you were thirsty.” It’s very beautiful, isn’t it?

Rest in peace Robin Williams, we pray that the God of love welcomes you into eternity.

(Can we all pause and pray an Our Father for this beautiful man’s soul?)

Amen.I will leave you with the beautiful tribute that Jimmy Fallon made to Robin Williams which includes a clip of Robin Williams’ first appearance on the Tonight Show with Johnny Carson. It’s not to be missed.

August 2, 2014
5 Tips for Parishes from Pope Francis
Next Post 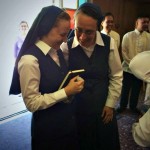 September 9, 2014 Profession of Vows: Wildflower in the Pages of an Ancient Book
Recent Comments
0 | Leave a Comment
"Jeanne d’Arc, Albert Lynch (1851-1912) , does anyone know who is the person that posed ..."
artisamazing 10 Most Gorgeous Paintings of Joan ..."
"My heart breaks for the Christians (and other minorities) in hte middle east. They will ..."
Manny NEW Syrian Archbishop’s Letter: Will We ..."
"This movie was painful to watch for more reasons than I'll enumerate here. Others like ..."
KH Sr. Helena Burns Reviews: War Room
"Anything's possible."
Truth Seeker What Are the Gifts of the ..."
Browse Our Archives
get the latest from
Catholic
Sign up for our newsletter
POPULAR AT PATHEOS Catholic
1