Today we celebrate the very first feast of St. Teresa of Kolkata, exactly one day after her canonization.

In some of her houses for the dying, for example, there was no running water and people defecated in buckets with no privacy. There was no medication other than aspirin for people in pain. Most disturbingly for me, hypodermic needles were sometimes reused — potentially contributing to the spread of disease.

How could the Church hold up someone who oversees this and call her a model of charity?

Then I remembered “George.”

How I Attempted to Defraud the Government

I don’t recall how I was put in touch with George, but I was told he needed help getting a check cashed. He was about 40 and mildly mentally ill. (I later found out he lived with his sister, who was in much worse shape.)

George told me his mother had always taken care of him and his sister. Mom had recently died and he had her final Social Security check. They were broke and had no real idea of what to do next. He just wanted someone to cash the check so they could pay rent.

No bank would honor the check because it was made out to the mother and George didn’t have her death certificate. We drove around to three or four check cashing places to see if anyone would either cash the check or loan against it. No luck. There wasn’t much else I could do for George so I took him back to his apartment.

When I got back home I told my accountant wife what had happened. Her response: “I’m glad no one would cash that check for you. If they had, you would have committed Social Security fraud.”

Several weeks later, we took some groceries to George and his sister. I briefly walked into their apartment. There was no electricity, no water, no air conditioning in a 100-degree July. They had no furniture. They had no way of cooking the pasta or refrigerating the milk.

His sister was sitting on a blanket in the living room. She looked at me like I was from Mars.
At that moment, if I could have, I would have committed Social Security fraud for George and his sister and slept great at night.

A Death in the Family

My grandmother died in a Catholic hospital in my hometown just before Christmas 2005. I had been away at college and got home a couple of days before she passed.

One of the first things my dad said to me has always stayed with me: “This hospital is a disgrace to the Catholic name.”

The hospital hadn’t done anything heretical. The nurses and doctors were perfectly competent. What upset my dad was the impersonal and almost dismissive way my grandmother was treated.

Doctors made their rounds and didn’t remember anything that wasn’t already on the chart. Nurses were with us more frequently but legally weren’t allowed to tell us much, even if they knew.

Dad had a sense that a Catholic hospital should treat people like people. Instead he felt like we were numbers.

Rules Are Meant to Be Broken?

In a sense, it was unfair for my dad to expect anything other than that. People die in hospitals every day; medical professionals have to detach themselves. There are rules and procedures for good reasons; nurses have to abide by them.

But those good and necessary rules kept my family guessing and second guessing in a setting where we most needed guidance.

At the same time, I don’t want to live in a world where a mentally ill man can walk into a payday loan and cash a check made out to his mom.

But those good and necessary rules meant George and his sister fell through the cracks of the system.
Institutions — whether the federal government or the Catholic Church — are bound by rules because they deal with large numbers. They need principles that work for most people most of the time. Otherwise things become unmanageable quickly.

But Christ does not (only) deal with large numbers. He came not only to save humanity but also to save each individual man, woman, and child.

We not only need money for rent or competent medical care; we need love. We need someone to sit in the dark with us.

St. Teresa was not a doctor or a nurse or a social worker, and she never pretended to be. She went where, at the time, doctors and nurses and social workers would not go.

She can certainly be faulted for “doctoring” badly — very badly as it turns out. But she also did what institutions by their nature cannot do.

She literally picked people up off the street and sat in the dark with them. She told them their suffering had meaning. She told people they were valuable just as they are.

The world needs this message every bit as much as it needs hospitals, government programs, and social movements.
It is the same message as the Gospel: The kingdom of God in within you.

Charles D. Beard and his wife Brielle are members of the St. Zita Catholic Worker Community of Green Country in Oklahoma. They have three children: Mychael (14), Benjamin (almost 12), and Tobias (2). Charles is a fifth generation Okie — which he is weirdly proud of — and has begun studies to become a permanent deacon — which Brielle is weirdly proud

September 16, 2016 NEW Syrian Archbishop's Letter: Will We Become the Guardians of Rocks, Pebbles, and Stones?
Browse Our Archives
Related posts from Pursued by Truth 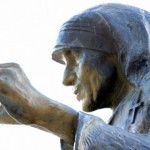 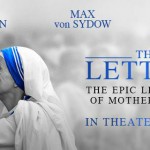 Catholic
Should You See "The Letters" Movie About Mother...
Pursued by Truth