Recently, Pope Francis gave an interview on a plane ride from Sri Lanka to the Philippines.

Here is what he said (please follow link for whole context):

[I]f Dr. Gasbarri (the papal trip organizer who was standing beside him), a good friend, says a bad word against my mother, then a punch awaits him. … One cannot provoke, one cannot insult other people’s faith, one cannot make fun of faith. Pope Benedict … spoke of this post-positivist mentality, of post-positivist metaphysics, that led to the belief that in the end religions, religious expressions, are a kind of subculture, which are tolerated but are of little value, are not on the Enlightenment culture. And this is part of the heritage of the Enlightenment. And so many people who speak badly about other religions, or religions [in general], they make fun of, let’s say toy with [make into toys] other people’s religions, these people provoke and there can occur what would happen to Dr. Gasbarri if he said something against my mother. That is, there is a limit.

It was hard for me to read these words. It was difficult because I knew the reaction they would receive. I also felt disagreement, even anger at the notion that we should limit freedom of expression.

But as I gave it some thought, I began to find reasons why Pope Francis’ sentiments, while perhaps not communicated as some might hope, are not incorrect.

1. Pope Francis is a Spiritual Leader, Not a Politician: It is clear to me, but not to everyone apparently, that Pope Francis speaks as a spiritual leader. In this case he was not speaking as a politician or a legal expert. I do not think he was suggesting that laws should be changed to limit freedom of expression. The pope is not an enemy of free speech. In this case, Pope Francis is speaking about that which is moral, the behavior which we should consider as Christians, not that which is or should not be legal.

2. The Founder of Charlie Hebdo Agrees: I think it’s important to note that Pope Francis is not the only person criticizing the newspapers’ decision to publish such inflammatory cartoons. The founder of Charlie Hebdo recently wrote a heartfelt editorial in which he criticized the decision to continue running cartoons that inflamed emotions of Muslims (extremist and non-extremist alike). He wrote:

“What use was it to drag the team into a game of one-upmanship?”

While the founder of Charlie Hebdo argues that the newspaper should have pulled back at the threats of violence, Pope Francis is making a slightly different argument. He is not arguing that the cartoons should not have been published because they make people angry enough to kill. That would have been to let bullies win with their threats of violence. Instead, the pope is saying that the cartoons, in and of themselves, were disrespectful and therefore should not have been published. (It helps to read a bit about how many Muslims understand the mere depiction of Mohammed (let alone a satirical one) to be disrespectful).

3. The Need to Recover an “Authentic Secularization”: I am reading an excellent book published by Ignatius Press called 111 Questions on Islam. In it, Samir Khalil Samir, SJ responds to questions about Islam. In one question, Father Samir indicates that one way forward in the difficulties with extreme Islam is to work to create authentic secular societies in which Islam and other religions can coexist peacefully.

The Gospel encourages the distinction between the religious and the political sectors of life when it directs Christians to render unto Caesar that which is Caesar’s and unto God that which is God’s. For centuries the two dimensions overlapped and mutually influenced each other, but we succeeded in separating them after a long cri­sis that culminated in the formulation of the principle of secularization. However, this is often misunderstood and taken as indifference (or even hostility) toward the religious dimen­sion, as the Enlightenment thinkers wanted and as modern secularists propose. And it is precisely this misunderstanding or, better, this true degeneration that brings judgment and Muslim criticisms: “See what this separation of religion, soci­ety, and state has brought the West? …

I am more and more convinced that recovering an authen­tic secularization, which recognizes religion as a fundamen­tal dimension of the human person and society that can be freely supported (but not imposed by the state, as normally happens in the Islamic countries), would be a great contri­bution to coexistence … This is a responsibility that the West, and Christians in particular, are called to fulfill in these years of radical changes.

So what does this have to do with the words of Pope Francis? I think Pope Francis is pointing out that some secular societies have reached the point that it is acceptable, even commendable, on a general level, to mock and shock the religious sensibilities of others. In a truly authentic and tolerant secular society, while this behavior may be legal, it should not be widely accepted or condoned.

4. Pope Francis is Sympathizing with Muslims Not Terrorists: Though some might think these two groups are one in the same, they are not. It is clear that many Muslims, while condemning the violence against the newspaper, also believe the offensive cartoons should not have been published. By acknowledging that Muslims had a right to be upset by the Charlie Hebdo cartoons, Pope Francis is not saying that violent reactions are acceptable. I believe Pope Francis is simply pointing out that violence in freedom of expression begets violence. Giving offense, not just to extremist Muslims, but to many mainstream Muslims who do not believe it is right to depict Mohammed under any circumstances does violence to another’s religion.  I believe this is made clear in the context of what Pope Francis said.

Sr. Margaret Joseph Obrovac, in an insightful post on the subject, writes:

Nothing could ever justify such a massacre of human beings … Doing so was and is nothing more than a smokescreen for small egos. Still, I marvel at the magazine’s indignation … Violence begets violence, and Charlie’s journalistic bullying was in every sense violent.

5. Pope Francis is Promoting the Gospel Values: When Pope Francis refers to punching someone in defense of one’s mother, I do not think he is saying that violence is an acceptable way to work out one’s differences. This is made clear later in the interview when he responds to a question about the best way to respond to terrorist threats against his own life. His response?

The best way to respond is always with meekness — meek, to be humble. Like bread, no? Without causing aggression.

Here, I don’t think Pope Francis is promoting pure pacifism. He is not a pacifist. But he is promoting the idea that when one group behaves in an aggressive way, aggression is not the Christian way to respond, nor is it the right way to respond. The Charlie Hebdo cartoons were aggressive, in your face, meant to incite anger. Muslim extremists responded with violence. This is how the cycle of violence works.

As Christians, we are called to respond to the aggression of extremists, not with a similar aggression filled with a violence and intolerance of its own, but with the meekness of our Savior who counseled us to “offer no resistance to one who is evil. When someone strikes you on (your) right cheek, turn the other one to him as well” (Mt 5:39).

This, I think, is what Pope Francis was saying. And for those of us who are paying attention, that message is much more radical than any message about freedom of expression. 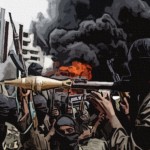 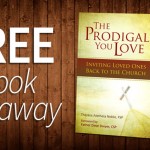 January 17, 2015 The Prodigal You Love Giveaway at BrandonVogt.com
Recent Comments
0 | Leave a Comment
"Jeanne d’Arc, Albert Lynch (1851-1912) , does anyone know who is the person that posed ..."
artisamazing 10 Most Gorgeous Paintings of Joan ..."
"My heart breaks for the Christians (and other minorities) in hte middle east. They will ..."
Manny NEW Syrian Archbishop’s Letter: Will We ..."
"This movie was painful to watch for more reasons than I'll enumerate here. Others like ..."
KH Sr. Helena Burns Reviews: War Room
"Anything's possible."
Truth Seeker What Are the Gifts of the ..."
Browse Our Archives
Related posts from Pursued by Truth