There is a saying among some of the priests at the seminary. It is “Remove the scaffolding and the man will be revealed.” The priests would say this as the men would go home for summer break and leave the rule and rigors of seminary life; the men were totally off on their own to make decisions not based on obligation or because opportunities were served up on a platter for them. No, the men would go home and make decisions based on what they had or had not integrated from their learning (or lack thereof) in the seminary.

The scaffolding of the seminary life is removed and we’d see if the man looked more like Christ the Priest… or not.

The same happens to you now. For the vast majority of your life, you have been behind scaffolding, like a building under construction, obedient—or mostly so—to the expectations and obligations given to you. These have dictated your life to this moment. Getting out of bed, to name just one of numerous examples, was grounded not only by your alarm, but also by your mom or dad or the fear of being tardy and someone noticing. Now, few will. Something as mundane as getting up is up to you.

And so Jesus prays. On the night before he died, Jesus prays to the Father: “Father, I have consecrated them in the truth…. I have protected them, guarded them… I pray for them… keep them from the Evil One… I sent them out in to the world…”

Let’s talk about that for a moment. How did senioritis go? Like crawling over a finish line. Quick poll: how many of you during the past semester at one point or another said: “I’m so done with this”? (Go ahead, raise your hand) … (*this can easily be turned into a “praise God” sign*)

As a past high school teacher, I was always a little intrigued by senioritis: What caused it? Was it simply apathy? burnout? Was it the stress of doing school and college prep? Was it because things like Flannery O’Connor’s use of irony in her short story you studied in AP American Lit just didn’t seem to bear any weight on whether or not you were getting into whatever college and major you were already accepted into?

Senioritis, I have found, is a collection of all of these… and which ultimately boil down to one thing: what motivates you? What is your intention for doing what you do? What gets you up in the morning?

But it was precisely in that moment that we all had a choice. We didn’t realize we had a choice, but we did. The choice was this: to love the subject you were studying not because you were obliged to, not because of grades, not because of impact on college, but to love it for its own sake. Senioritis is the symptom of a greater illness: namely, that we have yet to learn to love a thing selflessly—for it’s own sake.

I’m going to be honest with you, most people never learn this lesson. There are lots and lots of people in corporate America, politics, medicine, and even higher university education who do what they do not because they are or were motivated by love of the thing itself, but because they were moved there by a lifetime of decisions motivated by fear of negative consequences or other selfish reasons. When they reach their forties or fifties, they have a mid-life crisis: that’s senioritis for older people. (… did you notice? that was nervous laughter.)

They face the same question that you faced this past Spring and which you will again face this Autumn: What gets you out of bed in the morning?

The scaffolding is being removed. What will we see?

The Lord consecrated us in truth and prays for us that we might have a good reason for getting up each morning. He prays the reason might be love….

When I was in the seminary, there was a brilliant professor there who spoke very high theology and who totally blew our minds. One year, he was reassigned and his parting words of advice were:

We laughed about this. I mean, of all the things you could leave us with, you say “always make your bed”? How mundane!

I mean, yeah, I grasped the intention: it was orderly, virtuous, contributed to cleanliness, blah blah blah….

I wish I knew about this in college. Because, really, making your bed will help you with other things we often struggle with in college.

So, for example, hung-over people never make their beds. Fact.

People who do things that they shouldn’t be doing with other people in their beds don’t wake up in the morning and say “Hey, let’s make the bed together,” … because that’s weird … and what are we, married? …. And maybe we should be married before we do things in bed, ‘k?

But there is more to it than that. At some point we all realize that we’re going to die. (#SorryNotSorry). But we are. I remember hearing once that going to bed and falling asleep pre-figures death (which is why we should always make an act of contrition before going to bed—we just never know; you might not have a tomorrow!). By the same token, awaking and rising out of bed to a new day pre-figures the resurrection and the dawn of eternal life.

So, when Jesus rose from the dead, the linens in which he was wrapped were neatly folded. These neatly folded linens were proof to the apostles that Jesus had indeed risen—the proof was because linens were expensive and if Jesus had been stolen by robbers, well then the robbers would have stolen them too (and certainly not folded them!).

Making one’s bed, and I know this sounds like a stretch—but making my bed would become a reminder of heaven and of always keeping my face turned toward God in hopefulness, to keep right perspective when I got mired in the muck, to keep priorities straight, and so serve as a reminder: even the smallest virtues can conquer the largest vices—especially when the little things are done for love.

This is ultimately the challenge before you. Everything has been served to you on a platter. Your school has served you religion. Your school has served you the opportunities for making friends. Your school served you the obligations that motivated you to study. Your parents served your personal needs—from feeding you to doing your laundry to picking you up, etc, etc, etc, ad infinitum et ad nauseam. And this was done because we love you. It was done because we know that it is more blessed to give than to receive. And you have received.

You will ask yourself “is this worth it?” Is this friendship, this class, this going to Mass at 8pm on a Sunday when I have a final due tomorrow—is this worth it? And you will learn what motivates you. And that might frighten you because you might realize that the only thing that motivates you is the thing that might have motivated you your whole life so far: namely: fear… or, worse, you.

It says, “I have consecrated you in the truth” which is another way of saying that Jesus has totally given his life for you, the consecration happening by the shedding of his blood.

So too, us: we have consecrated you in everything we have given you….

It is now that you are sent. We will miss you. But you must go. Consecrate the world in love!

Go and do the same! 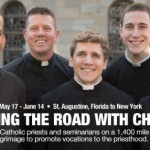 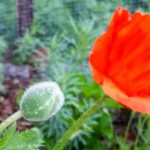 May 29, 2015 Sister Anne of the Touch of Death
Recent Comments
3 Comments | Leave a Comment
Browse Our Archives
Follow Us!