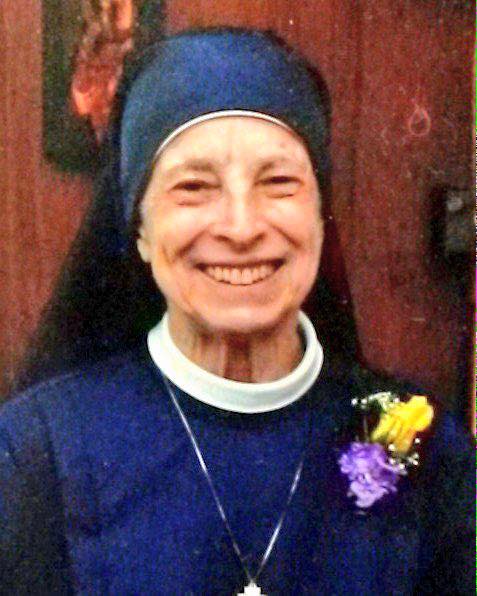 Sr. Mary Gabriella went to Pakistan as a missionary when she was a young sister. The other sisters remember seeing a picture of her riding a camel and they were all inspired.

Sr. Gabriella was known for needing very little. When she moved, she only brought a small suitcase with her. No boxes of books (practically a sin among the Daughters of St. Paul). No extra shoes. Nothing extra at all.

I first met Sr. Gabriella when I visited our convent in Boston for the first time. All of the visiting young women were gathered together for a movie. She slowly came in pushing her walker and sat down next to me.

She did not say much but her mischievous smile and the light of peace emanating from her face said enough.

Every Saturday during novitiate I cleaned the chapel with the others novices. As soon as we started banging brooms and giggling in the sacristy, the other sisters would leap from the pews like skittish does and make for the doors.

Sr. Mary Gabriella, on the other hand, seemed to purposefully schedule her prayer during our cleaning time. As soon as we started cleaning, she would methodically push her walker down the aisle and then sit peacefully as we cleaned around her. I am not sure if she did this because it was a rare opportunity to be the only one praying in chapel, or if she just enjoyed watching the novices climb all over to clean cobwebs that would inevitably crop up in the most inconvenient of places.

One day the novices were busy preparing the chapel for Advent.

The huge wreath was not cooperating with us.

(Now, this sort of thing may seem like no big deal to most normal people, but it is a huge deal to novices. Any little hiccup in the chapel is absolutely terrifying for new sisters who keenly feel the weight of responsibility for the chapel’s smooth running—the most highly scrutinized duty in the convent.)

Anyway, on this particular day, all of the novices, filled with a mixture of anxiety and glee, were trying to wrangle a wreath around a candle stand that was too large. We pushed and pulled, some of us landing on the chapel floor. Finally, we succeeded.

Sr. Mary Gabriella, her characteristically quiet self, barely said a word in response to our Abbott and Costello routine in the sanctuary, but we all surreptitiously looked for her response and could see the delight and amusement radiating from her prayerful face.

Another memory I have of Sr. Gabriella was during the time I was preparing for first vows. After community prayer with the older sisters, Sr. Gabriella had fallen and put out her hands to catch herself. Unfortunately, she broke both her wrists, a few ribs and hurt her neck in the process. She was very thin and frail as it was, so she had to spend many months in the hospital and then a rehab clinic.

I went one day to bring her the Eucharist.

As I entered the room, I was struck by how little she had with her. The room was filled with little gifts from the sisters but Sr. Gabriella did not have one personal possession with her. She did not even want her prayer books. She insisted they might get lost. That did not fool me. I knew she was preparing to meet the Lord. She had shed everything for the Lord, and now she needed very little else to keep her occupied.

I would have torn out my hair and begged for heavy sedation if I had to sit in a hospital room for hours on end with absolutely nothing to do. But Sr. Gabriella had Jesus, and there was nothing else that she needed.

That day I told Sr. Gabriella that I was having a hard time deciding whether I should take my vows. She looked slightly surprised, which was appropriate for someone who loved her vocation and could not fathom having done anything else with her life. But immediately her surprise was overshadowed with care and concern. I can’t remember what she said to me. It was so much more than words. When I left the hospital room, I knew I was leaving behind a woman with a broken body. But I also knew that Sr. Mary Gabriella had a spirit so united to Christ that she was strong beyond belief.

We love you and miss you. 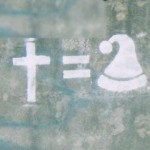 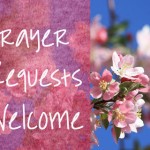 July 30, 2015 Going On Retreat: Prayer Requests Welcome
Recent Comments
0 | Leave a Comment
"Jeanne d’Arc, Albert Lynch (1851-1912) , does anyone know who is the person that posed ..."
artisamazing 10 Most Gorgeous Paintings of Joan ..."
"My heart breaks for the Christians (and other minorities) in hte middle east. They will ..."
Manny NEW Syrian Archbishop’s Letter: Will We ..."
"This movie was painful to watch for more reasons than I'll enumerate here. Others like ..."
KH Sr. Helena Burns Reviews: War Room
"Anything's possible."
Truth Seeker What Are the Gifts of the ..."
Browse Our Archives
Related posts from Pursued by Truth