10 Most Inspiring, Funny and Wild Tweets From Pope Francis’ US Trip 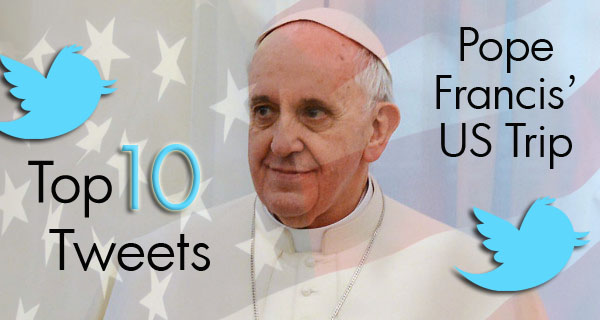 Twitter saved my life during the pope’s recent visit.

I was pretty bummed that I was not able to go see Pope Francis. Several of my sisters were able to go, but alas our work must go on so some sisters had to stay home and hold down the fort.

I lived vicariously through the amazing tweets, funny videos and overall enthusiasm that practically burned through the screen.

Here are some of my favorites:

1. I visited you in prison:

My absolute favorite pic from #PopeinUS – taken when he visited inmates in a Philly prison. (Matt 25:39-40) pic.twitter.com/5C50NEF0tW

2. Time flies when you’re having fun!

This is by far my favorite Vine from #PopeInDC. https://t.co/atdfAb6a6H

This is probably how @srseanm and the other #MediaNuns going to Evening Prayer with #PopeInNYC are like on the INSIDE pic.twitter.com/dZ4Umt2LfU

What a look of pure JOY on @Pontifex as Theresa, a @SpecialOlympics cheerleader, rushes to greet him! #PopeInDC pic.twitter.com/NpOHykjycZ

5. Happiest person in the world?

7. Pope Francis, the Rock of the Church, as Rocky:

Everyone is getting decked out for #PopeinNYC: we even have Pup Francis. (pic: @petchat) pic.twitter.com/x1nlaM6nqz

How do you make #PopeFrancis laugh? Dress your baby up like a mini pontiff: http://t.co/7r2OmuoM7t #PopeInPhilly https://t.co/yBCRWQbaJR

10. Going back to normal life:

Going through pope withdrawal. I think I need a support group for this 🙁 #PopeInPhilly #PopeinUS #PopeFrancis

Do any of you have favorite tweets, videos or pictures from Pope Francis’ visit to the United States?

Add them in the comments! 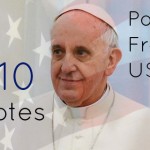 October 1, 2015 St. Therese, Pope Francis, and 3 Inspiring Suggestions
Recent Comments
0 | Leave a Comment
"Jeanne d’Arc, Albert Lynch (1851-1912) , does anyone know who is the person that posed ..."
artisamazing 10 Most Gorgeous Paintings of Joan ..."
"My heart breaks for the Christians (and other minorities) in hte middle east. They will ..."
Manny NEW Syrian Archbishop’s Letter: Will We ..."
"This movie was painful to watch for more reasons than I'll enumerate here. Others like ..."
KH Sr. Helena Burns Reviews: War Room
"Anything's possible."
Truth Seeker What Are the Gifts of the ..."
Browse Our Archives
get the latest from
Catholic
Sign up for our newsletter
POPULAR AT PATHEOS Catholic
1

It Begins With Wine at a...
Steel Magnificat
Related posts from Pursued by Truth