I’ve made a huge mistake.

You see, for some time, I’ve had this mantra: “Life doesn’t get easier, so you’ve just got to get stronger.”  It’s a real “pull yourself up by your bootstraps” sort of pep talk I give myself with some regularity when facing daily challenges in reconciliation work and in my personal life.  The mantra has served me well to this point, when I’ve realized that sometimes you just can’t get strong enough fast enough for the demands at your doorstep.  And that is the point at which I have found myself the last several months, causing me to suffer from things like burnout.

Perhaps like me, you sometimes find yourself crying out like the freed-from slavery Israelites, lost in the desert, feeling the hunger pangs of starvation setting in, “Have you brought us this far just to let us die?”  Then God sends the manna from the skies, falling from heaven to sustain you, and you shovel it down your throat with ferocity thinking, “Okay, maybe I can sustain like this for another forty years while I wander about in this dusty desert.”  But is that all our God provides?  Sustenance?

God the Sustainer sometimes seems to fall short.  Sometimes sitting in the dirt munching on manna doesn’t seem enough when you know there’s a Promised Land just out of sight.  Sometimes our hunger pangs are resolved for the moment, but our appetite is left deeply unfulfilled.  In the already-but-not-yet kingdom, is this what God does?  Merely sustain us?

Paula Fuller, at the Duke Divinity’s, Reconciliation Summer Institute in 2010, says no.  In a short five-minute talk that you should listen to here, she reminds us of the Acts 3 account, where a beggar asks Peter and John for money, something to sustain him.  Peter responds, “Silver and gold have I not, but such as I have, I give unto you.  In the name of Jesus, rise up and walk.”  Some of us, she says, are not just injured from life’s difficulties.  We are crippled.  Our sorrows have quite literally debilitated us.  Fuller says, “When we are in that state of feeling crippled, sometimes we think the best that God can do is sustain us. [Our prayer is] Lord, we just need you to give us what we need to endure, to stay in this place.”

But like Fuller, I think God has something more for us than sustenance, and I think it can oftentimes only be ushered in when we truly learn to first lament.  Our God is one who says, “Sustenance?!  No. I am ushering in a new order.  I give you healing, reconciliation, shalom, justice and peace wed together.  I give you the Promised Land.  I give you no more weeping and mourning. I give you walking, leaping, and dancing.”

The other night as black ink, mixed with tears, flowed from pen to paper in my journal, I recalled my own grief at having to settle for less than the Promised Land in various unfulfilled longings in my own life, which make me ache with sorrow.  And then, I realized my error.  In an effort at “being okay”, in a good-hearted attempt to embrace gratitude for the manna,  I had never actually asked God to provide the longed-for Promised Land.  I had only despaired when he had not. I was like the beggar, asking for God’s sustenance, settling for a few alms to get by, forgetting he could heal my crippled state.

In my sorrow, I have often given in to the temptation to mourn instead of to lament.  Mourning allows us to be sad for that which we have lost, missed out on, or failed at.  But lamenting frees us to experience the dramatic weight of our present grief, longing, and sorrow in light of a future hope to come.  Our lamenting is not made shallow in light of the hope we have.  Our lamenting is made more bitter, as we recognize the disparity between our current state and that which is to come.

In a lamentless mourning,
our cries are born from the insatiable quality of desert-given manna.
But in true lament,
our cries are in longing for the Promised Land, the only thing which will finally and fully satiate us.
In a lamentless mourning,
our tears are in recognition of our bereftness.
But in true lament,
our tears accompany our bereft requests for the Fulfillment.

Until we look toward Canaan and ask for God’s mercies to carry us there, lament never actualizes in our bones and completes it’s work in us. We lament because there actually is a Promised Land, and it’s one we can almost-but-not-yet taste.  Until we can properly mourn the profound brokenness we are experiencing in the here and now, we will never have clear view of the fullness of his coming restoration.

I fought lament, thinking it would worsen my burnout. I was wrong.  Lament is not the cause of burnout, it’s the resolution.  And embracing lament is timely right now during Lent, the designated Christian season for the practice of lament.  In Lent we recognize our finitude, our brokenness, and our frailty while we long for the comforts of things we have given up.  In lament we acknowledge not just our crippled nature, but that we serve a God who can make us leap and dance.  The deeper our lament, the larger a space we carve out in our spirits for hope to fill.  It is true that God is the one who is Sustainer in our present sorrows.  But He is also a God who restores us to the Promised Land.  If we run from our longing for shalom we will suffer numbness or despair.  But if we lean into it, we will give God room to build in us his hope.  When we are most emptied, He is most able to fill us to overflowing.

Lamenting cries, “Maranatha, come Lord Jesus and take me to the Promised Land where I and my people can dance, can leap, can celebrate your total restoration!  Come and take our brokenness to the mouth of the 72-hour old tomb, where you resurrect the dead in us.” 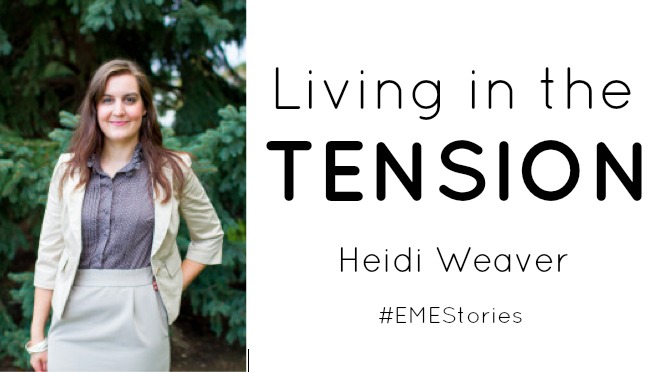 Evangelical
You Don't Have To Choose Between Jesus &...
Questianity

Evangelical
The Big Juicy One
Questianity
TRENDING AT PATHEOS Evangelical