The topic of music is one that is much discussed among Muslims, especially the youth. The web is full of humongous articles outlining the tiniest details of which instruments are allowed (if any), and the forums are full of questions regarding music. At a time when we should be focusing on matters like education, justice, and human rights; we’re still stuck at an almost laughable issue: Whether it is permissible for a Muslim to listen to music or not? But let’s not digress; and get to the heart of the matter.

In traditional Islamic thought, it is widely believed that music is forbidden in Islam as it is considered a mere waste of time that may have negative effects on the listener, and thus deter people from practicing Islam. The Hadith contain contradictory rulings on the subject of music, with some allowing it and others forbidding it. Hence, both the proponents and opponents of music justify their position by quoting Hadith that support their viewpoint.

To judge whether a thing is forbidden in Islam from a contradictory secondary source would not be a very wise choice. Let us then explore this topic from the Quran, as it acts as a Furqan (Criterion) over any other secondary source.

But before we do that, I feel it is vital for the reader to understand that things are neither positive, nor negative; they’re neutral in nature. It is how you use it that deems it beneficial or detrimental. A knife, for example, is a neutral object. Just because a knife could be used to harm another being does not mean that we should ban it and forego its positive uses.

With that being said, the same idea applies to music. Music that encourages positivity is a very useful means to uplift your mood, and motivate you. It is nourishment for the soul and counts among the many blessings of God to us humans. However, music that promotes negativity such as promiscuousness and lewdness should simply be avoided, just as you would avoid any other detrimental thing. After all, the whole point of Islam is to make responsible decisions in life. Is it not? 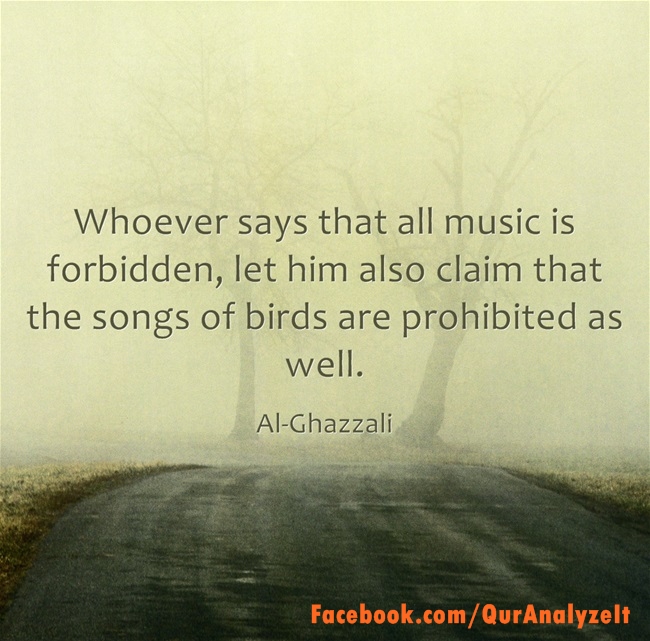 Coming to the Quran, it does not specifically refer to music in its discourse. What that means is that this is an unimportant subject, for which you get to make the judgment call based on reason and experience. However, although the majority of conventional scholars on Islam quote two verses to justify the prohibition on music, a careful reading of the Quran serves to dismiss this. Let us then analyze these two verses:

“Tempt and allure them with your voice such of them as you can. You may prompt them into armed conflicts, have a share in their resources and children, and give them (false) promises. And whatever Satan promises them is but meant to delude the mind.” Quran, 17:64

I find that the reasoning that goes behind prohibiting music is very simplistic indeed; for it demonizes music, as a whole, based on some songs that encourage immorality. Not staying true to the Quran holistically, traditional scholars would have you believe that the voice of Shaitan used to tempt, and allure you refers to music. Again, what about the music that promotes justice, equality, and peace? The argument falls flat on the face.

As a matter of fact, this “voice” is clearly defined in the last chapter of the Quran:

“(I seek refuge) From the evil of the sneaking whisperer who whispers (evil) in the hearts of people.” Quran, 114:4-5

The Shaitan deludes you in only one way: evil inclinations and suggestions that suddenly prompt up within yourself, acting counter to your nature. This is how it misleads us, and gives us “false promises of hope.”

Among the people, there are those who uphold baseless narratives (Lahwal Hadith), and thus divert others from the path of God without knowledge, and take it in vain. These have incurred a shameful retribution. Quran, 31:6

However you define and interpret “Hadith”, the purpose it plays is that it diverts people from the path of God – this is the defining phrase. This actually cements my point that good music, which in no way diverts you from godly virtues, is perfectly suitable and does not fall into the category of “baseless Hadith”.

A piece of advice:

Forbidding things that are not explicitly referred to in the Quran is an act that is severely condemned by God as it leads to the misuse of religion to enslave people in the name of Islam by the “holy men.” It is revealing to observe that the scholars who forbid music in the name of Islam suddenly deem singing and *some* instruments to be permissible when it comes to religious songs, songs that overly praise Prophet Mohammad (which is risky business). Eh, double standards? Where is the consistency in approach that one would expect from a scholar?

It becomes highly problematic when additional laws and regulations are added on top of the word of God, as this leads to the complication of Islam and thus deters Muslims from practicing it. It’s not like the masses have adhered to this supposed commandment of God to not indulge in music, rather what it may do is that it may give a Muslim, who enjoys music, the impression of not being a “good Muslim”. Once you’ve established this, you have no incentive left to guard yourself from the things that are actually forbidden in the Quran, and may end up right in the midst of them.

Oh, the painful irony of it all. 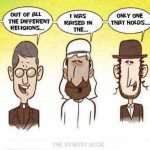