When he was just a baby at his Baptism, the priest handed a candle to his father, entrusting his parents and godparents with protecting the Light of Faith for our then tiny son.

A few years later, we glowed with pride as he stood in front of a different priest, looked at the Eucharist before him, and said “Amen” to all that was being offered to him. 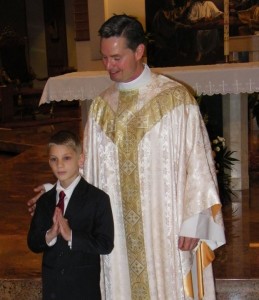 He had fought hard against vision and learning disabilities, studying and struggling to learn everything a second grader needs to know before he receives His Lord – Body, Blood, Soul, and Divinity.

Friday , we watched this same boy, now a young man, stand in front of God and a church full of witnesses, and take ownership of his Faith for himself. The tiny flame of faith represented by that Baptismal candle just a few years back, has now been entrusted to him. 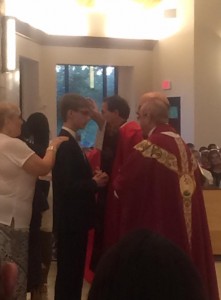 This is what Confirmation really is, it is the fulfillment of the promises of Baptism. In Confirmation, we stand in front of God and accept both full responsibility for ourselves, and the Grace which is necessary to take on such an immense burden. It’s an important step on the road to adulthood, as their Faith stops being something their parents have chosen for them, and becomes something they have chosen for themselves.

So it was on Friday evening, that we sat in the pew with our whole family and watched our son beaming with excitement as he became Catholic by choice. Just as it was with his First Communion, it has been a hard road for him as he fought to learn and remember everything necessary. He leaned  on the example of Joseph of Cupertino, and spent extra hours reading his Bible and Catechism, just hoping to know enough to satisfy our priest.

He studied and read about the various saints before selecting St Patrick for his Confirmation saint. It was a mix of heroic tales and a flannel-graph that led him to select someone he’d loved and admired since childhood for his own.

He has a few years left under our roof in which to continue growing in his own faith, but it’s thrilling to watch the man he is becoming. With every day, he becomes more steady and sure of who he is and what it is that he believes. Not because we say so, but because he does.

May 6, 2016 New Name, New Home, Same Me
Recent Comments
0 | Leave a Comment
"cheap ModafinilExcellent information, so thanks for putting out top notch content all the time"
Onlinesmartdrug A Pro-Lifer’s Experience With RU-486
"I'm sure you could write a similar story about a soldier in the German Army ..."
Donalbain The Civil War: Beyond Slavery and ..."
"I don't totally get it either but I know one thing....she obviously did something right. ..."
blueslady I Just Don’t Get St Therese
"I am very interested in your story for the sake of spreading good news,about the ..."
Tracy Erwin A Letter to My Daughter – ..."
Browse Our Archives
Related posts from Shoved to Them

Catholic
Go buy the Pope's new book!!
Shoved to Them 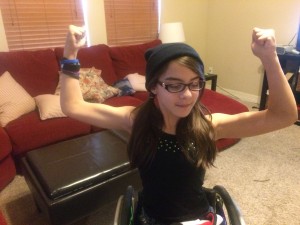 Catholic
A Letter to My Daughter - Two Years...
Shoved to Them
TRENDING AT PATHEOS Catholic