If many of the more modern Disney princesses share familial resemblances, it’s because they actually have the same daddy. Longtime Disney animator Mark Henn, who began his career in 1980, has served as lead animator on many films, including princess character designs for Ariel (The Little Mermaid), Belle (Beauty and the Beast), Jasmine (Aladdin), Mulan, Pocahontas, Tiana (The Princess and the Frog) and the bookend animated sequences of Gisele (Enchanted). He also designed Young Simba for the blockbuster The Lion King and Mulan’s father, Fa Zhou. In more recent years, he’s served as lead 2D designer on Frozen and Big Hero 6.

A man of faith and grateful for his “dream job,” Henn was gracious enough to speak to Reel Faith about his journey as an artist, his reaction to the new live-action Beauty and the Beast, how Frozen impacted his department, and his work on the newest animated extravaganza, Moana, releasing this week.

The new trailer for the live-action Beauty and the Beast just came out and blew everyone away. How did you feel watching it?

I thought it looked really good. My first thought was I recognized so many scenes that were scenes in our version that I know I animated so it was interesting to see a lot of the same shots and situations portrayed in a new way. I’m anxious to see the movie. I’m looking forward to it.

Frozen was such a huge success. How did its success affect Disney Animation?

From a practical standpoint, it got us a remodeled building. I’m sitting today in a new office. They had told us on several occasions that we needed to kind of earn it and we certainly did. Not that it was the impetus behind any of our films. We just set out to make the best film that we possibly can. We have no way of knowing the success, what’s it’s going to be on these films. Up to the point of Frozen, I’d only experienced it one other time and that was The Lion King. For this generation, this group of new artists, I kept telling them, ‘This is what we experience on Lion King.’ For me it was a second time in a career to have a film come out and make that kind of an impact. Practically they decided to take our existing building and remodel it and make it a lot nice and better for us. So that was a direct result of the success of Frozen.

So it’s the house that Elsa built?

What is so special about Moana? What makes this movie different?

It’s a world and a culture that we have not really seen or explored that much if ever and with the new technology and the tools that we have at our disposal, I think when you see it, you’re going to want to go stick your toes in that water and go for a swim because it’s amazing what the guys and gals were able to come up with. It’s a really entertaining story and it’s steeped in the Oceania/Polynesian culture and myths. It’s very entertaining. It’s a new world that we haven’t seen or spent a lot of time in. That’s always exciting for us as filmmaker to try and explore different stories and part of the world that have very interesting stories to be told, elements to their culture that inspire stories that we can tell. Moana is very much in that vein. It’s a lot of fun.

What was your role in Moana?

I was primarily one of a small crew of hand animators that animated Maui (Dwayne Johnson), he has a tattoo version of himself. We animated his little alter ego, we called him “Mini Maui” and that was what we did. That’s what I did on the film was animate Mini Maui, as well as here’s a song sequence where a lot of the background elements are hand animated. In fact, the movie opens with some hand drawn elements inspired by the designs you find in Ocenia/Polynesian culture.

What do you think kids will take away from Moana?

That’s certainly going to be as wide ranging as there are viewers, I’m sure. The key thing is there’s an element of taking responsibility on her part and actually on Maui as well. They both learn some lessons along the way. Moana is in a unique situation. You have this tension between what is expected of you in your behavior and fighting something inside of you that’s drawing you in a different direction and how you deal with that. I think there are lessons there. It’s going to depend on the viewer but there’s still a good moral there of following the passion that’s inside of you and pursuing those kind of goals.

Can you describe a little of your journey? Did you always know this was what you wanted to do?

I’m approaching my 37th year here with the company and in its simplest answer is, like Moana, this was something inside of me that I felt was what I wanted to do. I had no other aspirations beyond wanting to be a Disney animator. There were certainly obstacles and things I had to work at to get over, to get to this point. Now as I look back, I’m incredibly blessed. There’s not a day that I’m not taking a walk around the studio lot that I’m still saying ‘Thank you, Lord, for letting me live my dream.’ It’s as simple as that, really. I’m here because of God’s grace and I’m still here because of that, so I’m very thankful. I wouldn’t be here if it wasn’t for Him.

There’s an interesting story on how you came up with the look of Princess Ariel. Can you share that?

As a studio we were coming off of Splash, that’s one of Tom Hanks first big hits and Ron Howard, one of his first directing movies. Daryl Hannah’s portrayal of Madison the mermaid was probably the typical, what everybody expected, a blonde mermaid. I think we all just said ‘Let’s try something else, let’s think about something else.’ One of the directors, Ron Clemens, he was a redhead and so he may have had an influence on that. I think we tried different things. There were color issues, the red hair was very complimentary to a lot of the blues, teals and greens of the ocean. It just worked out and I think everybody, when they started seeing images with red hair, they all just said, ‘I think this looks pretty good. It will work fine.’ Jody Benson is not a redhead, not that it would have made a difference anyway. It could have. We often will take inspiration from our voice talent or people like that.

I saw that you did the bookend segments for Enchanted. Now that the sequel is coming up, will you be involved?

I don’t know yet. I had the pleasure of animating Gisele in that so we’ll see what happens with that. I don’t know too much about that yet. These things just kind of pop up and then one day it’s on your plate or it’s not. 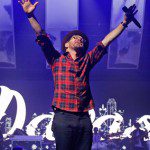 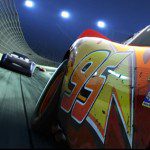