We Need To Re-Think Muslim-Jewish Relations in the U.S.

We Need To Re-Think Muslim-Jewish Relations in the U.S. January 28, 2021 Guest Contributor

We need robust, comprehensive, and genuine friendships between Jews and Muslims in the United States, and ones which go far beyond discussions of the Israel-Palestine conflict.

For many years I’ve been significantly involved in what’s often referred to as “interfaith work” between the Jewish and Muslim communities throughout Metro Atlanta. I am proud to be the first Jewish member and speaker with the Islamic Speakers Bureau of Atlanta. In my capacity as a current board member with the Jewish Community Relations Council (JCRC-Atlanta), I’ve been tasked with strengthening the bonds between like-minded individuals and organizations from both faith communities.

Jewish-Muslim relations in the US, and certainly in Atlanta, is arguably in its infancy, and not nearly as strong as it should be, given all that the two communities share.

It never sat right with me that common discourse often talks about the so-called “Judeo-Christian values,” a constructed theological tent which always excludes Islam. If nothing else, it’s a theologically dishonest phrase. It may be obvious that Judaism and Christianity share a great deal in common, but in many respects more is shared between Jews and Muslims. And certainly there is precedent for “Judeo-Islamic values” given the longstanding Jewish presence in Muslim-majority countries for over a millennia.

Jews and Muslims worship the same, unitary deity, and many of Islam’s prophets and stories are found in the Torah, even if the stories diverge somewhat. Fasting (sawm, tzom) are important for both faiths, and Islam’s preeminent prophet, Mohammed, intially encouraged Muslims to fast during the Jewish day of Atonement (Yom Kippur), and initially prayed facing Jerusalem, though he later changed the direction (qibla) towards the Ka’aba in Mecca.

Of course, there is a well known relationship between halal and kashrut — often if Muslims cannot find halal food products, they will opt for kosher ones. Charity (zakat, sadaqa and tzedakah) feature prominently in both faiths, as is the fundamental concept of justice (social or otherwise). These are only a few of many additional examples.

What has kept our two communities from developing deeper, more honest ties? In my estimation and experience, it is clear that overwhelmingly, the Jewish communities’ concern for, or outright fear of, Muslims lies largely in our own collective and individual ignorance. Most Jews are unfamiliar with the most basic tenents of Islam, and as such, misconceptions abound. Overtime, these misconceptions become assumptions, and in turn, these assumptions become prejudices — knowingly or otherwise.

In my experience, all too often what happens in public forums and even during interfaith events, is that more brass or outspoken members of the Jewish community have implicitly asserted some level of expertise on Islam, quoting (or misquoting) certain verses from the Qur’an or Hadith without any proper context, and then demanding explanations, often referring back to history when Jews often but not exclusively lived under harsh Muslim rulers and persecution. These historical ‘facts’ are bereft of context and almost exclusively made in bad faith.

It is inexcusable that Muslims are somehow expected to be held accountable for historical misdeeds, just as it is inexcusable for Jews in the diaspora to be held accountable for what is happening in Israel-Palestine six thousand miles away. Imagine the righteous anger and outcry if a Muslim person began quoting the Torah out of context in a public forum or even an inclusive event — Jews would rightfully be outraged.

The issue is widespread. While it is true that Jews are often ignorant about Islam, a significant problem within many Muslim communities stems from their ignorance about Judaism, and sometimes their conflation of theological interpretations of Jewish tribes in Arabia during the time of Mohammed with modern day world Jewry. There is also sometimes an impulse to erroneously conflate Jews who live in the diaspora with those who live in Israel — even when the motivations are ostensibly philosemitic.

The Jewish and Muslim communities in the US need a framework in which we can encounter one another as we are, and not as manifestations  of broader assumptions or communities — or stereotypical caricatures. While it is vital to understand history properly, our respective communities must first learn our own histories before claiming to understand another’s. History should not keep us tethered to a past that remains unalterable.

To this end, American Jews should be more forthright in acknowledging that, increasingly, our own communities struggle to parse out these nuances. Such differences can often be confusing to non-Jews, especially if the overwhelming majority of our community organizations, synagogues, and schools promote an obvious pro-Israel narrative, and politically fall within a broad Zionist camp (however one defines the term). To illustrate, I’ve never attended a Reform or Conservative synagogue that is without an Israeli flag showcased prominently. How are non-Jews expected to understand or interpret this? The nuanced differences between Jewish communities around the world are not always easily discernible to others, and even well-intentioned individuals can remain unsure about how to treat the relationship between the State of Israel and Jews in the diaspora.

In many cases Muslim friends and colleagues have, unsolicited, stressed their outright support for Israel to me–automatically presuming I hold certain views on Israel-Palestine which I may or may not.

Once, while living in Iraqi Kurdistan, I met a wealthy, British-educated Iraqi at a fancy engagement with exquisite food. He saw my nametag and asked me where I was from. When I told him I was American and he shook his head and said, “No, no, where are you really from?” I answered the same once more. “Well,” He said, winking and patting me on the shoulder, “wherever you’re from, you’re welcome here.” Clearly, he had identified me as Jewish, and thus by extension as somehow ‘Israeli.’

Recently, a Jewish colleague introduced me to one of his Muslim friends via email to talk about Jewish-Muslim relationships in Georgia. I was happy to become acquainted with another like-minded person, but, though clearly well-meaning and innocent, the conversation immediately pivoted to his desire to forge closer ties between Israel and his particular Muslim community.

While both of these were positive interactions, they are indicative of a larger issue — when it comes to Jewish-Muslim relations in the US, there is the perception that very little differentiates Israeli and American Jews culturally, socially, politically, or even religiously. This perception, untrue on many levels, wins out in the end, and makes it more difficult for Jews and Muslims in the United States to forge independent ties. Many of our leaders and institutions have paved the way for this perception to become accepted, and they don’t consider how such perceptions may hinder local community building in the short or long term.

A clear way to avoid such pitfalls is to collectively move beyond superficial get-togethers and interactions. The well-known organization Sisterhood of Salaam/Shalom has required that each chapter hold programming for a year before any real conversation about the conflict is discussed. This helps build genuine trust and strong foundations, and while not possible for every organization, is a model worth taking to heart. It is through genuine interaction and education that we break down self-imposed walls created out of fear and/or ignorance.

As seemingly superficial as it may be, I would also rethink the food offered at such events (post pandemic). While it’s obviously important to break bread together, we need to desist with the tired, trite, and cliche “falafel and hummus” meals. It’s presumptuous and perhaps even insulting to assume that most Muslims and Jews grew up eating Middle Eastern food. I didn’t grow up eating Middle Eastern food at all. Since we’re in the South, perhaps we should offer suitable halal or kosher Southern cuisine.

Better yet, I would much rather we learn about more specific dishes and cuisines. Islam is perhaps the most ethnically and culturally diverse religion in the world: imagine how rich and beautiful the table would look if these get-togethers included dishes from across the Muslim and Jewish kaleidescope.

To make a gastronomic analogy: For far too long we’ve been focusing on the mezze, the hor d’oeuvres of these conversations by sticking with surface-level and even safe issues to discuss. There is absolutely a place for those conversations, but we’ve been collectively stuck eating the appetizers, if you will. There is so much more that American Jews and Muslims can share and discuss and learn together. It’s now time to begin the main course. 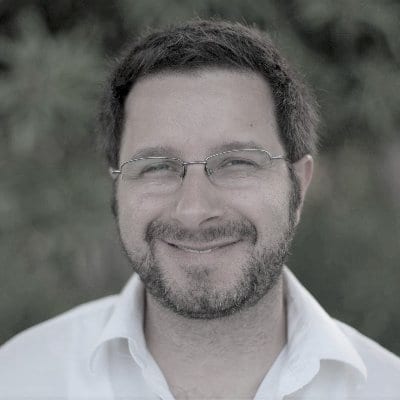 About Benjamin Kweskin
A specialist in Middle East politics and cultures, Benjamin Kweskin has been active in strenghening Jewish-Muslim relations for many years. He is also an aspiring homesteader and oud enthusiast who likes to cook. @BenjaminKweskin You can read more about the author here.
Previous Post

January 16, 2020
An Old Debate Over Religion in School Is Opening up Again
Next Post

February 24, 2021 Purim At The Farmer’s Market: How Helping Others Lets Us Show Ourselves
Browse Our Archives
get the latest from
Religion Now
Sign up for our newsletter
POPULAR AT PATHEOS Public Square
1

Faith in numbers: Behind the gender...
The Conversation
Related posts from Religion Now