Many have blogged about the recent New York Times pieces on evolution and science education (see, among others, Science & Religion Today, A Blog Around the Clock, Thoughts in a Haystack and Antiquitopia). I was rather dismayed by Jim West’s depiction of it as about “indoctrination” into evolutionary thinking.

I cannot be too critical, since I was once a loudmouth on the young-earth creationist bandwagon. I’ve addressed this subject countless times before on this blog. But let me address the issue on this occasion in terms that I think Jim will appreciate.

Is it indoctrination if we teach astronomy and make no mention of astrology?

Is it indoctrination if we teach the heliocentric view of the solar system without giving equal time to geocentrists?

Asking for equal time for “alternatives” to evolution is in exactly the same category. It is asking that a point of view with nothing but questions and complaints to offer be treated as the equal of a scientific field of research that has been remarkably productive and consistently confirmed by all sorts of evidence not available when the theory was first formulated. The media makes much of being “fair” in trying to always hear another side of the story, and there is something indeed laudable about checking to see if there is an opposing viewpoint. Too many of us forget to do that, and forget too often. But not every opposing viewpoint has merit, and the reason we have education standards is to ensure that educators do not waste time on nonsense to the detriment of things that are truly important, valuable, and (ultimately) true.

Jim knows that many would criticize mainstream Biblical studies, where we reach conclusions that some do not like, and there are plenty of fundamentalists around who will accuse us of being indoctrinated into a liberal approach, rather than having reached conclusions because of compelling evidence persuading us to reach conclusions we ourselves did not initially find appealing or even palatable. I hope Jim will investigate the subject of evolution with the same critical eye he often applies to historical and Biblical studies.

To relieve the stress this subject often causes, I offer this cartoon from PTET (and apologize for the language, but it was too amusing not to share it): 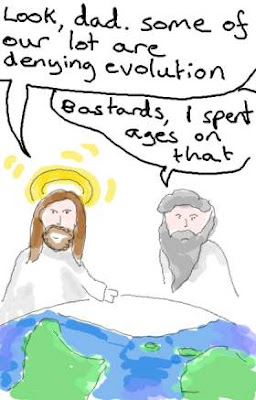