Although I think the cartoon (actually it would be better to call it a poster) I’m about to share speaks for itself, it makes a key point that should not be missed about how Intelligent Design goes about its business and tries to achieve its aims. I can’t imagine anyone taking seriously in any other discipline a demand that a viewpoint that has produced no genuine results, made no contributions to our understanding, and in so many other ways failed to pass scholarly muster. I hope that any educators who do mention ID will show the picture below. The only way to accurately “teach the controversy” is to explain to students why, among experts in biology, paleontology, genetics, and other relevant disciplines, there isn’t one. This isn’t to say that there aren’t controversies in the natural sciences. There are plenty of them. But “ID vs. evolution” isn’t one of them, because this is not a case of two viewpoints interpreting the same evidence in different ways, but of one viewpoint taking the evidence seriously and the other trying to spin it to promote an ideology. The painfully ironic part, of course, is that ID proponents use the same language to suggest that that is what mainstream scientists are doing. But the evidence demonstrates otherwise, if one takes the time to investigate the matter.

I’ve been trying to take a similar approach in my courses on the Bible. In the humanities there is certainly far more room for more than one interpretation of the data. But it is still crucial that students learn also to recognize where legitimate differences of interpretation end and ideologically-motivated spinning and selective quotation begin. Students (and people in general) need to understand both that experts can disagree, and that experts do not disagree all the time about everything. 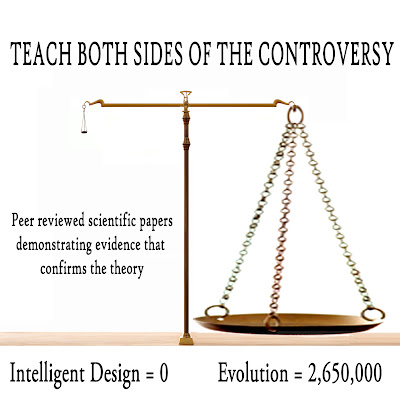