Creationism’s Cartoon Physics (From the Archives) 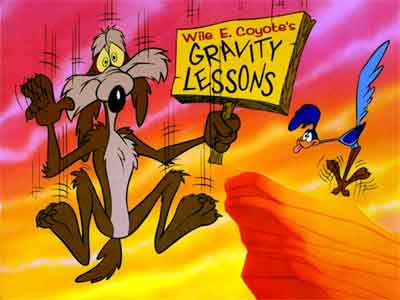 Wile E. Coyote heads towards the cliff but doesn’t see it. We’ve all seen the cartoons – he can keep running, until he looks down and notices there is no longer anything beneath his feet to support him.

This is, in essence, the situation of the young-earth creationist movement. Every single objection that did not consist of pointing at unanswered question – and even some of those – has been answered by scientists, and still more evidence than we might have hoped has been forthcoming. Young-earth creationists have complained about the paucity of fossils of transitional forms, and we have been fortunate enough to find many good examples. Young-earth creationists claimed that they eye could not have come about in stages, yet we now know of organisms with all the intermediate stages we could imagine being part of ocular evolution. They claimed that the earth is young, but radioactive dating proved them wrong. They claimed that the flood deposited the fossil remains, but then came the reply: ferns cannot run.

When science disappeared from beneath their feet – although it was never strictly there – they kept running, assuming the Bible to still support them. But they did not consider the consequences of taking the flood story literally. The waters above would have blocked out the wavelengths of light needed by plants. The human and animal inhabitants of the ark would have had to carry all the infectious diseases that depend on them (unless they want to claim that God replenished the world with viruses and deadly bacteria after the flood). In addition to the difficulties and inconsistencies in their interpretation of the story of Noah, and their ignoring of the clear evidence that the Mesopotamians had a version of the story written down before the Israelites wrote theirs, they also cannot take the creation stories literally. Most of them only read the Bible in English translation, so they can ignore the dome, ignore the fact that people do not only reason with their hearts but feel compassion with their bowels, and for all these ancient authors knew, such statements were literal. Historical study has shown that, far from being something that science appeared on the scene to combat, science gave rise to the forms of fundamentalism and attempts at literalism we now find. In earlier times, “truth” was (like “faith”) about committment rather than factuality and precision, since most people did not deal in texts and alphabets. When Young-earth creationists are asked to provide some explanation of how the various stories mentioned could be literally true in the modern sense, in light of all the relevant considerations, they rely on the fact that most people haven’t thought the matter through in detail. They rely on the fact that many religious believers want them to be right, and so if they provide but a few plausible-sounding responses (such as boxcars on the ark) they trust that their supporters will not examine other more troubling details.

All the scientific evidence that was amassed already in the 19th century changed the minds of skeptics, like Charles Lyell and Adam Sedgwick. Far from the scientific establishment being hostile to faith, initially most were disinclined towards Darwin’s theory because it was assumed that science would match up with Scripture. But there is a key difference between the initial skeptics of Darwin’s theory and modern anti-evolutionists. The former saw the evidence that was provided already in their time and changed their minds. The modern young-earth creationists, on the other hand, continue to make ridiculous objections and obscure the issues in spite of much more evidence that has come to light. And the few pieces of possible evidence that they had been able to claim provisionally – the small amount of moon dust, human footprints alongside dinosaur tracks – did not hold up under scrutiny.

They have gone over the edge of the cliff, like Wile E. Coyote. Neither the Bible nor science is holding them up. The only question now is, how long will they be able to keep going before they finally look down? Can this cartoon go on forever? They remind me (and Sean Carroll) of the Black Knight from the Monty Python movie: “Tis but a scratch”.

. I highly recommend the book. For more on cartoon physics, click here.

May 25, 2011 2012 Society of Biblical Literature International Meeting
Recent Comments
28 Comments | Leave a Comment
"They are done by non-religious or post-religious people in societies that have had a strong ..."
James F. McGrath Gamified Grading in a Pandemic Crisis
"All that could have been, and is, done by people not affiliated with any religion. ..."
Nixon is Lord Gamified Grading in a Pandemic Crisis
"You don’t seem to understand the core issues, and don’t seem to grasp the basics ..."
James F. McGrath Philippians 2 and the Historical Jesus
"Ok thanks for your opinion and thanks for.not answering the question, now I guess that ..."
Vladimir Romanov Philippians 2 and the Historical Jesus
Browse Our Archives
Follow Us!