Today in my freshman class “Faith, Doubt and Reason” the text for discussion was Rene Descartes’ Meditations on First Philosophy

One point I sought to highlight early on is Descartes’ understanding of doubt as a sacred duty: Descartes’ skeptical approach to knowledge and reasoning was an expression of his religious faith, with the aim both of avoiding being deceived himself and persuading others to believe in God.

Today many view doubt as an expression of irreligion. But since all religions seem to emphasize the importance of not being deceived, and circular arguments are ineffective at persuading anyone to change their mind, it would seem that any religious believer who is unwilling to doubt is bound to be refusing to heed their own religion’s warnings about the danger of being led astray, and refusing to learn to reason in such a way as to be able to make the case for their own faith.

I think that religion today would benefit from a recovery of Descartes’ emphasis on the duty of a religious believer to doubt. What do others think?

Let me close by sharing an image that depicts the circularity of argument that Descartes uses as an example, which hopefully also illustrates why such an argument will never persuade someone not already convinced of the truthfulness of some part of it. 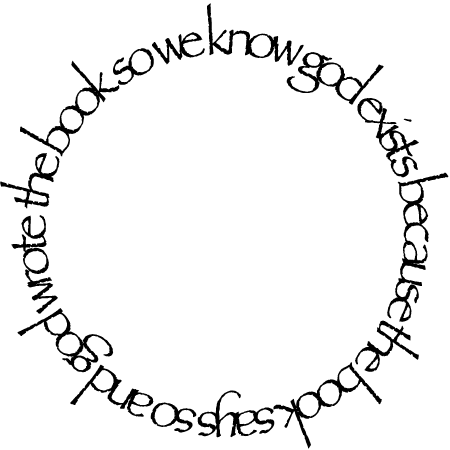 October 18, 2011
How To Make My Spidey-Scar Sense a Disturbance in the Time Vortex
Next Post

October 19, 2011 Have We Been Going About This All Wrong? Fun With Conspiracy Theories
Recent Comments
9 Comments | Leave a Comment
"Biblical reference to Ruth who did not want to be part of her people anymore ..."
gospelaccordingtodoctorwho Doctor Who: Fugitive of the Judoon
"Thankyou. I love this classic Asimov story."
StevoR How It Happened (Isaac Asimov)
"Might I also add a couple of things which reminded me of The Time Machine. ..."
Dalek1963 Doctor Who: Orphan 55
"The revelation has been done before--see Planet of the Apes--but it works because it's true. ..."
Melanie N. Lee Doctor Who: Orphan 55
Browse Our Archives
Follow Us!

'You're scared? I've gotta walk out of here...
The Switcheroo embodies what Trumpism is all about. Plus: The cross-burning '20s,...
view all Progressive Christian blogs
What Are Your Thoughts?leave a comment
Copyright 2008-2017, Patheos. All rights reserved.