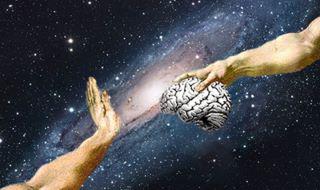 I thought the picture above (which a friend shared with me on Facebook – since it was done privately, I won’t attribute it to him unless he says it is OK to do so) said everything that needs to. The young-earth creationist denies God in many ways: twisting the Bible when it suits them; demeaning those Christians who actually know something about either science or the Bible, if not both; making the Creator out to be a liar.

But the most fundamental way the young-earth creationist denies God is by doing what the picture depicts: rejecting God’s gift of the brain.

As someone who used to be a young-earth creationist, I can tell you that such people are not necessarily unintelligent. In fact, it takes an incredible amount of ingenuity to construct and maintain a worldview like young-earth creationism, to persuade people that it is what both the Bible and true science teach in spite of mountains of evidence to the contrary.

And so the rejection of the brain and human understanding by young-earth creationists, like their use of the Bible, is an exercise in picking and choosing. In other words, it involves doing precisely what they deny that they do.