Doctor Who: Mission to the Unknown

Doctor Who: Mission to the Unknown December 14, 2011 James F. McGrath 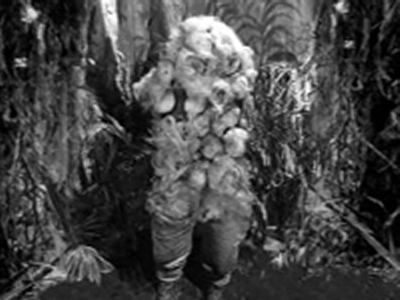 The Doctor Who episode “Mission to the Unknown

” (sometimes also referred to as “Dalek Cutaway”) was the first episode to air that featured none of the regular characters, including the Doctor. It is a single episode with a single part, serving as a prelude to the twelve-part story “The Daleks’ Master Plan.” In the episode, a group of people has arrived on the planet Kembel. One of them is an agent from earth with a secret agenda: investigate whether the Daleks have established a presence on the planet, and find out what they are planning.

The plan fails, as the humans meet their end largely as a result of Varga plants, which are genetically-engineered creatures from Skaro which had been created by the Daleks for defensive purposes. Their thorns transform someone who is pricked with them into a homicidal creature.

But although the effort to get word to earth fails, a message recorded by the agent will eventually be found, and allow the Doctor and others to get clued in about…the Daleks’ master plan.

It is interesting to consider that concerns about “poisons” which, if they penetrate the body, can turn us into monsters are not strictly speaking only found in science fiction, nor only there and in fantasy. Purity laws about clean and unclean foods often serve a similar symbolic function, delineating insiders and outsiders in reference to what is ingested. The idea that that which is foreign can get within us and transform us connects this episode of Doctor Who with ancient Israel’s purity regulations on the one hand, and the paranoia about traitors and spies in our midst typical of the Cold War era. But while some sci-fi reinforces such traditional concerns and re-expresses them in this genre, sci-fi also does a wonderful job of challenging the sorts of fears about the “other” which drives them.

Doctor Who is regularly found to be scary. But when it gets us to look at ourselves and our prejudices closely and challenges them, it does something potentially far scarier for some than monsters ever could be.

December 13, 2011
The Greatest Action Story Ever Told
Next Post

December 14, 2011 Santa at the Intersection of God, Spidey and Spanish Inquisition
Recent Comments
1 Comment | Leave a Comment
Browse Our Archives
get the latest from
Religion Prof: The Blog of James F. McGrath
Sign up for our newsletter
POPULAR AT PATHEOS Progressive Christian
1