Proportional Time for Creationism: A Simple Solution to a Science Education Conflict

Many have called for “equal time” for creationism in science classes, while the vast majority of people oppose such measures. But conflicts over this issue appear time and again, wasting valuable time and resources of lawmakers, courts, schoolboards, and everyone else involved.

In a comment on Facebook, Ed Babinski suggested a brilliant solution that both sides should find acceptable: proportional time for evolution and creationism.

The process of evolution has taken roughly 4 billion years. Young-earth creationists say that everything was made in the form in which we now find it in six days. Ed’s suggestion? Simply apportion time proportional to the amount of time each viewpoint says was involved in the formation of life into its present form. Since evolution involves a longer time period, it is only natural that one will spend more time explaining and exploring it.

Keeping that number handy, we then calculate how much time a biology class in a public school will spend on evolution. While the majority of high school biology teachers spend between 3 and 15 hours on evolution, those who consider it important may spend as much as 18.5 hours on it. Let’s maximize the time for everyone and go with the higher end of the spectrum.

If one devotes 18 hours of class time to evolution, then all one has to do to calculate the proportional amount of time to spend on creationism is multiply by the decimal we calculated earlier.

Rounding up to the nearest whole unit of time, that means that roughly one millisecond of class time should be devoted to creationism.

Obviously, if a teacher spends less than 18 hours on evolution, then to be fair, they really ought to reduce the amount of time spent on creationism proportionately. However, as an act of generosity on the part of the supporters of evolution, given that they will be getting the vast preponderance of class time, I would argue that creationism simply be given a millisecond across the board, even by those spending significantly less than 18 hours on evolution.

As it happens, the proportion also seems to do justice to the amount of evidence for each viewpoint. 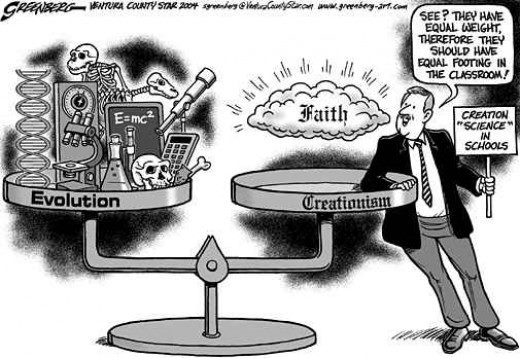 And so this seems like a doubly fair solution. What do others think? Would this be acceptable to all parties?

December 31, 2011 Happy New Year!
Recent Comments
23 Comments | Leave a Comment
"hey mr dr lost fan. one of your video is not available anymore, either remove ..."
irshad Is Google Smarter Than Your Pet?
"see? some church padres forgot this like the one who said to donate to his ..."
irshad A Reminder: Jesus Didn’t Say “Bully ..."
"so checked eutychus blog and obviously this patheos.com but all i got is that original ..."
irshad Fork Criticism: Understanding Biblical Criticism Through ..."
"considering james f. mcgrath wrote some fiction stories how is he gonna judge all the ..."
irshad The Root of All Evil?
Browse Our Archives
get the latest updates from
Religion Prof: The Blog of James F. McGrath
and the Patheos
Progressive Christian
Channel
POPULAR AT PATHEOS Progressive Christian
1