Bob Cargill pointed out to me an article in CNN about the latest volleys in the Star Trek vs. Star Wars wars, with not only fans but actors getting involved in the controversy (and George Takei’s entertaining attempt to argue for the need for peace so as to face a common foe).

What’s that you say? You do have to choose? 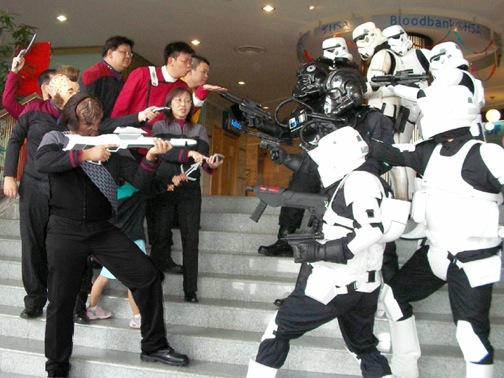 And so this really is a matter of perspective – of defining canons and inhabiting symbolic narrative universes. One cannot inhabit the universes of Star Wars and Star Trek simultaneously.

Or can one? Even in the examples of religious texts and traditions I shared earlier, the matter is not at all clear cut. Most Christians might agree that one must choose between the Bible and the Gita, but Hindus will often regard the choice as unnecessary. Orthodox Christians argued strenuously that one has to choose between Christianity and Gnosticism. But many Gnostics were Christians, or at least considered themselves such.

And in the case of the New Testament canon, it is common to forget the controversies that preceded the inclusion of certain works in the collection, and to miss that some works within it really do offer incompatible perspectives (e.g. the infancy narratives in Matthew and Luke, or the Christologies of Luke and John).

When it comes to science fiction fandom, it is possible to adopt any of the three stances towards other religions delineated in Christian theology. One can be an exclusivist, and say only your favorite series/show/movie is good. One can be an inclusivist, and say that while yours is better, others are not therefore necessarily bad – or at least, not completely bad. And one can be a pluralist, and treat multiple stories/programs/films as equal.

If one treats both Star Trek and Star Wars as equal, then are you both a Trekkie and a Jedi, or are you neither, but a generic sci-fi fan? Is being a fan a matter of appreciation, or of exclusive appreciation?

It seems to me that this is a fine example in relation to which to explore the relationship not only between different canons and traditions, but also openness to learning from and appreciating others while also being committed to one’s own tradition.

So what’s in your canon? Is it broad enough to encompass both Star Wars and Star Trek? And whatever your answer to that question, there are also others: Is the expanded universe canon? Original series? Prequels? Is Jar Jar in your canon or relegated to the apocrypha? What’s you “canon within the canon”?

I’d welcome discussion from fans and detractors of all stripes. And as you discuss, may the Force be with you as you live long and prosper.

December 31, 2011 Proportional Time for Creationism: A Simple Solution to a Science Education Conflict
Recent Comments
21 Comments | Leave a Comment
"hey mr dr lost fan. one of your video is not available anymore, either remove ..."
irshad Is Google Smarter Than Your Pet?
"see? some church padres forgot this like the one who said to donate to his ..."
irshad A Reminder: Jesus Didn’t Say “Bully ..."
"so checked eutychus blog and obviously this patheos.com but all i got is that original ..."
irshad Fork Criticism: Understanding Biblical Criticism Through ..."
"considering james f. mcgrath wrote some fiction stories how is he gonna judge all the ..."
irshad The Root of All Evil?
Browse Our Archives
get the latest updates from
Religion Prof: The Blog of James F. McGrath
and the Patheos
Progressive Christian
Channel
POPULAR AT PATHEOS Progressive Christian
1