The Latest on the Indiana Creationism Bill: Adding Still Other Views on Creation

“Unconstitutional Crusade Hurts Critical Thinking” is the title of a letter to the editor which appeared in today’s Indianapolis Star about the creationism bill that is going before Indiana’s senate. You can read it online.

Also in the news today, as reported by the Daily Reporter and Skeptic, was the fact that the bill was amended to require that anyone teaching about religious creation theories include the full range of these and not only Judeo-Christian ones.

The aim of that amendment is to make those who are trying to promote their own religion in science classes think twice, but if this law is passed in a form that relates to science classes, even teaching about a range of non-scientific religious viewpoints will not lessen the inappropriateness of the legislation. 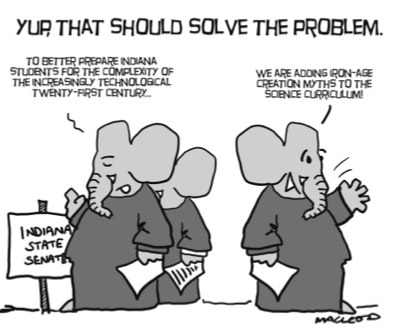 January 31, 2012
Doctor Who: The Tenth Planet (and the First Regeneration)
Next Post

January 31, 2012 Right and Wrong about the Slippery Slope (Rachel Held Evans)
Recent Comments
1 Comment | Leave a Comment
"Intriguingly enough, since you mentioned "No one has suggested that Jesus was merely a carbon ..."
Chris H #JohnTheBaptist Enoch Seminar Nangeroni Meeting Day ..."
"Bestest post,..... My daughter who is incapable of being on the internet due to genetics ..."
davidt Evil In the Youth Group
"From my perspective this comes from a really problematic tendency in neo-liberal thinking to promote ..."
Chris H Jesus Wasn’t Unique
"It definitely seems memeworthy to me!https://uploads.disquscdn.c..."
James F. McGrath Evangelicals, Objective Truth, and the MSM
Browse Our Archives
get the latest from
Religion Prof: The Blog of James F. McGrath
Sign up for our newsletter
Books by This Author Books by James F. McGrath