As if the news of attempts to get creationism into science classrooms were not bad enough, there is another proposed law that seeks to allow schools to mandate the recitation of the Lord’s prayer.

Sec. 4.6. (a) In order that each student recognize the importance of spiritual development in establishing character and becoming a good citizen, the governing body of a school corporation or the equivalent authority of a charter school may require the recitation of the Lord’s Prayer at the beginning of each school day. The prayer may be recited by a teacher, a student, or the class of students.

(c) A student is exempt from participation in the prayer if:

(1) the student chooses not to participate; or

This is clearly unconstitutional. But even if it weren’t, why would anyone want to put students from non-Christian traditions in the position of being bullied and made fun of for not participating in such rituals?

But this should be an issue even for Christians. All it would take is for someone to propose allowing prayers from other traditions – even another Christian one, say the Hail Mary – for this sort of thing to suddenly become controversial among Christians. But of course, in our diverse society, one might ask why we couldn’t see something along the lines of the short story “Children, Pull Out Your Chickens” or what is depicted in Hemant Mehta’s cartoon: 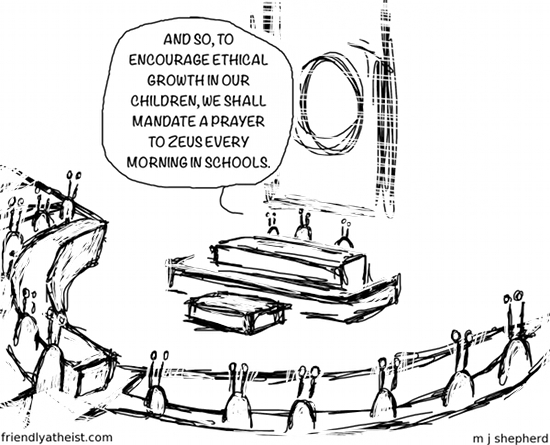 We should avoid having anyone dictate to children to pray something specific in schools. Public schools are places where common values and generally accepted knowledge are conveyed to children, not sectarian viewpoints of any sort.

Laura Conaway posted on this at the Maddow Blog, and unfortunately brought that infamous bogus supposed translation of the Lord’s Prayer into the discussion. It is in fact an English prayer with no relationship to anything in the Aramaic version of the prayer. I’ll gladly post on this separately if there is interest.

Let me close by offering one more subtle reason why Christians ought to be opposed to this sort of thing, from Bob Cargill:

There are good Christian reasons to be opposed to this legislation. Time to contact our legislators again…

January 12, 2012
Further Interaction About the Talpiot Tomb
Next Post

January 13, 2012 Torchwood: Dead Man Walking
Recent Comments
30 Comments | Leave a Comment
Browse Our Archives
get the latest from
Religion Prof: The Blog of James F. McGrath
Sign up for our newsletter
POPULAR AT PATHEOS Progressive Christian
1 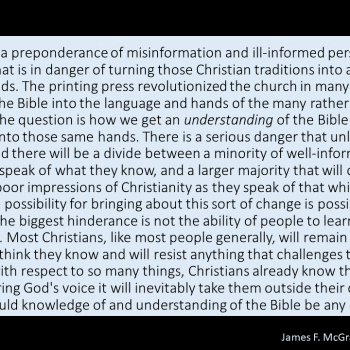