As I continue to watch through Torchwood, I am struck by how much this darker, raunchier, more pessimistic spin-off of Doctor Who focuses on religious themes, imagery, stories and symbols. 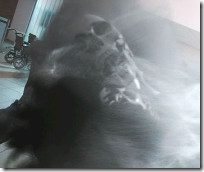 In this episode, “Dead Man Walking,” we learn that a church had been built on top of a site where a resurrection glove had been found half a millennium earlier. Earlier, when Suzie had been killed and brought back to life, she said that there was only darkness, and the sense that something was there in it. Owen had been shot in the previous episode, and being brought back to life with the second resurrection glove, he now says something similar. But this time it turns out that the thing in the darkness is a real entity on which legends of the grim reaper were based. It was waiting for an opportunity to return and kill freely on earth.

It says, “I will walk the Earth, and my hunger knows no bounds.”  (I love when Ianto says that he Googled the phrase and the top hits were ads for Weight Watchers).

Just as the last episode had a connection with LOST, this one seemed to as well, when the grim reaper manifested itself as black smoke before taking shape as a skeleton.

The legend of the previous time that the grim reaper walked the Earth said that he was stopped by faith. It turns out that “Faith” is the name of a little girl, one who had been raised with the resurrection glove on that occasion. Being already dead, she had nothing to lose, and so could defeat death – as Owen does in this episode.

Owen was comical and full of black humor, unsurprisingly. I laughed when he said “Owen Harper’s soul has left the building.”

Even though the episode is full of the typical pessimism and even apparent nihilism that characterizes Torchwood, there is still a profound undercurrent of religious exploration. Why else revive (if you’ll excuse the pun) the figure of the grim reaper, rather than simply introduce a previously unknown alien? Why have a figure who has already died and been resurrected be the one who can defeat death?

Torchwood provides illustration yet again that science fiction, even when it seeks to replace, combat, eliminate, undermine, or reconfigure traditional religious ideas, it ends up exploring the very same spiritual terrain in the process.

January 12, 2012
The Lord's Prayer in Indiana Public Schools?
Next Post

January 13, 2012 Who is Responsible for Christian Anti-Evolutionism?
Recent Comments
2 Comments | Leave a Comment
"Thank you, Dr. McGrath, I appreciate your opinion and support. I believe in treating people ..."
gloriamarie Q Coup Take 2?
"I am referring to the judgement of historians and other scholars of ancient literature, all ..."
James F. McGrath Tampering with the Words of the ..."
"Because you replied so graciously to a malicious internet commenter I will leave their comment ..."
James F. McGrath Q Coup Take 2?
"I meant "tripling." Thank you for point out my typo. I have a Benign Essential ..."
gloriamarie Q Coup Take 2?
Browse Our Archives
get the latest from
Religion Prof: The Blog of James F. McGrath
Sign up for our newsletter
POPULAR AT PATHEOS Progressive Christian
1