” marked the beginning of the era of the Fifth Doctor, played by Peter Davison, until then the youngest actor to have played the role. The actor, writers, and the show itself had their work cut out for them. Tom Baker had occupied the role for longer than anyone previously or since, a total of seven seasons spanning the whole or part of eight calendar years, from 1974-1981. Even today, for many his Doctor is still the Doctor, the one that everyone thinks of, at least where the classic series is concerned. Peter Davison’s Doctor was the first I ever saw, and so the hurdle wasn’t there for me. I can only imagine how challenging it must have been to take up the mantle at this particular juncture. 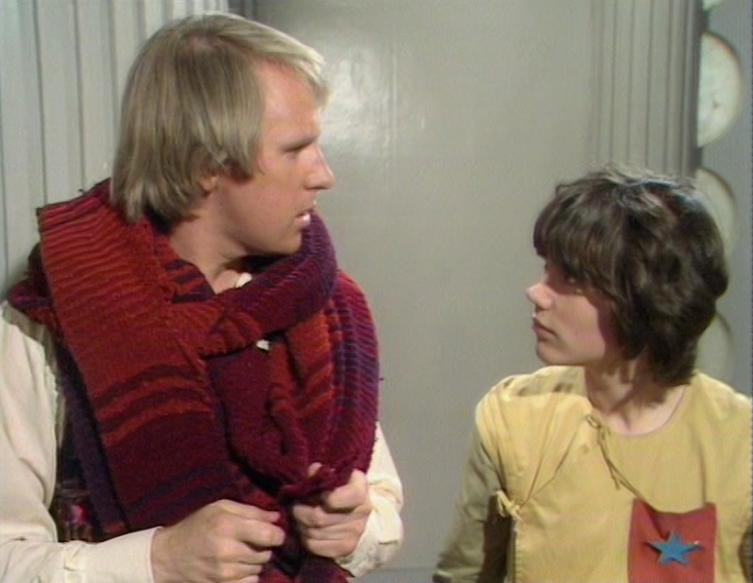 The writers took a path that the show would revisit in transitioning from Christopher Eccleston’s Doctor to David Tennant’s, another case of a particular actor being the only Doctor viewers (in this case newcomers to the show) had ever known: they offered an episode during most of which the Doctor’s regeneration is not going well, and so he is either unconscious or not quite himself for much of it. The effect is to create a great sense of anticipation – the Doctor as we knew him has gone, and we approach the new with curiosity, eagerness, and skepticism. And so making us wait, anticipate the new persona, probably does much to aid the transition process.

The writers also drew on the first regeneration, after which the Doctor had a brief period of not being quite sure that he himself was in fact the Doctor. And there is also Davison’s impersonation of his predecessors which many likewise find impressive.

In a brilliantly powerful symbolic gesture, the writers also had the Doctor unravel the characteristic scarf of his predecessor, using it to help his companions find him and then find their way back to the console room. He also tears up his waistcoat on the way – and of course, finds the cricketer’s outfit that would be his characteristic clothing.

Apart from the storyline surrounding the Doctor’s regeneration and its teetering on the brink between success and failure, there is also an interesting element related to invented history. The place to which the Doctor is brought, Castrovalva, turns out to be a trap of the Master’s. By secretly entering the place into the TARDIS databanks, and forging volumes’ worth of history of Castrovalva, the Master created a place of refuge that seemed authentic. But on closer inspection, its characteristics as a late forgery were exposed – as for instance in its 500 year old books of history which nevertheless chronicled the place’s history down to the present day.

Such features – alleged antiquity combined with accurate knowledge of things after their time – are also clues historians use in real life to detect forgeries and pseudepigrapha.

The Doctor also nicely uses someone’s circular argument as an illustration of the recursion that is also physically and temporally present in Castrovalva. (The name of the city comes from an Escher painting, and this is no coincidence.)

There is little direct mention of religion, other than at one point when one of the Castrovalvans says, “Mergrave has devised a new religion he calls exercise.” This is a comment explaining their practice of hunting in tribal costumes which do not convey an accurate impression of their society. Other significant moments of religious or philosophical interest are when the Doctor says that “I think it does us good to be reminded the universe isn’t entirely peopled with nasty creatures out for themselves” and when one of the Castrovalvans says to the Master, “You made us, man of evil, but we are free,” and then gives his life to save the Doctor and Adric.

By the end of the episode, the Doctor (having previously corrected his statement “I feel like my old self again” by adding “Well, like my new self”) says the same once again, this time correcting himself by adding, “Well, whoever I feel like, it’s absolutely splendid.”

February 23, 2012 Scholars and Apologists
Recent Comments
0 | Leave a Comment
Browse Our Archives
get the latest from
Religion Prof: The Blog of James F. McGrath
Sign up for our newsletter
POPULAR AT PATHEOS Progressive Christian
1