Ten Really Bad Reasons to Believe in a Historical Adam

Someone drew my attention to a post at the blog The Gospel Coalition written by Kevin DeYoung, entitled “10 Reasons to Believe in a Historical Adam.” Since the reasons are not good ones, I thought I would quote them and then comment on them briefly.

1. The Bible does not put an artificial wedge between history and theology. Of course, Genesis is not a history textbook or a science textbook, but that if far from saying we ought to separate the theological wheat from the historical chaff. Such a division owes to the Enlightenment more than the Bible.

It is all well and good to blame things on the Enlightenment. But the truth is that if we are to ask historical or scientific questions, we need to have methods and tools for answering them. Science raised issues for geocentrism, and more recently with a historical Adam, and in neither case can one simply argue that one must keep the Bible and science or the Bible and history in apparent harmony, regardless of the evidence. If one sacrifices the Bible’s teaching about truth and honesty in order to defend the factuality of some of its stories, has one really defended the Bible in any meaningful sense?

2. The biblical story of creation is meant to supplant other ancient creation stories more than imitate them. Moses wants to show God’s people “this is how things really happened.” The Pentateuch is full of warnings against compromise with the pagan culture. It would be surprising, then, for Genesis to start with one more mythical account of creation like the rest of the ANE.

The attribution of the Genesis creation story to Moses is silly, and only possible if one ignores what Genesis actually contains. The attempt to read the author’s mind on the assumption that he is Moses is even sillier. There is also a profound irony in considering points 1 and 2 in relation to one another, since the conviction that Genesis cannot be an ancient Near Eastern mythical creation account actually reflects the concerns of the Enlightenment and not the concerns of ancient Israelites.

3. The opening chapters of Genesis are stylized, but they show no signs of being poetry. Compare Genesis 1 with Psalm 104, for example, and you’ll see how different these texts are. It’s simply not accurate to call Genesis poetry. And even if it were, who says poetry has to be less historically accurate?

To call Genesis 1 poetry is certainly an oversimplification, but it does have structure and parallelism which provide internal indicators that its order is about something other than chronology. But even if it is not poetry, who says that prose has to be more historically or scientifically accurate?

4. This is a seamless strand of history from Adam in Genesis 2 to Abraham in Genesis 12. You can’t set Genesis 1-11 aside as prehistory, not in the sense of being less than historically true as we normally understand those terms. Moses deliberately connects Abram with all the history that comes before him, all the way back to Adam and Eve in the garden.

Ancient literature connects historical figures with prehistorical ones all the time. It is once again modern, post-Enlightenment fundamentalists who say that one cannot do this, seeking to impose their concerns on ancient literature. In the New Testament, two genealogies which do not agree with one another and which selectively omit generations connect Jesus with David, Abraham, and Adam. They provide further confirmation that ancient genealogies do not make the sorts of points or always provide the sorts of historical information that modern readers desire from them.

5. The genealogies in 1 Chronicles 1 and Luke 3 treat Adam as historical.

So what? Genesis 1 treats a dome over the Earth as real. Matthew treats a mountain from which one can see all the kingdoms of the Earth as real. The Bible contains material that does not meet our standards of scientific or historical accuracy, and some of it clearly does not even come close to doing so. By simply pointing to some ancient authors and showing that they shared certain assumptions does not get one any closer to determining whether those assumptions are correct or erroneous.

So here we have the crux of the matter: an unwillingness to accept the Bible’s teaching on human fallibility, or Paul’s own protestation that at times he wrote as a fool.  The fundamental issue is the idolatrous insistence that the Bible’s authors actually shared God’s own attributes such as inerrancy.

Once again, what ancient people assumed or believed is not the issue. The issue is whether we can agree with them, based on the information available to us, much of which was not available to them. We do not determine truth by looking for the consensus of ancient peoples. What do you think the Christian stance on slavery would be if one took this approach?

8. Without a common descent we lose any firm basis for believing that all people regardless of race or ethnicity have the same nature, the same inherent dignity, the same image of God, the same sin problem, and that despite our divisions we are all part of the same family coming from the same parents.

No, at least in the form in which this is articulated. Common descent is a well-established scientific conclusion, and so we can make the same point by way of the human genome project. (Ironically, some fundamentalists adamantly deny the scientific basis for this conclusion and deny the scientific conclusion of common ancestry, since it shows that we are related more than to just each other as human beings). On the other hand, people who allegedly adhered to the teaching of Genesis have engaged in slavery, discrimination, and other sorts of racial hatred. And so Genesis is neither necessary for belief in human equality and dignity nor a guarantee that people will adhere to such lofty principles.

9. Without a historical Adam, Paul’s doctrine of original sin and guilt does not hold together.

The very terminology of “original sin” itself reflects a theological construction which uses but goes beyond Paul. But if what is meant is the pervasiveness and universality of human nature with all its flaws, then that is something that one can establish through simple observation – and account for in terms of evolution, biology, and psychology. There is no need for a particular mythical explanation in order to view humanity in this way.

10. Without a historical Adam, Paul’s doctrine of the second Adam does not hold together.

Sure it does, or at least, it does every bit as much as any other doctrine or bit of symbolism that has to be rethought in light of new information or changing context. Paul’s point is not about us being descended from Jesus rather than Adam. Being “in Adam” vs. being “in Christ” is about two different ways of being human and relating to God. To treat it otherwise is to create a hodge-podge of Pauline theology and later scientific information. Paul’s Adam-Christ contrast is based on Jesus, and could easily have been otherwise, had his belief about what God had done to bring salvation differed. If God had sent two saviors, it would have been easy for him to turn to Genesis and say “Just as through two human beings sin entered the world…” If God had sent successive generations of redeemers, Paul could have easily said, “Just as through multiple generations of human existence sin entered the world…” The contrast makes a theological point in a particular way because of Paul’s view of Jesus. The Adam side could easily have differed. And the symbolism of humanity being a certain, expressed through story, way does not automatically become less meaningful simply because we understand the actual course of history of life on this planet differently.

The author of the blog post, Kevin DeYoung concludes by saying, among other things, that “Christians may disagree on the age of the earth, but whether Adam ever existed is a gospel issue.” Perhaps I should agree: it is indeed a “gospel issue” whether one is going to allow the Gospel to find expression for our time in the way that it has done throughout history, or is going to place a stumbling block between the people of today, with their scientific knowledge about human origins, and the challenge of the Gospel. Fundamentalists, as always, set themselves up as the defenders of the gospel, while in fact their very stance and their claims represent distractions from it in the best of cases, and in the worst and most egregious instances, actually undermine the gospel.

February 8, 2012 Doctor Who: The Macra Terror
Recent Comments
62 Comments | Leave a Comment
Browse Our Archives
get the latest from
Religion Prof: The Blog of James F. McGrath
Sign up for our newsletter
POPULAR AT PATHEOS Progressive Christian
1 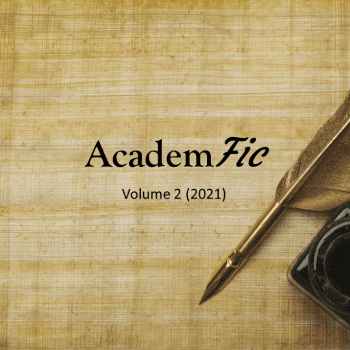 It’s All Common Grace
If one grew up in especially a Calvinist strain of fundamentalism/evangelicalism, they...
view all Progressive Christian blogs
What Are Your Thoughts?leave a comment
Copyright 2008-2021, Patheos. All rights reserved.
error: Content is protected !!