I found this online while looking for something else. It definitely sits at the intersection of religion and science fiction: 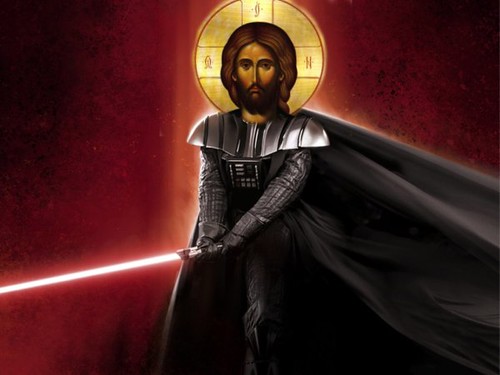 And now abideth anger, fear, aggression, these three; but the greatest of these is anger.

Darth Jesus can feel your anger. He wants to give you focus and make you stronger.

All Darth Jesus asks is that you strike him down with all of your hatred, and your journey toward his side will be complete.

Personally I find the merging of the images of Jesus Christ and Darth Vader more striking when considered in light of the full story of Star Wars. While the idea that one of Gnosticism’s defining features was a “redeemed redeemer” has been shown to be at odds with much of the textual evidence, that is in a very real sense what Anakin Skywalker is. He is the “chosen one” and gets caught up in the dark side, but in being redeemed through the help of his son Luke, he finds redemption and defeats evil.

Gnosticism may or may not generally be characterized by a redeemed redeemer, but Star Wars is.

If Jesus is viewed in a similar fashion, in the sense that he is not viewed as someone devoid of human frailty and sinfulness, but someone who shared in them and yet manages to overcome them in a fashion that moves from sharing in a culture of prejudice to opposing prejudice, and from shunning the impure and sinners to touching and dining with them, doesn’t that make Jesus a more impressive figure rather than less?

March 6, 2012 Doctor Who: The Chase
Recent Comments
1 Comment | Leave a Comment
"I wonder if the turkeys are thankful?"
John MacDonald Happy Thanksgiving!
"I just finished reading your book "What Jesus Learned from Women". Thanks so much for ..."
DurhamDave What Jesus Learned from Junia
"Mark S: "Similarly there is zero reason to say that there is a single 'strict ..."
robrecht Triangulating on John the Baptist from ..."
"Mark S: "You affirm again and again, in different ways, and groundlessly, the ecclesiastical position ..."
robrecht Triangulating on John the Baptist from ..."
Browse Our Archives
get the latest updates from
Religion Prof: The Blog of James F. McGrath
and the Patheos
Progressive Christian
Channel
POPULAR AT PATHEOS Progressive Christian
1

5 Books That Can Change Your...
All Set Free
Books by This Author Books by James F. McGrath