Doctor Who: The Chase 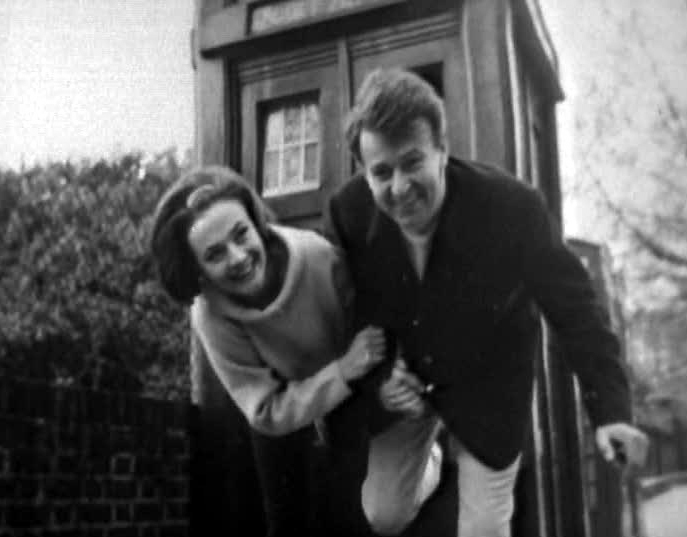 ” is the episode of Doctor Who which saw the departure of the remaining two of the original companions from the show’s beginning, Ian Chesterton and Barbara Wright. In a very real sense, they were the main characters of the show, and the Doctor was a mysterious figure who had whisked them away for interplanetary and time-traveling adventures.

Here’s a video clip of the farewell, when the Doctor reluctantly agrees to help Ian and Barbara use a Dalek time machine to get back to their own time and place.

Before that, however, the travelers find themselves on a pursuit through space and time with the Daleks close behind them. They land in some interesting places. One is atop the Empire State Building, where a stereotypically ridiculous American tourist from Alabama interacts with them, and Vicki mentions that she thought the building had been destroyed by the Daleks when they invaded – but which of course had not happened yet at this point in history. Another place they land is on a ship, where their Dalek pursuers later materialize, causing the crew to flee by jumping into the sea. The ship was the Mary Celeste. They also land in a place that seems like a nightmare, a spooky house where Count Dracula and Frankenstein’s monster exist. The Doctor suspects that they had somehow landed within a human mind – but in fact, they had landed in a futuristic house of horrors with androids there to frighten visitors when it is open.

The show would use a similar device again, once again in an episode involving fleeing from the Daleks, in “The Daleks’ Master Plan

” – that time even landing the travelers amid a Hollywood filming of the Keystone Cops!

The episode has a lot of humor, and even the adventure is lighthearted – excessively so at times. Ian, Vicky and Barbara seem to be having way too much fun for people supposedly fleeing for their lives from deadly Dalek pursuers. But of course, the fact that Doctor Who manages to be terrifying and comical is part of why so many people, including children watching between their fingers, persist in watching the show.

Among the more amusing moments are when Ian reads a book Monsters from Outer Space and finds it unrealistic, and when they use a sort of time TV to view moments in history – and Vicky expresses surprise that the Beatles, whom she had heard of, played classical music.

The episode ends with a sort of “machina ex deo” in the final part, as a group of robots sent from Earth to prepare the planet they’ve landed on for habitation battle the Daleks, while the travelers and newly introduced Steven Taylor make their getaway.

As pertains to religion and science fiction, the episode uses the time and space travelers to account for a spooky occurrence, while providing a perfectly rational explanation for another one even if the travelers themselves are unaware of it. And the Doctor says in response to the presence of lights leading to a cave on a planet seemingly devoid of intelligent life that “like everything else in the universe, there is a reason for it.” Is the conviction that everything in the universe has a reason for it something that can ever be based on evidence? Does it reflect a viewpoint of faith, even if a theistic deity is not part of the picture?