Demolishing and Reconstructing the Burial of Jesus (and Christianity Itself)

Sam Alexander has posted a review of my book The Burial of Jesus on his blog {Take and Read}. It is appreciative and yet asks some important questions, most pointedly, what comes after the sort of historical-critical demolition of widely held views, and of certainty in general.

What, in short, should Christianity look like in the aftermath of historical study?

There are those who resist historical criticism in a vain and misguided effort to keep their faith unaffected. It doesn’t work, and often leads to people losing later in life a faith that they could have understood in light of historical scholarship from their tween years if not sooner. On the other side of the spectrum, there are those who think that nothing worth speaking of is left of Christianity after historical-critical analysis has done its work.

But what about those of us who believe that there can be a post-critical and post-modern Christianity (by which I emphatically do not mean a Christianity that ignores earlier historical scholarship)?

My focus on the impact, achievements and limitations of historical study in The Burial of Jesus

reflects my own personal and professional journey. I studied the Bible academically as an expression of my faith. I initially joined in the attempts to resist “liberalism” and defend my faith while benefiting from a specifically evangelical and conservative form of such study. I eventually acknowledged that such study required me to rethink and change my beliefs. The Burial of Jesus

is essentially a book that publicly retraces my steps through that journey, in a manner that others can follow.

One reason why I didn’t focus too much on the reconstructive aspect of building a theology that takes historical criticism of the Bible seriously is because there are others whose work is in the realm of theology proper and who can arguably do a better job. My writing was sparked in part by the controversial headlines about the Talpiot tomb, and focused on my own area of expertise, historical-critical study of the Bible, and relating that to Christian faith.

Another reason is that there are quite a number of different ways that one could formulate a post-critical, post-modern approach to Christianity.

For me personally, being a Christian in light of historical criticism and other scholarly approaches means accepting a high degree of Christian agnosticism. There are things that we simply cannot know, and so we must learn to embrace doubt, not necessarily as an end, but at the very least as a means to exploring our faith and living it. It is crucial to move away from dogmatic certainty to humble service.

In doing so, we can continue to find meaning and inspiration in the traditions and stories of our faith. Everyone tells stories, and everyone has faith, with perhaps a very few exceptions. But most atheists, like most religious people, find ways of persuading themselves that life is worth living, that making the world a better place for future generations is worthwhile. None of that can be proven using scientific, historical, or any academic tools. It is a faith, a conviction.

On the one hand, leaving the matter of an afterlife in the realm of agnosticism, or of at best hope rather than certainty, is something that modern Christianity desperately needs. Many of today’s Christians are only motivated to help others because they believe it contributes to their eternal rewards, and many are demotivated from helping others whom they believe are destined anyway for eternal suffering. We are at a juncture at which progressive Christian voices need to challenge other Christians to genuine self-sacrifice and self-denial.

On the other hand, in the traditional Christian stories, embraced as mythical expressions of our values rather than literal statements of fact, we can find inspiration to value self-sacrifice and kindness rather than power and dominance. It is truly possible to find the former more fulfilling and more rewarding than the latter, and more of a reward than personal immortality.

In adjusting our Christian vision in this way, we are not setting aside the Christian faith. We are allowing some neglected elements of the Biblical tradition to come to the fore once again, and if necessary to displace other elements that had previously taken center stage.

If you are a Christian who embraces the historical-critical study of the Bible, and embraces scientific perspectives on other matters of importance such as the history of the universe and of life on this planet, what does Christianity look like to you in the light of such perspectives? What remains the same, and what changes? How minimal or radical are the revisions you consider appropriate? 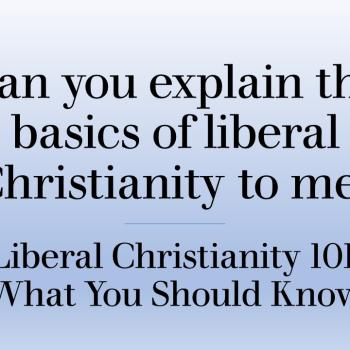 The Love and Justice of Advent (Part 3...
This concern for some people's material needs can evolve to include people...
view all Progressive Christian blogs
What Are Your Thoughts?leave a comment