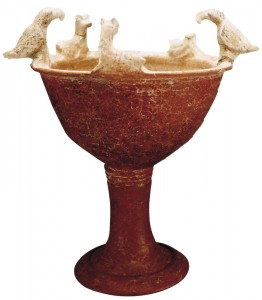 Strange winds are blowing in the field of Biblical Studies these days, and some of them involve clouds that carry no rain, and promise no lasting crops. What I am referring to is the growing trend to assume that you should be able to do a higher degree in the Bible without: 1) learning any of the Biblical languages, and 2) without learning the proper history of the Biblical cultures and times, and 3) without assuming that these ancient texts need to be studied in their original contexts, because, it is assumed, ‘meaning is in the eye of the beholder’.

The problem here is not just an anti-historical approach to the Biblical text, the problem is also an anti-linguistic, anti-contextual approach to the meaning of texts, and thus it involves epistemology, assumptions about how meaning is formed, and the like. These assumptions are seldom argued for, they are simply taken for granted, as if Stanley Fish wrote the Bible on meaning and texts and how they work (or don’t).

One manifestation of this proposed new model for studying the Bible could be called the purely literary approach. The Bible is literature, therefore we will read it in light of modern assumptions about, for example, fiction. Not mind you, ancient approaches to novels or histories or biographies, no modern approaches entailing modern theories of meaning. The Bible on this approach is treated as a document originally appearing in English and subject to the trends in analysis of modern English literature.

Of course it is possible to study the Bible like this, but whether it is an adequate means of studying the Bible if one wants to get at its meaning is another question altogether. If you do study it like this, then you should study it as a part of English literature and the development of the English language, which still will involve you in historical research, including research on the development of English. It’s just that now you are studying a different period of history, and a different language group.

Sometimes we encounter this same solipcism in the so called ‘inductive Bible study approach’ of some of our contemporaries who think that all you need to make sense of the Bible is a good English translation and a good concentrated inductive reading of it for yourself. This approach is sometimes coupled with the notion of ‘the individual right of interpretation’, though whoever came up with that notion doesn’t understand the collective nature of ancient texts and how meaning is culturally and contextually dependent.

In short, what the NT text meant in the first century A.D. is still what it means today. It may have differing applications and significances for individual readers today, but it does not have a different meaning.

Sometimes the anti-historical approach to the text surfaces in what is called ‘post-colonial readings’ of the Bible, where free reign is given to the reader to read into the Bible all sorts of current issues and concerns that the original Biblical writers would be very surprised to hear they were discussing. The epistemological assumptions behind the post-colonial readings are several: 1) we are all active readers, and therefore even if there is an ‘original meaning’ of the text we can’t get at it because we are just too locked into our own cultural context, viewpoint, and subjectivity. While I would grant that we are all active readers, and must take into account our personal biases and perspectives, it is not true either that texts do not have inherent meanings embedded in them or that with due diligence to the original contexts, including the original languages, we cannot get at that original meaning; 2) the second assumption is a natural corollary of the first, namely that studying ancient history, ancient languages, etc. is unnecessary to find a meaning in these texts, and so we are given permission to not have to do the hard historical homework required to properly understand them.

In some ways, this whole approach is about as arrogant as what you sometimes hear from fundamentalists who think that they are never guilty of anachronistic readings of the Bible, and that the Holy Spirit can show them the precise meaning of the text without any kind of language study. All they need is an infallible translation (preferrably the KJV in some form) and they are good to go. They too deny the need for any serious historical homework. My reply to the latter sort of student of the NT is ‘don’t use the Holy Spirit as a labor saving device. It’s a shame you are not giving the Holy Spirit more to work with’.

Having said all this, I do not deny that some post-colonial readings of the Bible have indeed showed us some of our blind spots in understanding the Biblical text. I do not deny either that Eurocentric readings of the text can sometimes impose later notions on the text which are not part of the meaning of the Biblical text. But just as we should guard against the anachronistic fallacy with Eurocentric or fundamentalist or charismatic readings of the text, so also we must guard against the imposing of ideas from the post-colonialists readings as well. The Bible is not, for example, a proto-Marxist manifesto, and Marxist readings of the text frequently skew rather than unveil what the text intends to say. I do not think it is a good use of the Bible to treat it as an inkblot into which one can read whatever modern agendas one has.

For more on what it takes to do justice to the meanings embedded in the Bible, see my Is There a Doctor in the House?. In my view there is no getting away from original language and context studies of the Bible if you want to understand its original inspired meanings.

March 16, 2012 Marked Messengers-- Angelloi in Mark Part Two
Browse Our Archives
get the latest updates from
The Bible and Culture
and the Patheos
Evangelical
Channel
POPULAR AT PATHEOS Evangelical
1