Doctor Who: The Abominable Snowmen

The classic episode from the Patrick Troughton era, “The Abominable Snowmen

,” is almost entirely lost. It is a pity, as it is an engaging episode with a convincing story and interesting exploration of religion. Doctor Who has had a longstanding affection for Buddhism, but in some respects “The Abominable Snowmen” offers a more explicitly positive presentation of the religion than even “Kinda” and “Snakedance.”

The episode witnesses the Doctor and his companions Jamie and Victoria arriving in Tibet. The Doctor digs out a sacred bell, the ghanta, which we later learn had been entrusted to him on a previous visit to the monastery that features in the episode.

The characters in the episode – apart from the Doctor and his companions and an English anthropologist Travers – are monks and warriors who protect the monastery. The master lama, whose name is Padmasambhava, had met the Doctor on his previous visit. We learn over the course of the episode that he has traveled on the astral plane, where he made contact with “The Great Intelligence” – apparently a “spirit” being, or better an astral one, which has enabled Padmasambhava to construct robots before their time, and has a plan aimed at allowing The Great Intelligence to take physical form on Earth. 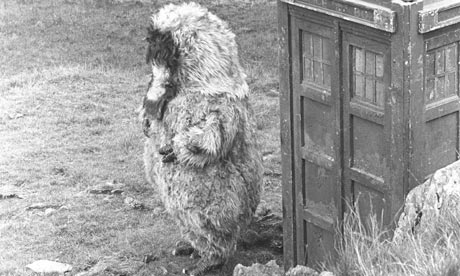 As in “Marco Polo,” so too in this episode Buddhism seems able to accomplish things that advanced technology can. Long life, contact with alien worlds and beings, learning to build advanced mechanical devices, and more.

Of course, those who view Buddhism negatively, e.g. from the perspective of conservative Christianity, might view the possession of Padmasambhava by The Great Intelligence as in effect saying that dabbling in the spirit world opens one up to demon possession. Even from a more neutral standpoint, there is surely an indication that astral exploration is dangerous. But so too, after all, is the Doctor’s traveling through time and space using scientific means.

Prayer plays an interesting role in the final part of the episode. On the one hand, the Doctor uses (and has Victoria taught to use) the “Jewel of the Lotus Prayer” as a means of resisting hypnotism. It is quite something to hear the Doctor chanting “Om mane padme hum.” On the other hand, when the monks promise to pray for the Doctor, he simply says “thank you” without criticism or casting aspersions on such practices as superstition.

Other aspects of religion come up in the course of the episode, in discussions of the relative merits of meditation vs. action, and the advantages and disadvantages of obedience vs. questioning authority.

As The Great Intelligence was described as trying to take on physical form in a glowing mass flowing from a cave at the top of a mountain, I wondered whether there was an intentional allusion to theophanies from the Biblical tradition, such as God appearing in fire on Mt. Sinai.

This is a great episode, and I thoroughly enjoyed it as an audiobook. Is there anyone out there who remembers actually seeing it on TV?

March 3, 2012 Does Reading the Bible Lead to Atheism? Does Losing Faith Save one from Fundamentalism?
Recent Comments
6 Comments | Leave a Comment
"lol you're one sick puppy get back to avant garde highly morally-motivated anti-imperialist zionology https://www.marxists.org/su... ..."
Mark S “To Your Tents, O Israel!” A ..."
"It is hard to take comments like this seriously. I've provided countless surveys of key ..."
James F. McGrath Five Reasons Why Mythicism is Disappointing
"Nope, not even close. Your comments have shown you don’t understand the translation issue being ..."
James F. McGrath “To Your Tents, O Israel!” A ..."
"According to John, it's all to do with theology. John 6 - After Jesus says ..."
Bones “To Your Tents, O Israel!” A ..."
Browse Our Archives
get the latest from
Religion Prof: The Blog of James F. McGrath
Sign up for our newsletter
POPULAR AT PATHEOS Progressive Christian
1