Does Reading the Bible Lead to Atheism? Does Losing Faith Save one from Fundamentalism?

Does Reading the Bible Lead to Atheism? Does Losing Faith Save one from Fundamentalism? March 3, 2012 James F. McGrath

Hemant Mehta shared this cartoon about the year after the “Year of the Bible” in Pennsylvania: 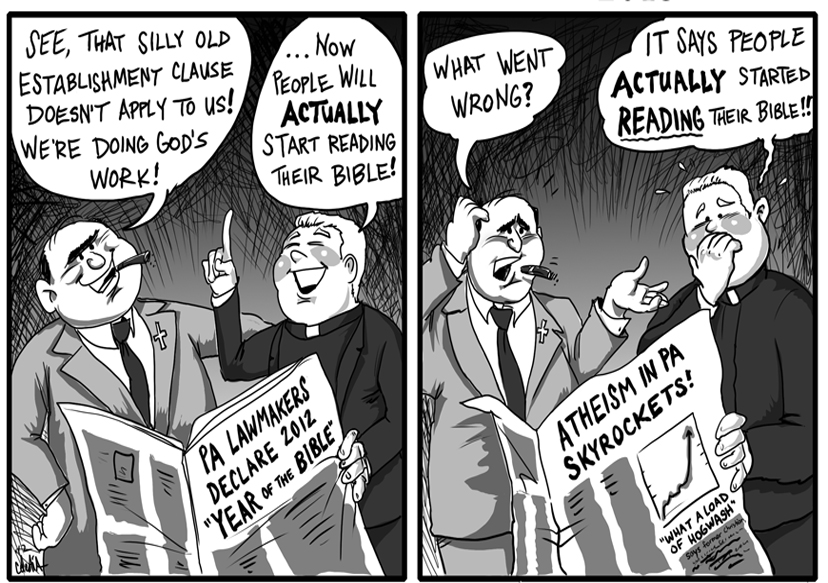 Reading the Bible can indeed lead to people losing their faith, if their faith was placed in the Bible, which they believed to be inerrant.

But that is only a natural (or perhaps nearly inevitable) outcome if one has accepted the aforementioned view of the Bible, and placed one’s faith in the Bible, allowing it to become the foundation for one’s faith, despite the Bible’s own insistence that one’s foundation should be elsewhere. If one has been foolish enough to adopt a view of the Bible that one has to defend against evidence from within the Bible itself, then perhaps it is only fair that one’s entire misguided worldview come crashing down at some point. But what remains or is rebuilt from the rubble is often not a significant improvement on what was there before.

It is not merely the combination of wrong beliefs about the Bible, subsequently confronted with evidence from the Bible itself that those beliefs are wrong, that lead to a loss of faith. It is also having one’s faith almost entirely focused on and dependent on the Bible. If there is nothing beyond the Bible that constitutes your “faith,” then when that is taken away as an infallible authority, then obviously nothing remains of one’s faith.

If, on the other hand, there is more to someone’s faith than inerrant authorities – whether texts, creeds, dogmas, people, or a particular philosophy – then that can often constitute a faith that can survive and thrive as one’s beliefs change. You may or may not still think that what is the ultimate reality is helpfully depicted in personal terms. But you may be able to hang on to faith in the meaningfulness of life, the value of persons, the dangers of reductionism, and much else that, call it what you will, is part of the essence of faith for many whose worldview, whether theistic, pantheistic, polytheistic, panentheistic, atheistic or agnostic, is more than just the sum of their beliefs about religion.

What do readers think? Did your discovery that the Bible is not inerrant lead to a loss of faith for you? Or did your beliefs change, while your “faith” (or whatever you may prefer to call it) grew, evolved, developed and changed in ways that you consider ultimately positive? Please share your own thoughts and experiences!

March 3, 2012 Doubt Consolidation
Recent Comments
27 Comments | Leave a Comment
Browse Our Archives
get the latest from
Religion Prof: The Blog of James F. McGrath
Sign up for our newsletter
POPULAR AT PATHEOS Progressive Christian
1

Letting Love In: Part 1-Love Finds Us
This week, I'll be taking a look at how the love of...
view all Progressive Christian blogs
What Are Your Thoughts?leave a comment
Copyright 2008-2020, Patheos. All rights reserved.