Doctor Who: Trial of a Time Lord: Mindwarp

” are known by the subtitle “Mindwarp

.” This segment is powerful inasmuch as it makes us really wonder about the Doctor’s sanity and stability, and later, about Peri’s fate. Having coped with the Doctor’s instability early in the Sixth Doctor’s tenure, and finally begun to relax as the Doctor settled into a somewhat abrasive but highly authentic version of himself reminiscent of the First Doctor, it was somewhat disturbing to see the Doctor seeming to have lost himself and gone over to the dark side, returning to his old self too late to save his companion Peri.

Although hints have been raised that the matrix, the computer that compiles all Gallifreyan knowledge allowing us to watch along with those at the Doctor’s trial, may in fact not be as incapable of lying or being manipulated as time lords believe, viewing the Doctor behaving in this way still causes some consternation. When we think of the Second Doctor’s temporary transformation in “The Two Doctors,” it seems as though a theme of the Sixth Doctor’s tenure is to emphasize that the Doctor is not invincible, invulnerable, or incapable of being hijacked or corrupted.

Of course, if we think back to the first episode of Doctor Who, it might have been said that the Doctor was initially the villain of the series – a mysterious alien figure who essentially kidnaps humans rather than allow his secret to become known. So a Doctor who is at best fallible is not a radical departure from the show’s roots, even if it is a departure from much of the show’s subsequent history.

A key overarching question that bookends this segment is who has the right to meddle in history and the affairs of planets and their inhabitants. The Doctor will accuse the time lords of having taken it upon themselves “to act like second-rate gods.” That the Doctor is accused of interfering and meddling by time lords becomes ironic as we see them doing so in much more drastic fashion, with at least as deadly results as in the case of the Doctor’s interventions. 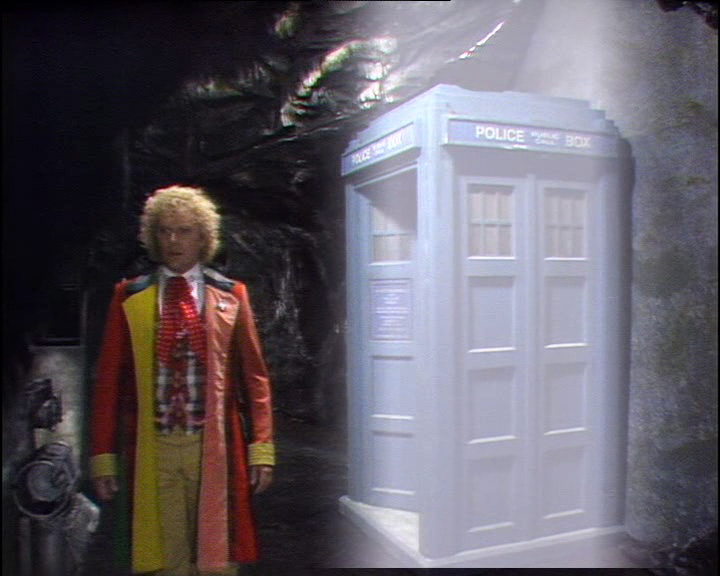 Religious themes are present in the self-interested prayers Sil offers, and in king Yrcanos’ vision of an afterlife involving reincarnation and eventually reaching the realm of the gods. They are also present in the discussion of love, defined by Peri as caring for someone else more than for oneself, more than for one’s own life. And they are there in the technological pursuits of Dr. Crozier, which would allow a mind to be transferred from one body to another, essentially overcoming death. It is this last development which would so change the course of the evolution of life in the universe that leads the time lords to intervene.

The episode has some weak points (the depiction of Yrcanos the warrior-king comes across as at best a caricature) but also some great ones. I think my favorite line of dialogue is when the Doctor says “If I stopped to question the wisdom of my actions, I should never have left Gallifrey.”

There is a list of stupid and cool things about “The Trial of a Time Lord” online, and so here is a link to a condensed selection from that list.

March 2, 2012
Was Thaddaeus Jesus' Original Drummer, or his Secretary of Housing and Urban Development?
Next Post

March 2, 2012 "Forget Jesus" - Controversy at the Intersection of Miley Cyrus, Lawrence Krauss, Christianity, Atheism, Physics, Astronomy and Cosmology
Recent Comments
0 | Leave a Comment
"Yes, of the tribes other than Judah, Benjamin is the one that is likely to ..."
James F. McGrath “To Your Tents, O Israel!” A ..."
"Lol Candace Owens....Candace Owens is a wingnut commentator and rising airhead of the young conservative ..."
Bones Understanding Whiteness
"Is this about Jesus or Dr King? I'm confused."
Robert Limb Historical Jesus Comparisons
"You have provided no basis for your assertions. Until you do my post from real ..."
Bob Shiloh Understanding Whiteness
Browse Our Archives
get the latest from
Religion Prof: The Blog of James F. McGrath
Sign up for our newsletter
POPULAR AT PATHEOS Progressive Christian
1