Was Thaddaeus Jesus’ Original Drummer, or his Secretary of Housing and Urban Development?

In my historical Jesus class yesterday, one of the topics was the twelve apostles. When the fact came up that there are discrepancies between the names listed in various Gospels, I suggested that one explanation might be comparable to the bands many of us love, but from which we can name the lead singer and lead guitarist, but are prone to get stuck on the others.

The band analogy also brings to mind the possibility of a change of lineup. I actually went to college with a fantastic drummer who was in a band in his school years. Eventually the band split to form two separate bands. One of them became Genesis. The other…well, let’s just say it didn’t.

Could the “lineup” of the Twelve Apostles have changed over time?

In the class discussion, a student also mentioned as a possible comparison to the first scenario the situation of governments, in which people know the names of the president, vice president, and Secretary of State, but are liable to forget the name of the Secretary of Housing and Urban Development. 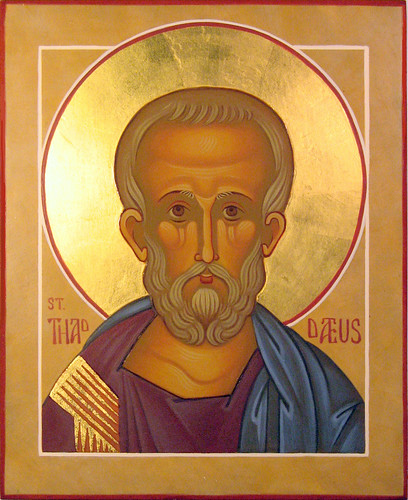 That led to some reflection on whether the Twelve could indeed have been Jesus’ “cabinet.” The saying about them sitting on twelve thrones judging the twelve tribes of Israel is likely to be authentic, since it would probably not have been invented after Judas came to be viewed as a traitor and apostate – who would have made Jesus predict that he would occupy one of the twelve thrones after that? The saying, taken on its own, is compatible both with an apocalyptic view in which God was expected to install Jesus as Messiah and his representatives as judges/emissaries, and also with an expectation that they would set up a government and take control. And so this saying illustrates well why individual sayings, taken in isolation, cannot serve as a sound basis for reconstructing the historical figure of Jesus, without taking seriously the gist of our earliest sources as well, as Dale Allison has helpfully emphasized.

So which analogy seems most apt to you, or do you think the individuals whose names appear on some lists of apostles but not others ought to be accounted for in some other way? Was Thaddaeus the original drummer for “Jesus and the Twelve Apostles,” or Jesus’ Secretary of Housing and Urban Development, or just a guy whose name was hard to remember, a bit like…what’s his name?

March 2, 2012 Doctor Who: Trial of a Time Lord: Mindwarp
Recent Comments
7 Comments | Leave a Comment
Browse Our Archives
get the latest from
Religion Prof: The Blog of James F. McGrath
Sign up for our newsletter
POPULAR AT PATHEOS Progressive Christian
1