Doctor Who: The Ambassadors of Death

Doctor Who: The Ambassadors of Death July 3, 2012 James F. McGrath

The episode “The Ambassadors of Death” has as its downside something characteristic of a great many Doctor Who episodes, and arguably of the entire phenomenon of LOST: a suspense-filled and intriguing premise is eventually resolved in a manner that doesn’t live up to the build-up. Nevertheless, the premise and the exploration of it is itself enjoyable, and the episode has some truly fantastic moments. For those who have only seen the newer seasons, it has elements which one can only assume inspired, even if only subconsciously, key elements from the last season, starting with “The Impossible Astronaut.”

The Doctor even gets to go into space using more primitive human technology. 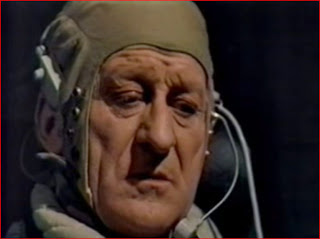 The episode raises some interesting questions which become characteristic of the Pertwee era. The final episode with Patrick Troughton, “The War Games,” suggested that human beings were the most brutal species in the galaxy. In “The Silurians” the Doctor had many criticisms to offer of the approach of the military to the unknown. Here in “The Ambassadors of Death,” the Doctor will find a manner of dealing with relations that might seem to have no hope of anything but out and out conflict. Issues of war and peace are to the fore throughout the Pertwee era. But if the actions and attitudes of the military are often one-dimensional, there is still something impressive about the Doctor’s not only willingness but insistence on and ability to see beyond such simple solutions to the possibility of dialogue and of peace.

If one wishes to connect these episodes with something in the newer seasons, it would probably be “The Beast Below” where, prodded by the Doctor to do precisely what we just described – look beneath the surface and see what’s really going on at a more fundamental level, Amy sees a way to a more satisfactory resolution when confronted with conundrums involving profound injustice, human survival, and a seemingly insoluble situation.

Perhaps, to put it in broader science fiction terms, the ultimate theme of Doctor Who is “There is no Kobayashi Maru – no such thing as a no-win situation.” And perhaps the message is that, while that may or may not be factually true, it is better to live as though it is.