First, let’s make sure that the president of the United States is quoted correctly and in full (unlike in Bristol Palin’s recent blog post and so many similar corners of the internet): 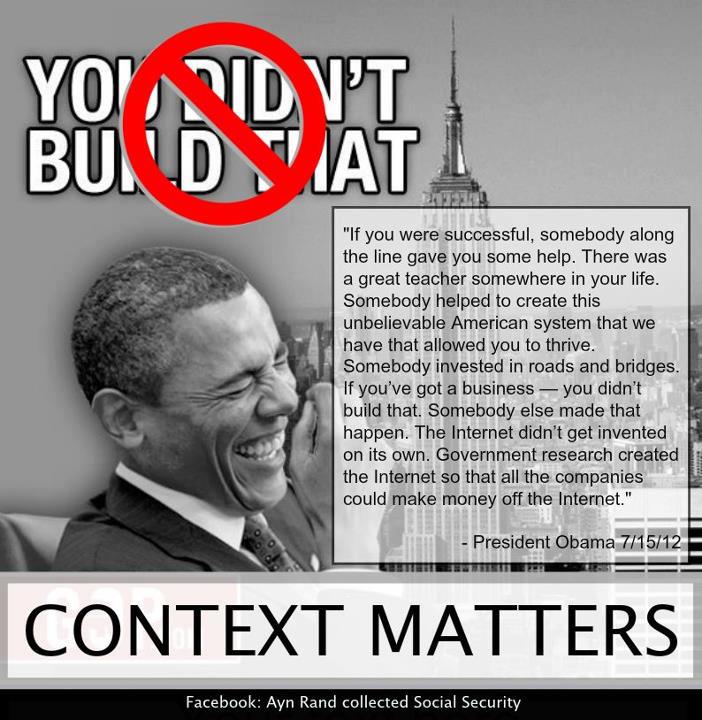 Now, some thoughts relating to those who have been complaining about what the president said. I can see how all sorts of arrogant and prideful people could complain, but I honestly don’t see how anyone who is a Christian, and grasps even superficially what the Bible says, could do so. The Bible has a strong emphasis on our dependence on God and upon other human beings. (How Protestants whose central emphasis includes phrases like “not of works, lest anyone should boast” can view life as an individualistic meritocracy is particularly puzzling, but perhaps a separate issue.)

Read some of the psalms which cry out to God on behalf of those oppressed by the wealthy – like Psalm 10, and perhaps even more directly relevant, Psalm 49:

People, despite their wealth, do not endure;

This is the fate of those who trust in themselves,

and of their followers, who approve their sayings.

They are like sheep and are destined to die;

death will be their shepherd

(but the upright will prevail over them in the morning).

Their forms will decay in the grave,

far from their princely mansions.

But God will redeem me from the realm of the dead;

he will surely take me to himself.

Do not be overawed when others grow rich,

when the splendor of their houses increases;

for they will take nothing with them when they die,

their splendor will not descend with them.

Though while they live they count themselves blessed—

and people praise you when you prosper—

they will join those who have gone before them,

who will never again see the light of life.

People who have wealth but lack understanding

Look at the prophets’ words, decrying those who enrich themselves at the expense of the poor, in passages like Isaiah 5:8 or most of the Book of Amos.

Look at the laws the ancient Israelites made (or, if you prefer, which God gave them), prohibiting them from charging interest or being able to buy or sell land for more than a generation before it returned to its original owner. And while Americans are used to reading the Bible as writings for each individual to do with as they see fit, laws like those in Leviticus 25 were given to the nation and were implemented collectively, including through taxes. Those laws say things like:

Those on the right wing economically and politically object to trying to offer a minimum of equity in health care, and yet the law of the land found in the Bible would make it illegal to make any profit from the sale of food to the poor! I can’t see Americans – even those who say they value the Bible – going for that one.

And so when Proverbs 29:7 says “The righteous care about justice for the poor, but the wicked have no such concern,” some people are picking a side which is incompatible with the claim to be Christian – unless they think that calling oneself a Christian while being deliberately and unrepentantly wicked is OK.

But some of the most relevant words for those who found the president’s point objectionable appear in the Book of Revelation. First, in the words addressed to the church in Laodicea, there is the accusation against those who considered themselves rich and thought that they have no need of anything or anyone (Revelation 3:17). But even more striking is Revelation 18, which depicts the downfall or “Babylon the Harlot” – i.e. the Roman empire. The downfall of Rome is mourned by merchants and those who work in transportation in particular:

The merchants of the earth will weep and mourn over her because no one buys their cargoes anymore — cargoes of gold, silver, precious stones and pearls; fine linen, purple, silk and scarlet cloth; every sort of citron wood, and articles of every kind made of ivory, costly wood, bronze, iron and marble; cargoes of cinnamon and spice, of incense, myrrh and frankincense, of wine and olive oil, of fine flour and wheat; cattle and sheep; horses and carriages; and human beings sold as slaves.

They will say, ‘The fruit you longed for is gone from you. All your luxury and splendor have vanished, never to be recovered.’ The merchants who sold these things and gained their wealth from her will stand far off, terrified at her torment. They will weep and mourn and cry out:

and glittering with gold, precious stones and pearls!

In one hour such great wealth has been brought to ruin!’

Every sea captain, and all who travel by ship, the sailors, and all who earn their living from the sea, will stand far off. When they see the smoke of her burning, they will exclaim, ‘Was there ever a city like this great city ?’ They will throw dust on their heads, and with weeping and mourning cry out:

where all who had ships on the sea

became rich through her wealth!

In one hour she has been brought to ruin!’

To put it in modern terms, businesspeople mourn the downfall of what today would be their nation, because without it they lack customers for their goods, passengers and cargo for their ships.

In other words, if the nation fairs poorly, those who engage in commerce suffer.

Of course, some in our time have managed to amass such great wealth as to have no need of commerce to survive.

Of course, some have become so wealthy that they really don’t need to care whether they create jobs or not, whether the policies they advocate help the society and community of individuals on which they scarcely depend any longer. A complete collapse of the nation might bring about some discomforts, but they could easily relocate, and still obtain what they need.

In many respects the United States is not fundamentally different from the Roman Empire – particularly in terms of the enormous network of commerce that entwines and entangles us. No one achieves great success completely alone, do they?

But if we recognize our interdependence, and care about implementing justice for as many as possible, then we can choose to be less like the Roman Empire and more like the just and egalitarian society that the authors of the Bible envisaged.

What puzzles me, in all of this, is the way that Christians can jump on a political and economic bandwagon, engage in misrepresentation, oppose moves which, however flawed and imperfect, aim at addressing serious issues related to economic and social justice, and not realize that those actions are so profoundly at odds with so much of what the Bible says. And what also puzzles me is how not only they themselves, but also so many others who hear what they have to say, can still take seriously that these are the most faithful Christians out there, those who are the faithful defenders of the faith. They seem more like opponents trying to undermine it from within than adherents.

I say this as someone who knows he does not do everything that he possibly could to help address injustices and inequities in the world. I am not attacking those who fall shorts, who stumble, who fail to live up to the lofty and arguably unattainable principles that the Bible in its best passages sets before us and challenges us to put into practice. I am addressing those who claim to be Biblical and yet have no idea what the Bible says about these topics. I am addressing the problem of those who ignore or have chosen to deliberately set aside the Biblical principles highlighted in this post, and yet who claim nevertheless to be defending – rather than demeaning and undermining – the Christian faith and its Scriptures.

Let me leave you with a snippet from Isaiah 10: 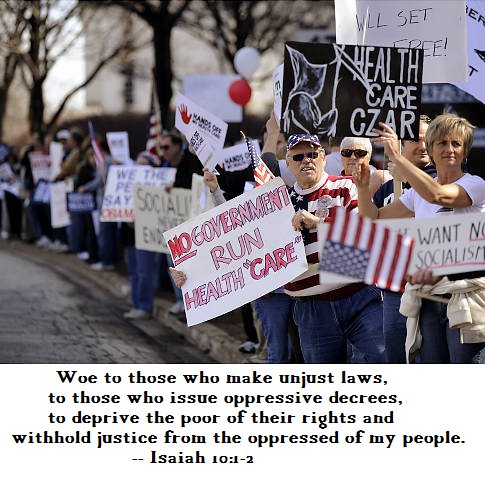 July 20, 2012 Review of Tim Stafford's Miracles
Recent Comments
21 Comments | Leave a Comment
"This seems a very strange comment, one offered as though completely unaware of things I’ve ..."
James F. McGrath Elephantine, Leontopolis, and Gnosticism
"This article includes one remark warrants emphasis. "...there’s much more to be done if this ..."
Dan G Elephantine, Leontopolis, and Gnosticism
"This is genuinely fascinating, but as an inveterate nerd, I must ask -- where's the ..."
Spirit Plumber Guest Lecture and Academic Minute on ..."
"Yes, I agree. Technical arguments which supposedly prove (or disprove) the Resurrection are a waste ..."
David M Copycat Anti-Religion
Browse Our Archives
Follow Us!