The Life and Teaching of John the Baptist according to the Mandaean Book of John July 26, 2012 James F. McGrath

Now that I have finished at least a still provisional but nevertheless complete translation of the chapters in the “Drasha d-Yahia” (which itself might be better rendered The Teaching of John rather than The Book of John) about the life and teaching of John the Baptist, I wanted to share links to them here. 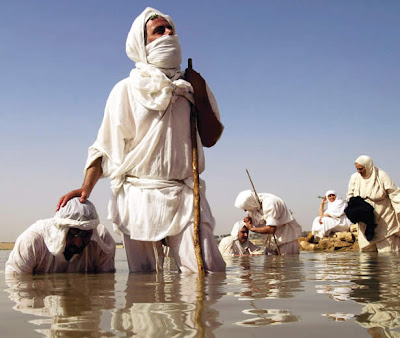 18. Portents of the Birth of John the Baptist

19. A Garment from the First Life

20. John Discusses Halos with the Sun

21. No One Compares to John

22. A Proclamation of War in the World

23. The Pitfall of Impure Women

24. More on the Pitfall of Impure Women

25. Sleeping in the Day of Judgment

26. Seeking a Garment of Eight

29. John Teaches on the Importance of Charity

30. Jesus Comes to John to be Baptized

Of related interest, I happened across the English translation of an Introduction to the New Testament by Johann David Michaelis on Google Books. As you will see if you click through, already in the late 18th century, there were those who were not only taking an interest in Mandaean sources, but who saw a relationship between them and the Gospel of John.

July 26, 2012 A Year of Living Justly?
Recent Comments
11 Comments | Leave a Comment
"Two years - 14 comments - 3 of them from the author; indicates the lack ..."
Bob Shiloh Can Fundamentalists Understand the Bible?
"There is no hint that Paul is talking about visions here. Do you mean other ..."
VinnyJH Was Paul Uninterested in the Historical ..."
"Exactly the point! James is saying that the bible is not made up of one ..."
KraigDeKompressorKruncha Can Fundamentalists Understand the Bible?
"In our formative years in the faith scripture is used to authenticate the person of ..."
Zeigler John Can Fundamentalists Understand the Bible?
Browse Our Archives
get the latest from
Religion Prof: The Blog of James F. McGrath
Sign up for our newsletter
POPULAR AT PATHEOS Progressive Christian
1