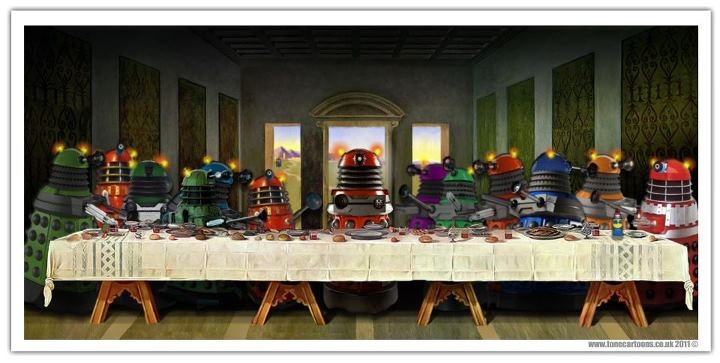 I've seen lots of science fiction versions of the Last Supper: LOST, Battlestar Galactica, Star Wars. But this one is new to me. I found it via The Daily Dalek on Facebook, which is also a new discovery for me.

Also for Doctor Who fans, IO9 had the latest Doctor Who news, with information (spoilers) about upcoming titles of Doctor Who episodes this season. This quote made me laugh:

Karen Gillan and Arthur Darvill's final episode is called “The Angels Take Manhattan” — which I hope starts a long and fruitful trend of naming episodes after Muppet movie titles, starting with “The Great Sontaran Caper” and rolling right along to “Cybermen Treasure Island.”

August 15, 2012
The New Testament: Uninterested in Homosexuality?
Next Post