The New Testament: Uninterested in Homosexuality?

I have found myself blogging on the topic of same-sex marriage and related subjects a lot lately. Perhaps I should try to take a more Biblical approach to the matter in the future – in other words, not talk about it much, if at all. 🙂

But perhaps I can use this opportunity to share one more thought on the subject. Among the Greeks and Romans, same-sex relationships between men were common, so much so that the entire Greek culture has been described as “bisexual,” while authors like Plato looked down upon “barbarians” who did not appreciate such relationships the way the Greeks did.

The question that does not get asked often enough is, if Paul, for instance, really had strong views on this subject, then why in his letters do we not have clear references, ones that actually use the unambiguous terminology current in the Greek language?

I also need to add an apology. I was, in a comment on John Byron’s blog, dismissive of a claim made in a recent article at The Huffington Post, which suggested that the Centurion’s “servant” (Matthew 8:6) was in fact his “lover” because that is what pais meant in ancient Greek. It turns out, according to Dover’s classic study, Greek Homosexuality, that the term pais was indeed widely used for the younger, passive partner in a same-sex relationship. Hopefully that will teach me to pronounce so quickly on a matter without looking into it adequately.

At any rate, the point is this: If Jesus cared about whether people were engaged in such activities, given how common they were among Greeks and Romans, he really missed a good opportunity to ask, and potentially offer a rebuke. I wonder how those who think the answer to “WWJD?” is “condemn homosexuals” will explain the fact that Jesus did not even bother to ask or address the issue, apparently missing an opportunity that his conservative followers today would not have passed up. 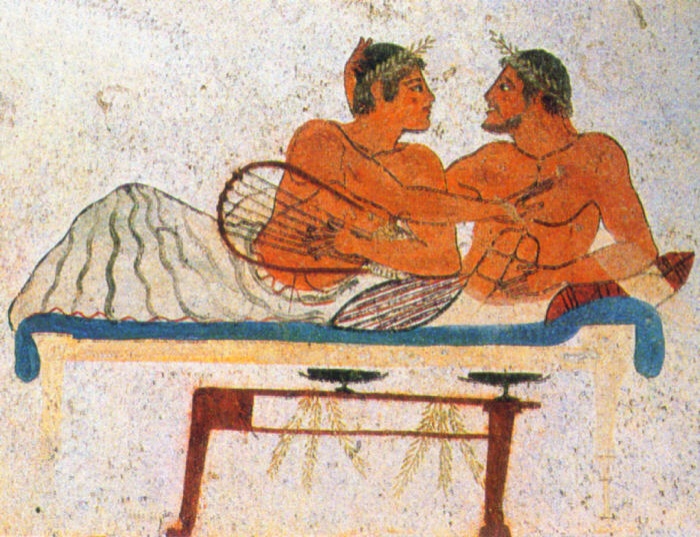 So too Paul. In his letters, he wrote to Gentile churches where it would be safe to assume that such relationships were a common part of their collective cultural experience and for many their personal experience, as part of a widely-accepted norm. Is it not to be expected that he would address this topic frequently and unambiguously if it were important to him? Are we really to believe that, in the time period that Paul interacted with Christians in Corinth, someone marrying his stepmother came up, but someone engaging in a same-sex relationship of a much more common sort never did? It is possible, to be sure – but is it likely? One could assume that Paul had “pray away the gay” sessions every time he planted a church among Gentiles, and thus he assumed that he had no need to mention the topic ever again. But is that a safe assumption?

And if Paul was genuinely concerned about the issue, why did he eschew all the terminology familiar to Greek speakers to denote those involved in such relationships in the various forms that they existed in ancient Greek culture? Why, in 1 Corinthians 6:9-10, did he choose a term that did not have a clear meaning, if he was referring to something familiar and about which clarity was possible?

This is not to say that Paul did not have a viewpoint on the subject. In the first chapter of Romans, perhaps the only unambiguous reference to same-sex relationships in the New Testament, it becomes clear that Paul assumed, as did many of his contemporaries, that there was something “unnatural” and “shameful” in at least certain same-sex relations. But what made them seem “unnatural” and “shameful” in that cultural context was the fact that men and women were assumed to be inherently different in status, one superior and one inferior, one by nature active and one by nature passive. For a man or a woman to transgress this supposedly natural gender role was considered unnatural and shameful. But we who do not share these assumptions about men and women cannot simply accept a view of same-sex relations built upon those assumptions.

Same-sex relationships in ancient Hellenistic society often involved a teacher and pupil or some other distance of status and power. They were not viewed as mutually exclusive to marrying someone of the opposite sex in order to produce legitimate heirs. And so they may have objected to them not least because they viewed them merely as forms of fornication and adultery. Their comments on same-sex relations in their time are not about the forms of relationships we are talking about in our time, any more than the Bible’s discussions of marriage envisage precisely the institution most of us are familiar with.

Be that as it may, it remains noteworthy that the one place where Paul seems to be explicitly referring to same-sex sexual relations, he brings it up in the service of luring conservative Jewish Christian readers into condemning such stereotypical Gentile practices, so that he can then turn their accusing fingers back on them. And so even if one were to conclude that Paul would have condemned today’s gays and lesbians, it would still remain the case that the conservative Christians of our time who read Romans have, for the most part, missed its point entirely.

That Paul and other NT authors say little about the subject in a world where it was more taken for granted than it is in our time tells us a great deal. This simply was not as important an issue for the NT authors as it is for contemporary conservative Christians. And in those few places where the subject seems to come up, what is said and what is not said both serve to remind us that the sorts of relationships that are in view are not those being discussed by advocates of same-sex marriage today.

And so perhaps the important question to be asked, which often fails to be asked explicitly, much less answered, is this: Given how little the Bible has to say about same-sex relationships of any sort, why is so much attention given to the issue by contemporary conservative Christians?

I think the answer, if I had to venture a guess, is this: Focusing on condemning gays and lesbians is just one more form of today’s conservative Christians condemning what seem like easy targets, so that they can persuade themselves that they are doing the Lord’s will and fighting evil, even though for the most part, they have little to say about and do little to address the most pernicious forms of evil and injustice in our time, subjects about which the Bible has much more to say, and much more explicitly and directly.

And so the heart of the matter, from a Christian and Biblical perspective, seems to be this: Today’s conservative Christians condemn and persecute gays and lesbians to make themselves feel better about their own serious shortcomings, leading to a self-righteousness that is thoroughly unbiblical, and according to the clearest New Testament passage mentioning homosexuality, in heaping such condemnation on gays and lesbians, they are really condemning themselves.

August 15, 2012 Dalek Last Supper
Recent Comments
69 Comments | Leave a Comment
"Under the old covenant (ten commandments), people were (and still are) racists and sexists. For ..."
Herrnhut Was Jesus a Racist?
"Reconciliation is a two-way street, restoring a broken relationship between two people. God does indeed ..."
Iain Lovejoy Forgive Us Our Debts, Not Repay ..."
"Excellent. God is not, and does not want to be, an accountant; keeping a ledger ..."
Harvey James Johnson Forgive Us Our Debts, Not Repay ..."
"Don't confuse forgiveness with reconciliation. Jesus tells us to forgive people who sin against us, ..."
Derek Thompson Forgive Us Our Debts, Not Repay ..."
Browse Our Archives
get the latest updates from
Religion Prof: The Blog of James F. McGrath
and the Patheos
Progressive Christian
Channel
POPULAR AT PATHEOS Progressive Christian
1