The Boston Globe has an article about the conversation among scholars about the fragment. Bart Ehrman is quoted as saying what many cautious scholars would say based on the currently-available evidence: “[T]he jury is out still, but it’s not looking good for authenticity.”

Andrew Bernhard posted another pdf article. In drawing my attention to it, he also wrote the following:

Just to clarify in case there has been any confusion, my goal in writing about a possible relationship between The Gospel of Jesus’ Wife (GJW) and The Gospel of Thomas (GTh) is not to establish that GJW <i>was</i> composed by copying words and short phrases from GTh. My interest is merely to examine whether a modern author with perhaps limited knowledge of Coptic <i>could</i> have used GTh to create a fragmentary text (such as GJW) that appeared to be of ancient origin. The answer appears to be, “yes.”

In a new article I have just posted on my web page (“On the Possible Relationship between The Gospel of Jesus’ Wife and The Gospel of Thomas”), I explain how virtually every line of the text of GJW could have been composed simply by juxtaposing words and phrases from the GTh. The only exception is line 6 on the recto of GJW, and I point out that those who would suggest that GJW is merely derived from GTh still need to explain how this line was compose. The article also includes a one page synopsis illustrating potential parallels, so that anyone can examine them quickly.

Ultimately, I am aware that there is a distinct difference between demonstrating that GJW <i>could</i> have been composed using GTh and that it actually </i>was. While I now believe that it is reasonable to be skeptical about the antiquity of GJW because a plausible explanation for how a modern author could have composed it has been offered up, I also think that it would be a mistake to conclude that the case is closed.

Additional experts need to examine the manuscript first-hand and the appropriate scientific tests need to be conducted to establish the age of both the papyrus and the ink. Karen King has always advocated further scrutiny of GJW, and I hope the process of peer review proceeds quickly and provides conclusive results about whether the papyrus and the controversial text it contains is genuinely ancient or not.

Christian Askeland has shared a video about peculiarities of the writing on the papyrus:

Alin Suciu and Hugo Lundhaug have posted some more thoughts about line 6.

Unreasonable Faith looks at how Christian fundamentalists have reacted to the news about the fragment.

Michael Kubin offers the complete text of the Gospel of Jesus’ Wife. And Reg Henry pokes fun by suggesting things that Jesus’ wife might have said.

September 27, 2012
The Doctor's View of Human Beings
Next Post

September 27, 2012 Timo S. Paananen on Methods of Forgery Detection and the Gospel of Jesus' Wife
Recent Comments
4 Comments | Leave a Comment
"Use Bayes’ Theorem to demonstrate that the use of Bayes’ Theorem in the study of ..."
James F. McGrath Review of Richard C. Carrier, Proving ..."
"Interesting review yet, quite flat and openly hypocritical. If one is going to critique a ..."
Jason Review of Richard C. Carrier, Proving ..."
"You have already been told that simply sharing a link with no comment relating it ..."
James F. McGrath Same-Sex Attraction, Mediterranean Culture, and Scripture
"Link: What does the Qur'an say about homosexuality? And what about the Bible?"
Amin - Same-Sex Attraction, Mediterranean Culture, and Scripture
Browse Our Archives
get the latest from
Religion Prof: The Blog of James F. McGrath
Sign up for our newsletter
POPULAR AT PATHEOS Progressive Christian
1 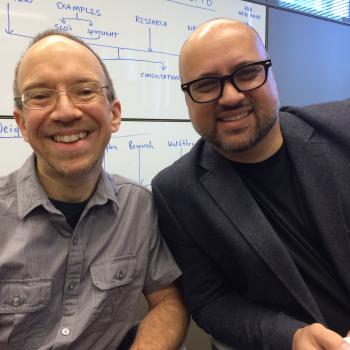 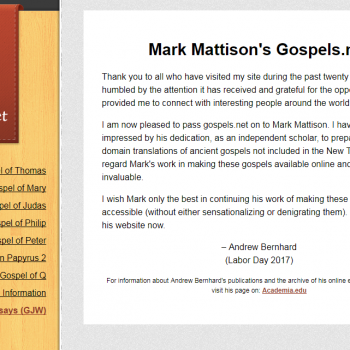 The Past, Present, and Future of Christianity in...
A reminder about my lecture this week, on April 15th, on the...
view all Progressive Christian blogs
What Are Your Thoughts?leave a comment
Copyright 2008-2021, Patheos. All rights reserved.