Nicholas Cage to Star in Left Behind Reboot 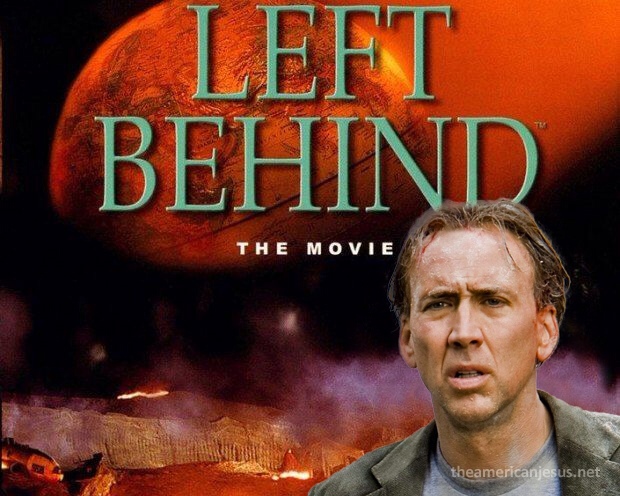 I had to make the time to post about this bit of news that several other blogs have already mentioned (including American Jesus, Slacktivist, John Byron and Joel Watts).

Nicholas Cage is interested in starring in a reboot of Left Behind.

Most people seem to be excited about the combination of Nicholas Cage and Left Behind. But what really gets me excited and my mind racing is the word reboot. That term has never meant simply a “remake,” but a invention that tries to update and improve on the original. That would be something to look forward to.

As Fred Clark’s ongoing series illustrates, the actual original Left Behind series is seriously flawed not only in the obvious sense that it does highly dubious things with the Bible, but also in the sense of being weak literature with unconvincing characters and plots.

If this were to be a genuine reboot – as in, for example, Tim La Haye sold away his rights to J. J. Abrams who could now do whatever he wanted with the story – what would you hope to see happen?

My first addition would be to get David Duchovny and Gillian Anderson on board to be Mulder and Scully and imvestigate the strange disappearances.

I would also have the Antichrist be someone capable of reading the Bible and deciding not to do what it seems that Revelation predicts he must, in order to bring about a more favorable outcome for himself.

What would you change in a reboot of Left Behind, if you were one of the writers or producers?

October 20, 2012 More from the MYO Play-a-Thon
Recent Comments
25 Comments | Leave a Comment
"I think I can speak for all of us that we really appreciate all the ..."
John MacDonald Evangelicals and the Big Lie
"Thanks. I can't wait to share the full cover. Soon..."
James F. McGrath What Jesus Learned from Women Cover ..."
"Looks really good!"
Phil Ledgerwood What Jesus Learned from Women Cover ..."
"“Often wrong, never in doubt.”I’ve seen this printed on tees, needle pointed on pillows, and ..."
Tony Wilson White Supremacy, Christianity, and the Capitol ..."
Browse Our Archives
get the latest from
Religion Prof: The Blog of James F. McGrath
Sign up for our newsletter
POPULAR AT PATHEOS Progressive Christian
1