How can something so wrong feel so right? Variety reports “Nicolas Cage in talks to star in ‘Left Behind’ reboot“: 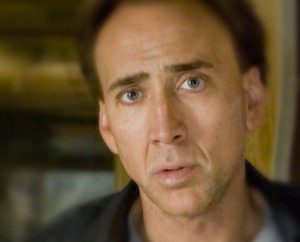 Nicolas Cage is in negotiations to topline “Left Behind,” a mainstream reboot of the Christian-themed movie trilogy that will mark the first film from Stoney Lake Entertainment, a new production company led by Paul Lalonde of faith-oriented banner Cloud Ten Pictures.

The “Left Behind” franchise is based on the series of books written by Tim LaHaye and Jerry Jenkins that have sold more than 65 million copies worldwide.

… The Christian-themed “Left Behind” reboot will follow a group of survivors during the first few hours after the Rapture.

The original trilogy, which launched in 2001, starred Kirk Cameron.

The reference to Cam-Cam there is surely misleading. Cage is 48 years old. Cameron played Cameron — Buck Williams, the Greatest Investigative Reporter of All Time  — and the 30-year-old reporter would be a stretch for Cage.

So does this mean Cage is set to play Rayford Steele? He wouldn’t be my first choice for the misogynist, pompous, repressed and hilariously un-self-aware pilot. For Rayford, I’d look for someone more like a young Fred Willard- or Mitt Romney-type, though I’m not sure who that would be in Hollywood today.

But then again, the primary characteristic of Rayford Steele is that he’s creepy — and Nicolas Cage is really good at creepy. So maybe that could work.

The ideal Left Behind role for Cage would be Dirk Burton — Buck’s paranoid, conspiracy-theorist “source” from the first book. Unfortunately, Dirk only appears briefly before he’s murdered by the conspiracy of international [don’t say ewish-Jay] financiers in a tangential sub-plot that is quickly forgotten and then made irrelevant to the story.

I could also see Cage as Bruce Barnes — especially as sweaty, disheveled, sleep-deprived Bruce. Bruce Barnes would be a lot more fun with a dose of H.I. McDunnough.

But how about Nicolas as Nicolae?

I would enjoy that. I would pay cash money to go and see that in a movie theater. I’m rather fond of Gordon Currie’s scenery-chewing, campy turn as the Antichrist in the original awful trilogy of movies. I think Cage could start there and crank it up to 11.

And the movie would benefit from making Nicolae Carpathia the “topline” character. Unlike the story’s nominal “heroes,” Buck and Rayford, the Antichrist actually does things, and stories tend to be much more interesting when they focus on characters who do things rather than on characters who never, ever do.

Alas, the sketchy initial reports on this Left Behind reboot don’t provide any further detail on the casting of the film. Hollywood Reporter focuses on the director, “Stunt Icon Vic Armstrong,” and offers this tidbit on the upcoming movie:

The story will be more in the mold of a classic disaster film. The plot unfolds during the first few hours after the Rapture and focuses on the survivors.

Filmophilia, Collider, FirstShowing, Film School Rejects and /Film all chime in on the news, but don’t add much detail to the Variety report. While Zack Hunt at American Jesus is hoping for more of a Left Behind/National Treasure mash-up:

My only hope is they tweak the story a little bit and Nicolas Cage ends up having to steal the Lamb’s Book of Life from heaven because there’s a secret map hidden inside that can save the world from Armageddon.

So let’s have some fun. Let’s either ignore this project’s reported small budget ($15 million is, in Hollywood terms, a small budget) or else pretend that every actor in tinsel-town is in the same desperate financial straits as Cage, and let’s cast this reboot.

In the event that Tim Burton can be convinced to direct, then I’d be quite pleased to have Johnny Depp as Nicolae, Helena Bonham Carter as Hattie, Bill Murray as Rayford, and Mark Wahlberg as Buck Williams. That would be fine, too.

October 20, 2012 Saturday salmagundi
Recent Comments
100 Comments | Leave a Comment
"I looked in on "Please don't eat the chimpanzee."The illustrations for the vision... I think ..."
Shadsie May 21 Flashback: Southern Baptist shrimp
"I thought Sonic was supposed to be a hedgehog. *Checks* Hedgehogs have pointy incisors. But ..."
Marja Erwin Oops
"I need a pick-me-up, so here's some Art Nouveau beauty: three pitchers, three different themes.First ..."
Jenny Islander Oops
"I won't bother the list with the details of what went down over the past ..."
Jenny Islander Oops
Browse Our Archives
Related posts from slacktivist