I’ve been wanting to post some thoughts that came up in my class on the Bible last week. We were discussing the Book of Ruth, which itself challenged Israelite laws and prejudices aimed at Moabites (that itself is a message that some Christians seem not to have grasped). In the process of discussing Ruth, the law pertaining to gleaning obviously came up, and so we took a look at the law in Leviticus requiring landowners to leave the edges of their fields ungleaned so that the poor could come and help themselves. Here’s what Leviticus 19:9-10 says:

When you reap the harvest of your land, do not reap to the very edges of your field or gather the gleanings of your harvest. Do not go over your vineyard a second time or pick up the grapes that have fallen. Leave them for the poor and the foreigner. I am the Lord your God.

This, it soon became evident, is a particularly clear example from the Bible of the sort of thing the wealthy in America are prone to denounce as “redistribution.”

If it is your land, and your crops, then who has the right to tell you to leave the edges for someone else? It is your property, and if it goes to serve the needs of others, that can only legally and legitimately be as a free act of charity on your part as owner. Right? 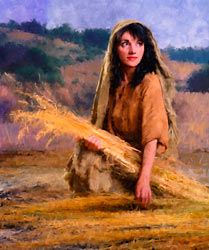 Not according to the Bible. The land, Biblical authors regularly assume and sometimes state, is regarded as God’s, not anyone else’s. And so you are immediately demoted from landowner to tenant. And as such, it is not your decision what to do with crops grown on God’s land. That’s fairly consistently the view that the Biblical authors adopt.

These were not suggestions. They were laws, intended to govern the nation. Whether their national life was overseen by kings, prophets, priests, judges, or local elders in a given period, there was an understanding that this was legislation, and that the community was responsible for observing it, and for enforcing it.

My point is not that we should start observing the laws of ancient Israel. But since there are those who insist that the Bible’s teaching is entirely about personal charity freely given, and never about social regulations and legislation aimed at providing systemic measures to address poverty, ones that infringed on what modern Americans consider their inalienable and inviolable right to personal property, I thought it worth taking a closer look at this particular law. Can anyone really claim that it doesn’t enact concern for the poor at the expense of notions of personal property that modern capitalists take for granted – but ancient Israelites apparently did not?

Lest anyone dismiss this as “merely the Old Testament,” it is to be noted that we see a similar concern for matters of social justice in early Christianity, in their practice of selling of property to help those in need.

On a somewhat related note, my pastor is currently in South Africa, and will be learning about the role of the church in the Apartheid and post-Apartheid eras, and he will be blogging about his experiences there.

October 16, 2012 Support for Christopher Rollston: Update
Recent Comments
13 Comments | Leave a Comment
"African Americans are Americans, not Africans. It should not be suggested to them that they ..."
Roger Morris White Christianity and Disney Princess Theology
"It is ironic that the same people who can't let go of the Confederate past, ..."
CroneEver White Christianity and Disney Princess Theology
"Is this particular section of Jubilees preserved only in Ethiopic or perhaps Latin? It's not ..."
robrecht Was Paul Uninterested in the Historical ..."
"What actual tangible authentic and original first century originated evidence can you reference?Every word attributed ..."
rationalobservations? Was Paul Uninterested in the Historical ..."
Browse Our Archives
get the latest from
Religion Prof: The Blog of James F. McGrath
Sign up for our newsletter
POPULAR AT PATHEOS Progressive Christian
1